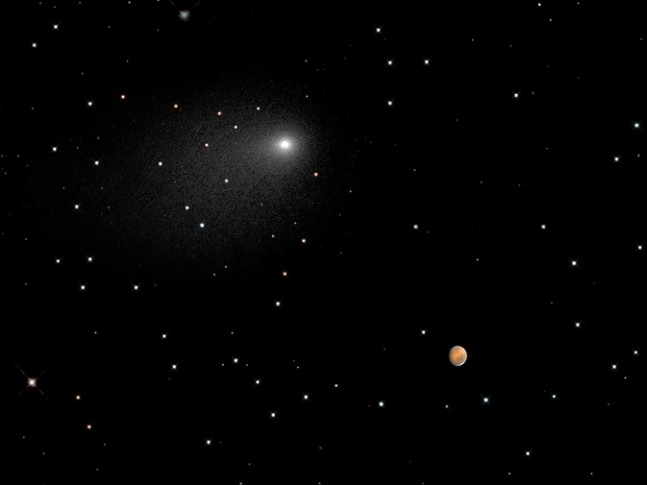 NASA’s fleet of Martian orbiters were poised at the ready, turning their cameras to the skies in hopes of catching a glimpse of comet Siding Spring on Oct. 19. In this historic flyby, Siding Spring made the closest pass of any known comet to the Red Planet. Scientists took advantage of this opportunity and collected unprecedented data and images, which showed the comet has a smaller than expected nucleus. The two operational rovers on the Martian surface also pitched in, providing the first-ever view of a comet from another world.

The Hubble Space Telescope (HST) took several images of the comet as it made its approach. NASA combined these photos to produce a single image, highlighting the distance between the comet and the Red Planet. While the comet’s nucleus is far too small for Hubble to image it, the coma can be seen as a bright cloud of dust, and Hubble was even able to capture the comet’s tail. Comet Siding Spring as seen from the Opportunity Rover, on the Martian surface. Image Credit: NASA/JPL-Caltech

The Mars Exploration Rover (MER) robotic geologist Opportunity has been operating on the surface of Mars for a decade now. Researchers employed the automaton’s Panoramic Camera or “PanCam,” to capture the comet about 2.5 hours prior to its closest approach. At its closest approach, comet Siding Spring was 87,000 miles (139,500 kilometers) from the Red Planet. By that time, it was dawn and the sky was too bright for Opportunity to take any more pictures.

“It’s excitingly fortunate that this comet came so close to Mars to give us a chance to study it with the instruments we’re using to study Mars,” said Opportunity science team member Mark Lemmon of Texas A&M University, who coordinated directing the rover’s camera. “The views from Mars rovers, in particular, give us a human perspective, because they are about as sensitive to light as our eyes would be.”

Comet Siding Spring was discovered in 2013, and is the first known Oort Cloud comet to be observed. NASA’s three orbiters (MRO, Odyssey, and MAVEN), together with its two rovers (Opportunity and Curiosity), as well as other Earth-based instruments have been analyzing the comet in great detail. Scientists used this flyby as an opportunity to see how the orbiters were affected by passing comet debris and if the comet had any impact on the Martian atmosphere. All data indicates that NASA’s orbiters were unscathed by the brush with Siding Spring.

NASA’s newest Mars resident, the Mars Atmosphere and Volatile EvolutioN (MAVEN) spacecraft, is the first of its kind to solely study the upper Martian atmosphere. Two days before the historic close-encounter, MAVEN used its Imaging Ultraviolet Spectrograph (IUVS) and was able to photograph hydrogen surrounding the comet. Comets are known for being surrounded by clouds of atomic hydrogen. This is a direct result of their icy nucleus losing water. As the comet approaches the Sun, any water present vaporizes and is broken down into its constituent parts – hydrogen and oxygen. The resulting hydrogen atoms scatter ultraviolet light from the Sun, and this is what the IUVS detects. The image produced shows a hydrogen cloud that could be seen up to 93,000 miles (150,000 kilometers) from the comet’s nucleus. Scientists expect that gas from the comet would be traveling at speeds of up to 125,000 mph (56 kilometers/second), and at the rate, would have direct contact with the Martian atmosphere. Further analysis from MAVEN will tell us if this had any impact on the atmosphere.

The Hubble Space Telescope (HST) took several pictures of the comet as it made its approach. NASA combined the images to produce a single image, highlighting the distance between the comet and the Red Planet. The comet’s nucleus is far too small for Hubble to image it, but the coma can be seen as a bright cloud of dust, and Hubble was even able to capture the comet’s tail.

Mars Odyssey is the longest-living Martian robot, and has been orbiting the Red Planet since 2001. Odyssey received a clean bill of health following the encounter and is still performing nominally.

“The telemetry received from Odyssey this afternoon confirms not only that the spacecraft is in fine health but also that it conducted the planned observations of comet Siding Spring within hours of the comet’s closest approach to Mars,” said Odyssey Mission Manager Chris Potts of NASA’s Jet Propulsion Laboratory located in Pasadena, Calif., speaking from mission operations center at Lockheed Martin Space Systems, Denver.

Following an orbital maneuver, ensuring the older orbiter was shielded from the comet, Odyssey used its Thermal Emission Imaging System (THEMIS) instrument to observe the dirty cosmic snowball. Data collected has not yet been released, but is expected to include images of the comet as well as Mars. Odyssey also employed its Neutron Spectrometer and High Energy Neutron detector to observe any potential effects the comet had on the atmosphere. Meanwhile NASA’s Mars Reconnaissance Orbiter (MRO) has provided more data about the Red Planet than any other Martian mission to date. The orbiter continues to operate nominally and is reported to be in good health following its comet encounter.

MRO’s fleet of instruments collected data before, during, and after the flyby. Downlink of the data is underway and will take some time to sort through and process. Scientists are hoping to learn about the effects of gas and dust from the comet’s tail will have on the atmosphere.