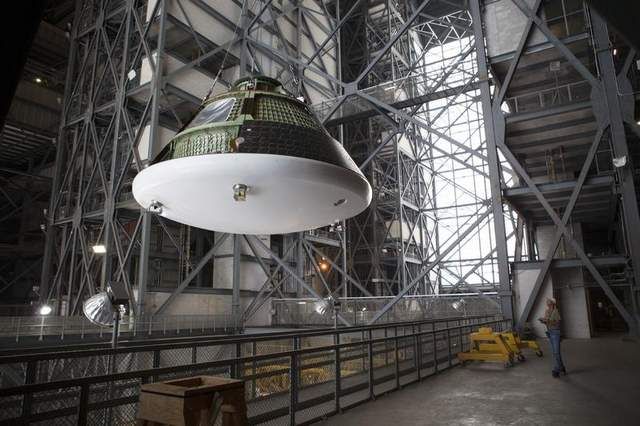 CAPE CANAVERAL, Fla — The first flight of NASA’s next-generation deep space exploration spacecraft, the Orion Multi-Purpose Crew Vehicle – will have to wait a while longer before hitching a ride to orbit. Sources are reporting that the busy 2014 launch manifest at Cape Canaveral Air Force Station has caused the launch of Orion to slide to no-earlier-than December 4, 2014. When liftoff occurs it will see an unmanned flight test article of Orion ascend atop a United Launch Alliance (ULA) Delta IV Heavy rocket from the Cape’s Space Launch Complex 37 in Florida.

SpaceFlight Insider’s Scott Johnson received confirmation from within NASA that the launch had in fact slipped. NASA, who has not yet released official confirmation, intimated that the slide was do to scheduling conflicts on the range. The launch had been scheduled to take place on September 18.

ULA has a very busy year in terms of providing launch services. The Colorado-based company has some 15 launches total on the 2014 launch manifest.

The Delta IV Heavy is not the permanent launch vehicle planned to start Orion on the initial leg of its journey. That task has been given to the space agency’s massive new heavy-lift booster – the Space Launch System or “SLS.” The first flight of SLS is currently scheduled to take place in 2017. NASA wanted to shake out some of Orion’s systems in a flight test first and needed the currently most-powerful launch vehicle in the U.S. arsenal – the Delta IV Heavy.

This Delta IV Heavy is, in some ways, three rockets in one – as it is comprised of three Common Booster Cores or “CBCs.” A single CBC, in various configuration is what is known as a Delta IV Medium rocket.

EFT-1 should see Orion travel out some 3,600 miles beyond the orbit of Earth (by comparison the International Space Station orbits at about 250 miles). It will then return, reentering the Earth’s atmosphere at speeds reaching 20,000 miles per hour. The EFT-1 mission will be conducted to check out the spacecraft’s avionics, heat shield and other systems before an actual crew fly on the vessel. NASA has done similar tests in the past, EFT-1 bears a close resemblance to the Apollo 4 mission which helped provide NASA with the knowledge to land men on the Moon.