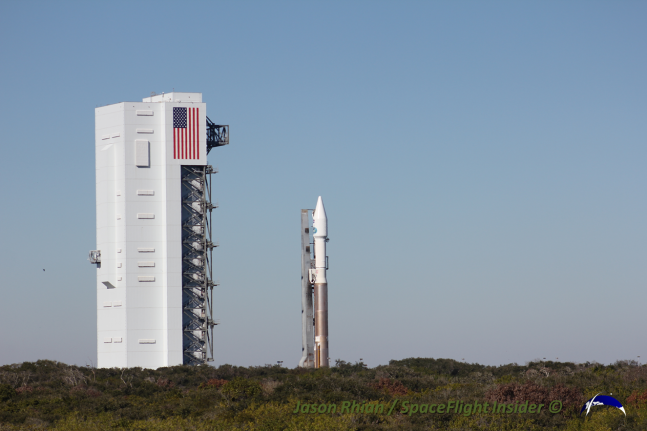 Launch preparations proceeded forward normally today, with the rocket and its payload rolled out from the Vertical Integration Facility, adjacent to SLC-41 – to the launch pad at 10:32 a.m. EST. If everything continues to go as planned, ULA and NASA will have some 40 minutes to get off the pad. Current weather conditions have provided the launch team with a 90 percent chance of favorable conditions in which to launch. This version of the venerable Atlas booster has a four meter fairing, no solid rocket boosters and a single engine in the rocket’s upper stage (Centaur). It marked the first launch of what could be a busy year for ULA, which currently has 15 missions on the 2014 launch manifest.

The TDRS Program was created in an effort to move the space agency away from a position of dependence on ground stations positioned at points around the globe. The first of these satellites was launched in March 1983 aboard space shuttle Challenger on STS-6. The TDRS Program had been conceived a full decade prior to that mission however, while the Space Shuttle Program was in its developmental beginnings. It was clear a new space vehicle called for diversified communications capabilities.

Since that time, NASA has used the spacecraft to provide communications with shuttle flights and International Space Station expeditions as well as unmanned missions such as the Hubble Space Telescope. One of the other benefits of this system was to increase the amount of information which could be relayed and received.

“The TDRS constellation brings back all of the data and video that we see every day from the International Space Station,” said Tim Dunn, NASA launch director. “TDRS also supports all of the data from the Hubble Space Telescope and all of our low Earth orbit NASA science missions.”

Despite the fact that some of these satellites were launched more than two decades ago, most are still operational to this day. TDRS 5 is the oldest operational satellite, having been launched during STS-43 (on space shuttle Atlantis) in 1991. The first satellite in the series (TDRS 1) was operational for nearly 27 years, and was decommissioned in June of 2010. The launch of TDRS-L will mark the first of the year for Colorado-based United Launch Alliance. Photo Credit: Jason Rhian / SpaceFlight Insider

To date, there have been some 10 launches conducted under the program. When started, TRW (now a part of Northrop Grumman) constructed the first six of the satellites as a subcontractor under the Space Communications Company in the 1980s and early 1990s. Not all has gone flawlessly for the TDRS Program; in fact, one of the TDRS spacecraft was lost on the final flight of Challenger, STS-51L, in 1986.

After STS-51L, the next five TDRS spacecraft were launched on other space shuttle missions. Between 2000 and 2002 three more were launched – all atop Atlas launch vehicles. At present time, TDRS 5 through 11 are operational, and each are positioned in a geosynchronous orbit approximately 22,230 miles above the Earth. The latest generation of the TDRS satellites have been built by Boeing Space Systems. The four meter fairing containing the TDRS-L spacecraft is seen in this image here. Temperatures dropped to the mid 30s the day prior to launch. Photo Credit: Jason Rhian / SpaceFlight Insider

According to NASA’s TDRS website, while the TDRS Project Office at Goddard Space Flight Center in Greenbelt, Maryland, is in charge of the development of satellites, TDRS is the responsibility of the Space Communications and Navigation (SCaN) office, located within the Human Exploration and Operations (HEO) Mission Directorate at NASA Headquarters in Washington D.C. The satellites are managed by the Space Network Project at Goddard Space Flight Center. The next satellite in the third-generation TDRS series, TDRS M, is scheduled to launch during 2015.

“Everything’s been going very smoothly with this because we had had the experience of TDRS-K so this has very smooth,” said Brett Perkins, launch site integration manager at Astrotech. “It’s fun when everything goes right and so far the flow has gone really smoothly. The fact that nothing has gone wrong with this flow took a lot of the stress out of it.”