NASA designing its own ‘flying saucer’ for future Mars missions 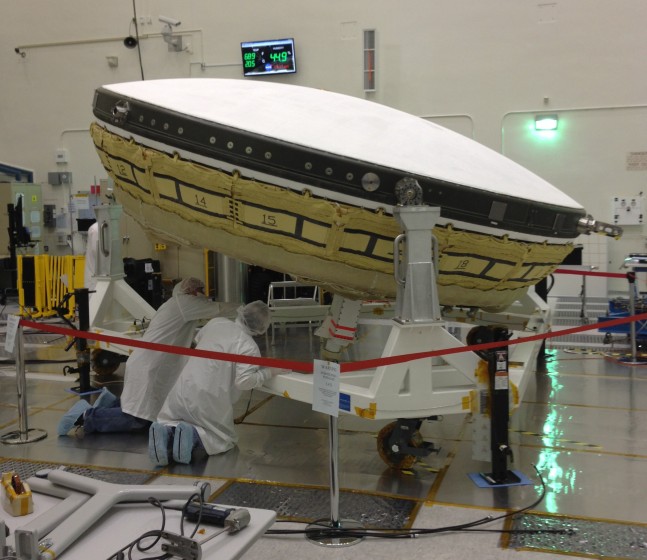 It may sound like something from a movie but it’s not – NASA is working on building its own version of a “flying saucer” for a future mission to Mars. The disk-shaped spacecraft would be used to transport heavy payloads and even people down to the surface, it was just reported in New Scientist.

The first tests of the new design will be conducted in June, over the island of Kauai, in Hawaii. The prototype of the spacecraft, called the Low Density Supersonic Decelerator (LDSD), will be launched into the stratosphere from the US Navy’s Pacific Missile Range Facility on Kauai.

So just how would this work, and why is it needed? As Allen Chen at NASA’s Jet Propulsion Laboratory in Pasadena, California, explains:

“It may seem obvious, but the difference between landing and crashing is stopping. We really only have two options for stopping at Mars: rockets and aerodynamic drag.”

The inflatable spacecraft would help heavy payloads like large rovers, other equipment or people to land on the surface safely, including in mountainous or other rougher terrain. The Martian atmosphere is so thin that parachutes won’t work in those cases. But the atmosphere is still thick enough that rocket-powered landings are difficult as well because of the turbulence. Previously, NASA has used parachutes, airbags or rocket engines for landing various landers and rovers. In the case of Curiosity, the largest rover so far, a unique combination of parachutes and retro-rocket-powered landing gear called the sky crane was employed for the first time, with much success. Artist’s conception of the stages of the LDSD system in action. Image Credit: NASA

But Curiosity was already pushing the limits of how heavy a payload could be land on Mars with that technology. Something different would be needed once again for even more ambitious missions. That’s where LDSD comes in. It consists of two main parts, a balloon-like decelerator and a huge parachute; the parachute is twice as large as the one used for Curiosity, about 109 feet (33.5 meters) across, in order to handle entry into the thin Martian atmosphere. The decelerator is attached to the outer rim of a capsule-like entry vehicle. To slow down in the atmosphere, it rapidly inflates to increase surface area when the capsule reaches a speed of Mach 3.5. The capsule can then slow down Mach 2, after which the parachute is employed.

“Personally, I think it’s a game-changer. You could take a mass to the surface equal to something like 1 to 10 Curiosities,” said Robert Braun at the Georgia Institute of Technology in Atlanta. “Think about it like a bridge for humans to Mars. This is the next step in a sequence of technologies that would need to be developed.”

In this first test of the new system, a test vehicle coupled with the LDSD will be lifted to a height of 23 miles (37 kilometres) above the ocean with a high-altitude balloon. To gain more altitude, the vehicle will use a small rocket to reach 34 miles (55 kilometres). As it then starts to fall back to Earth, the system will (hopefully) inflate and then the parachute will open. If all goes well, the vehicle will then make a soft landing on the water. Three more test flights in Hawaii are planned for after this first one, after which mission managers will decide what types of follow-up testing should be done.

Let anyone who doubts the genius that we Americans are fortunate to have in NASA engineers take heed.