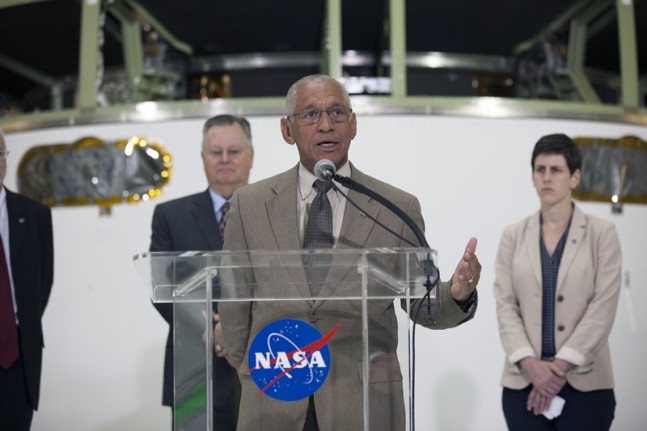 KENNEDY SPACE CENTER, Fla. — In approximately six months, NASA’s Orion spacecraft will launch atop a Delta IV Heavy rocket for a two orbit, four hour trip beyond low-Earth orbit and back. This initial test flight, dubbed Exploration Test Flight-1 (EFT-1), is an integral step in NASA’s path to Mars and will show how Kennedy Space Center is being transitioned into a multi-user space port.

NASA Administrator Charlie Bolden helped kick off the six month countdown during a visit on June 18 to Kennedy Space Center’s Operations and Checkout Building (O&C) high bay. Orion is designed to take astronauts further into space than ever before and its first mission, EFT-1, is slated to launch on December 4, 2014 from Cape Canaveral Air Force Station’s Space Launch Complex 37. Bolden reviewed and spoke with the media about what Orion would accomplish during its December mission. Photo Credit: Keith Rudroff / SpaceFlight Insider

During this first flight, the vehicle will travel out into space fifteen times further than the space station is now and will provide the ultimate test for computer systems, parachutes, the launch abort system (LAS) and the heat shield. These systems are crucial to a future crews safety and must be put through the ringer on the ground before they can be tested in space.

The Orion spacecraft is proof that the U.S. is still moving forward and exploring. The designs for this upcoming mission will be integral in laying the foundation for future missions.The team has already seen ways to improve the vehicle for the EM-1 and EM-2 missions, and has even discovered ways to make parts of the vehicle lighter and more cost-effective.

Mark Geyer, Orion’s Program Manager said “Orion will look remarkably similar for Exploration Missions 1 and 2. All of the systems that are flying on EFT-1 were designed from the beginning to be human-rated, to be able to fly people on board.”

At the beginning of June, Orion’s heat shield was attached to the crew capsule. Measuring in at 16.5 feet in diameter, this is the world’s largest heat shield and is one single sheet of Avcoat ablator. This heat shield will be capable of withstand the searing heat of reentry as Orion will be traveling at speeds up to 20,000 miles per hour and will be subject to temperatures up to 4,000 degrees Fahrenheit.

On June 10, 2014 Orion’s crew module was stacked on top of the service module in the Final Assembly and System Testing (FAST) cell. Here the service and crew modules will undergo a final series of rigorous tests before being fueled and stacked to launch.

Bob Cabana, Kennedy Space Center Director and retired astronaut spoke about Orion saying: “For the first time since we went to the Moon, we are standing a vehicle in this high bay that will travel beyond low-Earth orbit.”

He then went on to say: “We are all on our way to establishing a human presence in our solar system. When we do, we will be doing it from right here at Kennedy Space Center.” To record the most data, the vehicle will be equipped with approximately 1200 additional sensors than what comes standard. These extra sensors, along with various cameras throughout the capsule will be recording important data – especially in the areas of vibrations, temperature and event timing. Also, the avionics bay will contain a mass simulator, representing the flight control panel. This simulator will be important to see how the vehicle handles the mass.

If all goes well with Orion’s test flights, the vehicle will see crews climb aboard around 2020-2021. After this initial test flight in December, there will an additional mission, Exploration Mission-1 (Em-1) in 2017 and then the vehicle will undergo an Ascent Abort Test in 2018. These missions and tests are integral for the vehicle to be qualified for human travel.

When asked about the safety of the vehicle compared to the shuttle, Bob Cabana said: “This is going to be a much safer vehicle in the launch environment than the shuttle was. The team has done a great job and I would fly on it tomorrow.” Orion is equipped with a feature the shuttle didn’t have – a launch abort system (LAS). It will be the safest spacecraft and currently the only one with the capabilities of returning crews safely to the ground if an emergency occurs between launch and main engine cutoff (MECO). Although we hope all launches go smoothly, engineers need to ensure that the LAS jettison motor works perfectly, even when there is no emergency. Approximately six minutes, twenty seconds into the flight, the LAS will be one of 17 separations performed. This is a very important step as the LAS is stacked above the parachutes Orion needs to safely return to Earth.

One of the main concerns for any deep space mission is the crew’s exposure to radiation. During EFT-1, Orion will travel beyond the Space Station, to areas where Earth’s atmosphere and magnetic field can not shield the craft for the dangerous radiation levels found in space. The bulk of this first test mission will take place in areas of intense radiation, known as the Van Allen Belts. No crew has traveled through these belts since the Apollo missions and even then, the crews just passed through and didn’t stay long.

Earlier this year at the USA Science and Engineering Festival, NASA Administrator Charlie Bolden announced that Team ARES had won an Exploration Design Challenge (EDC) competition for their device that will help protect astronauts from radiation. Their design will fly on Orion during EFT-1 and will record data to see how well the design works.

Future crews will not stay in the Van Allen Belts for long periods of time, but deep space missions mean crews will be exposed for longer periods of time to radiation and this initial flight test will provide valuable data including where and when radiation levels peak.

With only 170 days until launch, Charlie Bolden described Orion as “a big deal. This is a tangible piece to Mars and Orion is going to travel farther into space than humans have gone in the last 40 years.”