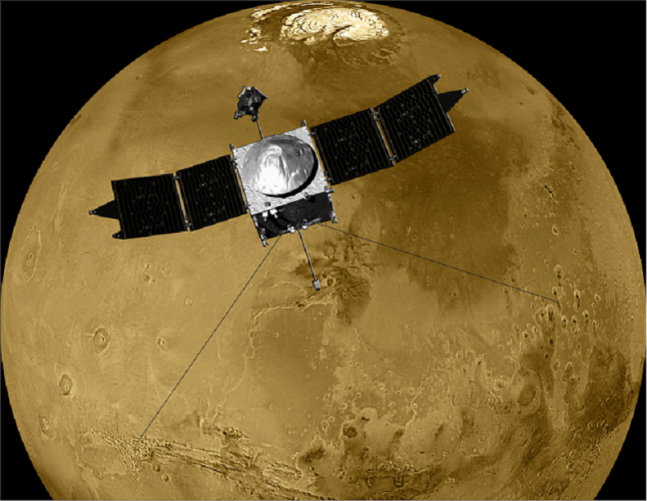 Artist’s rendition of the MAVEN spacecraft in orbit around Mars, with all of the booms deployed and instruments turned on. Credit: University of Colorado/NASA

NASA’s Mars Atmosphere and Volatile EvolutioN (MAVEN ) spacecraft arrived at Mars and inserted itself into orbit around the Red Planet on Sept. 22, 2014 at 22:24 p.m. EDT ( 0224 GMT). In that short time, the spacecraft has beamed back unprecedented views of the Martian upper atmosphere. MAVEN’s science instruments have been fully calibrated and its primary mission, which has not officially started, has already provided scientists with never-before-seen ultraviolet images of atmospheric oxygen, hydrogen, and even carbon coronas around the Red Planet.

MAVEN made the successful transition from a heliocentric to a Mars-centric orbit on Sept. 21, and is currently calibrating its instruments in preparation to begin its main science mission. MAVEN launched from Kennedy Space Center atop a United Launch Alliance Atlas V 401 rocket back in Nov. 2013, and is the first spacecraft solely designed to study the upper atmosphere of Mars. Scientists hope MAVEN will be able to answer the question of what happened to Mars’ atmosphere.

“All the instruments are showing data quality that is better than anticipated at the early stage of the mission. All instruments have now been turned on — although not yet fully checked out — and are functioning nominally,” said Bruce Jakosky, MAVEN’s principal investigator at the University of Colorado, Boulder. “It’s turning out to be an easy and straightforward spacecraft to fly, at least so far. It really looks as it we’re headed for an exciting science mission.”

MAVEN has two additional weeks of instrument calibration and testing scheduled before diving into her main mission. The vehicle’s primary mission is set to begin in mid-November, following successful testing of MAVEN’s Electra telecommunications relay. This will incorporate an end-to-end test of data transmissions between the Curiosity rover on the Martian surface, MAVEN, and Earth.

Three views of an escaping atmosphere, obtained by MAVEN’s Imaging Ultraviolet Spectrograph. By observing all of the products of water and carbon dioxide breakdown, MAVEN’s remote sensing team can characterize the processes that drive atmospheric loss on Mars. Image Credit: University of Colorado/NASA

The atmosphere on Mars today is very different from the one that we have on Earth. Scientists believe that a few billion years ago, Mars had an atmosphere like ours, one that was thicker, supporting higher surface temperatures, liquid water, and possibly even life. Something in the Red Planet’s history has caused the atmosphere to thin and determining the cause of this, could have implications for the future of the Earth’s atmosphere.

As MAVEN embarks on her primary science mission, she will be responsible for helping to determine what happened to Mars’ atmosphere and with her panel of science instruments, MAVEN will study water and carbon dioxide and the processes by which these compounds break up into their atomic components. Scientists will also be studying the amount of hydrogen, oxygen, and carbon in both the upper and lower Martian atmosphere.

By studying how the abundance of these elements change over time, will paint a bigger picture for scientists to see how they are disassociating and disappearing into space. During times of intense solar activity, here on Earth we enjoy a phenomena known as aurorae. The Sun emits an explosive flare, called a coronal mass ejection (CME) and solar energetic particles (SEPs)  interact with our atmosphere, creating a dazzling light show. The Northern Lights (Aurora Borealis) is the most well-known example of an aurora.

Despite their beauty, CMEs can be dangerous, especially to sensitive electronics on satellites and other orbiting vehicles. The same SEPs responsible for creating an aurora, are believed to be one possible cause of Mars’ disappearing atmosphere.

A recent solar flare was caught on film by two NASA satellites on opposite sides of the Sun. The flare occurred on Sept. 26, and was estimated to reach Mars on Sept. 29. MAVEN, equipped with its Solar Energetic Particle instrument, was ready for it. The geographical map showing the distribution of ozone in the southern hemisphere of Mars, imaged by MAVEN’s IUVS.
Credit: University of Colorado; NASA; LATMOS/CNES

David Larson, SEP instrument lead out of the Space Sciences Laboratory at University of California, Berkley, said, “After traveling through interplanetary space, these energetic particles, consist mostly of protons, deposit their energy in the upper atmosphere of Mars. A SEP event like this typically occurs every couple weeks. Once all the instruments are turned on, we expect to also be able to track the response of the upper atmosphere to them.”

The tenuous Martian upper atmosphere is composed of hydrogen and oxygen coronas. In this part of the atmosphere, right on the edge of space, atoms, like hydrogen and oxygen, collect. These atoms used to be part of near-surface carbon dioxide or water molecules. Something has disassociated the atoms, and they eventually escape into space. Molecules like carbon dioxide and water control the climate, so understanding how they escape is essential in understanding how Mars transitioned from a lush, wet planet to the cold, barren planet we see today.

Mike Chaffin, MAVEN Remote Sensing Team member from University of Colorado, Boulder, said “By measuring the extended upper atmosphere of the planet, MAVEN directly probes how these atoms escape to space. The observations support our current understanding that the upper atmosphere of Mars, when compared to Venus and Earth, is only tenuously bound by the Red Planet’s weak gravity.”

MAVEN employs its Imaging Ultraviolet Spectrograph (IUVS) to scan the edge of the atmosphere for any sunlight reflected by the escaping atoms. With the help of IUVS, scientists have already created a preliminary map of atmospheric ozone. To date, this is the most complete picture of the upper Martian atmosphere ever created.

The majority of the Red Planet’s ozone is located in the southern hemisphere. This is due to the fact that ozone is obliterated by sunlight and water vapor. The south polar region of Mars, is extremely cold, and dark — the perfect conditions to support ozone.

Another member of MAVEN’s Remote Sensing Team, Justin Deighan, said, “With these maps we have the kind of complete and simultaneous coverage of Mars that is usually only possible for Earth. On Earth, ozone destruction by refrigerator CFCs is the cause of the polar ozone hole. On Mars, ozone is just as easily destroyed by the byproducts of water vapor breakdown by ultraviolet sunlight. Tracking the ozone lets us track the photochemical processes taking place in the Martian atmosphere. We’ll be exploring this in more complete detail during MAVEN’s primary science mission.”

Be sure to stay tuned to Spaceflight Insider for future updates on the MAVEN mission.

Just wanted to say that I am somewhat of a space enthusiast as well. I have a Google alert setup right now for spaceflight and your articles coming up time and time again. I just wanted to give you a huge thumbs up and keep up the good work!

I love the detail you put into them. I love the content and way it is formatted and relevant to the topic at hand. The writing style is great as well. Good Job from a fellow space enthusiast!

Thanks so much for that nice comment Sean! I really enjoy writing them, and I’m so glad you enjoy reading them. 🙂