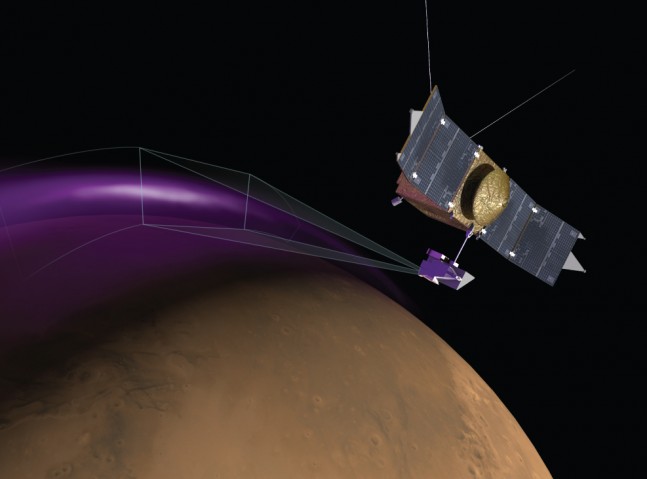 On March 17, 2015, skywatchers here on Earth were treated to a dazzling display of bright green aurorae, resulting from an intense geomagnetic storm. The following day, researchers presented the discovery of a similar light show on the red planet.

Nicknamed “Christmas Lights” because they were observed in late December 2014, the Martian aurora was similar but not identical to the ones we see on Earth. MAVEN’s Imaging Ultraviolet Spectrograph (IUVS) detected a bright ultraviolet auroral glow that covered the red planet’s entire northern hemisphere. Here on Earth, aurorae, also known as the northern or southern lights, are a result of energetic particles – mainly electrons and protons – crashing down into the atmosphere and causing the gas to glow.

Unlike the Earth, Mars has a very weak, sparse magnetosphere, with previous auroral activity observed in the planet’s region where the magnetic field is the strongest – the southern hemisphere. The Martian “Christmas Lights”, however, were unlike any aurora ever witnessed. Observed in several locations across Mars’ northern hemisphere, and much deeper into the Martian atmosphere than previous aurorae, the driving force behind the “Christmas Lights” remains a mystery. A map of IUVS’s auroral detections in December 2014 overlaid on Mars’ surface. The map shows that the aurora was widespread in the northern hemisphere, not tied to any geographic location. The aurora was detected in all observations during a 5-day period. Image Credit: University of Colorado

Bruce Jakosky, MAVEN principle investigator, said: “The data is just spectacular. The activity we’re seeing is not connected to magnetic regions. We don’t know if it is occurring only at the places we’re observing, or if it is globally distributed.”

The likely source of the energetic particles appears to be the Sun, as MAVEN’s Solar Energetic Particle instrument detected a influx of energetic electrons at the beginning of the aurora. At one time in its history, billions of years ago, Mars once had a magnetic field like the Earth, but somehow lost it – leaving the planet vulnerable to direct strikes from solar particles. The electrons powering the December aurora are more energetic and penetrate much deeper than the ones on Earth.

“What’s especially surprising about the aurora we saw is how deep in the atmosphere it occurs – much deeper than at Earth or elsewhere on Mars,” said Arnaud Stiepen, IUVS team member at the University of Colorado. “The electrons producing it must be really energetic.”

To the naked eye, the “Christmas Lights” aurora would not look anything like the aurorae we are used to witnessing here on Earth. Due to a lack of nitrogen and oxygen in Mars’ thin atmosphere, Martian aurorae may appear as a faint blue hue, but would most likely be invisible as the light would be in the ultraviolet portion of the spectrum. A recent geomagnetic storm helped to create a dazzling display of the northern lights on March 17, 2015. Photo Credit: NASA

Humans have been exploring the red planet for decades, yet our closest neighbor continues to surprise scientists. In addition to the puzzling auroral display, MAVEN detected an unusual and widespread dust cloud at altitudes from 93 miles (150 kilometers) to 190 miles (300 kilometers) above the surface. The source and composition of the dust cloud is still a mystery; however, researchers say it poses no threat to MAVEN and the rest of the Martian orbiters.

“If the dust originates from the atmosphere, this suggests we are missing some fundamental process in the Martian atmosphere,” said Laila Andersson of the University of Colorado’s Laboratory for Atmospherics and Space Physics (CU LASP), Boulder, Colorado.

MAVEN’s Langmuir Probe and Waves (LPW) instrument discovered the cloud, which in much denser at lower altitudes. Researchers have not yet determined if the cloud will be long-lasting, or if it’s just temporary. The cloud was first detected back in October 2014, when the spacecraft was prepping for an encounter with Comet Siding Spring.

Andersson stated, “We were looking for dust from Comet Siding Spring, and wanted to get a baseline.”

During the close encounter with the passing comet, MAVEN did not see an increase in the dust, but noted that it has been present throughout the spacecraft’s time at Mars. The cloud is present on the dayside of the planet and has been known to vary in intensity. Although the exact source behind the dust cloud is unknown, there are several possibilities. MAVEN detected a vast dust cloud in the Martian atmosphere which may or may not be related to the mysterious plumes amateur astronomers detected in 2012. Image Credit: NOAA

The dust cloud could be falling down from Mars’ two moons – Phobos and Deimos – or it could be wafting up into the atmosphere; it could be debris from comets, or even dust moving in the solar wind. So far, there is no evidence to support any of these possibilities.

“If the dust originates from the atmosphere, this suggests we are missing some fundamental process in the Martian atmosphere,” said Andersson.

MAVEN is part of the agency’s Mars Exploration Program, which includes the Opportunity and Curiosity rovers, the Mars Odyssey and Mars Reconnaissance Orbiter spacecraft currently orbiting the planet.

NASA’s Mars Exploration Program seeks to characterize and understand Mars as a dynamic system, including its present and past environment, climate cycles, geology, and biological potential. In parallel, NASA is developing the human spaceflight capabilities needed for its journey to Mars or a future round-trip mission to the Red Planet in the 2030s.