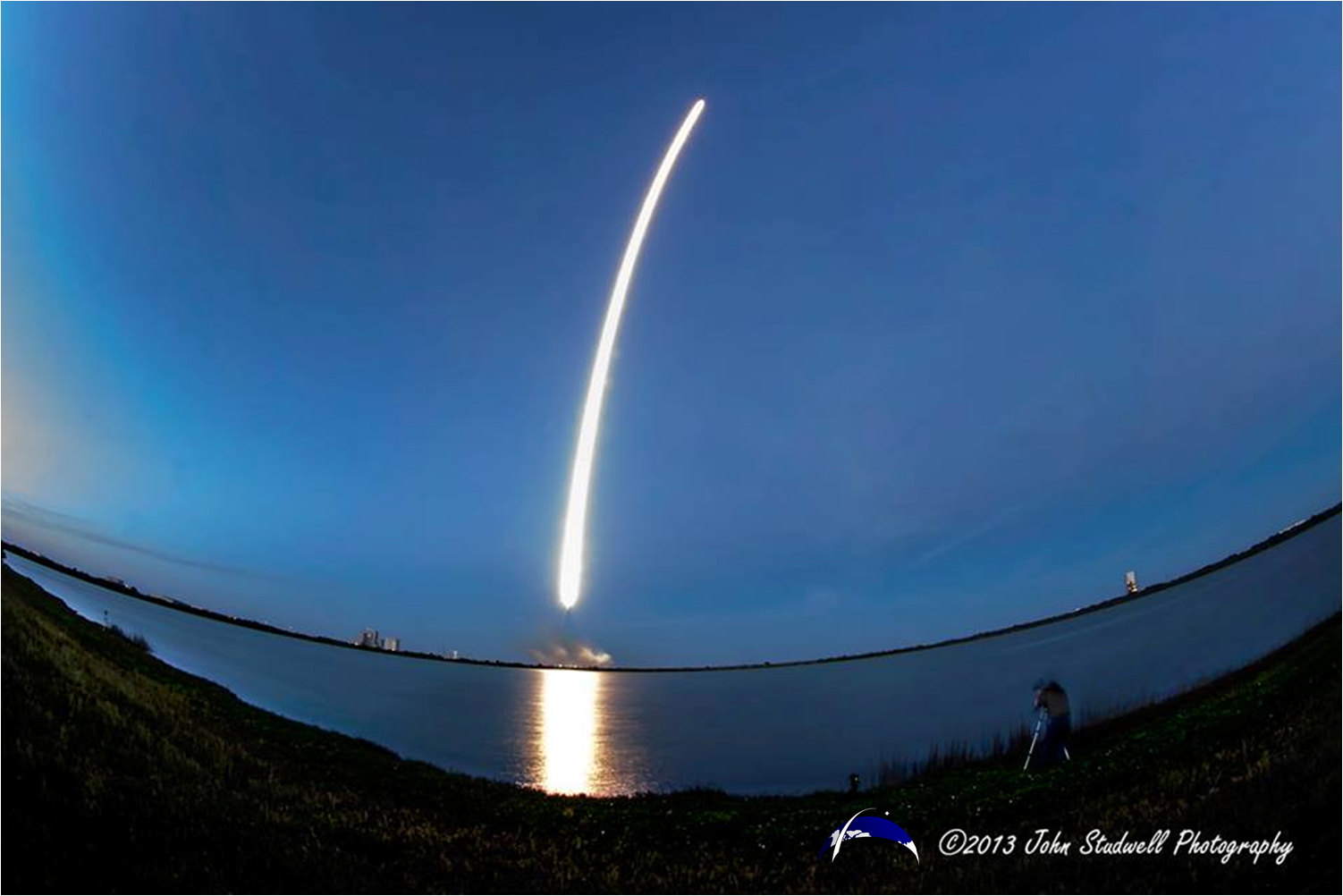 CAPE CANAVERAL, Fla — You can’t argue with success. That simple statement should be SpaceX’s motto. Today, December, 3, the Hawthorne, Calif., based aerospace firm launched the second of its Falcon 9 v1.1 rockets with the SES-8 communications satellite from Cape Canaveral Air Force Station’s (CCAFS) Space Launch Complex 40 (SLC-40) located in Florida. This was the first launch of this version of the F9 to take to the Florida skies. Flight engineers had to scrub the Monday Nov. 25 launch attempt due to issues with the F9’s first stage. It was decided to try again on Thursday, Nov. 28. However, when the first attempt on Thanksgiving failed to produce the desired result, prompting SpaceX’s CEO, Elon Musk, to issue the following tweet:

SpaceX worked the problem and tried again. However, it became clear, there would be no Thanskgiving Day launch.

With the first attempt shut down one second prior to launch, some were critical. However, like other launch systems, the Falcon 9 is controlled by a computer system designed to detect anomalies and to shut the rocket down if it detects anything abnormal. As this was the case, while it might have been inconvenient – it also likely prevented a potential loss of vehicle and payload.

The slender tube that is the body of the launch vehicle rose into the waning light of day, providing a new dawn to the surrounding area. The F9 v1.1 has upgraded Merlin 1D engines, stretched fuel tanks, and a payload fairing which uses a pneumatic system rather than one based on pyrotechnics to separate. The SES-b spacecraft will be the first satellite that SpaceX places into a geostationary orbit. Image Credit: SES / Orbital Sciences Corporation

SES-8 will be sent into a Geostationary Transfer Orbit (GTO) where the telecommunications satellite will provide services to South Asia and the Asia Pacific region. The SES-8 spacecraft will be the first satellite that SpaceX will place into a geostationary orbit. It will utilize the F9 v1.1’s upper stage to place it into a 295 x 80,000 km orbit at an inclination of 20.75 degrees. The satellite’s high performance beams will aid in supporting the exploding markets located in South Asia as well as Indo-China. It is hoped that the satellite will provide the ability to grow the direct-to-home or “DTH” market as well as provide very small aperture terminal (VSAT) and government applications. If all goes according to plan, SES-8 will send some 5 kilowatts of power to its 33 Ku-band transponders.

SES-8 reached its geosynchronous transfer orbit approximately 33 minutes after lifting off from the pad. The spacecraft was constructed by Dulles, Virginia – based Orbital Sciences Corporation. It is based off of the GEOStar-2 bus. The satellite, according to a release issued by SpaceX, will utilize a hybrid Ku- and Ka-band system and weighs in at approximately 6,918 lbs (3,138 kg). For one SES representative who attended one of the prior launch attempts, this mission

“Well, we’re very excited, this is our fifty-fifth satellite going to geostationary orbit. It’s a landmark for us and it’s a landmark to be working with SpaceX,” said SES’ Nita Wright who works with the company’s regional marketing division. “We have several launches lined up with SpaceX in the future, and, from a local perspective, I think everyone is excited about bringing this back to the Cape – so it’s great to be here.”

The day’s events were merely the final chapter in what has been a long narrative of milestones toward getting the SES-8 satellite off the pad and on its way to orbit. Once constructed, the two stages were sent for testing at the firm’s development facility located in McGregor, Texas. After beng checked out, the stages were sent individually over land to SLC-40. The fairing, which shielded the delicate spacecraft through the rigors of launch, was shipped separately to CCAFS. In this photo, the Falcon 9 v1.1 can be seen venting oxygen just after one of the launch attempts which took place Thanksgiving evening. Photo Credit: John Studwell / SpaceFlight Insider

For his part, SpaceX’s founder, Elon Musk has stated that his firm is pleased with how the F9 v1.1 has turned out.

“We’re very happy with the rocket’s design, it’s an incredibly capable vehicle. Even though it delivered 1.3 million pounds of thrust – they only were operated at about 85 percent of their potential. Down the road during future missions we anticipate being able to crank them them up to their full thrust capability which would give about 165,000 pounds of sea-level thrust- per engine. So, it’s really something that is, it can serve very well for the commercial launch markets or, certainly, for government satellites and for Dragon crew and cargo.”

Thirty days or so prior to the launch date, SES-8 arrived at the hangar located at SLC-40. During this period, SES-8 was processed, ensconced in the fairing and then integrated with the Falcon 9 v1.1. Nine Merlin 1D engines in the rocket’s first stage as well as a single Merlin 1D in the second stage powered the SES-8 spacecraft through Earth’s atmosphere and into orbit. Photo Credit: SpaceX

In terms of the Falcon 9, the final step toward liftoff was the static test fire, where the launch vehicle was walked all the way up to being released – just seconds away from launch. This included having the nine Merlin 1D engines activated. This static fire cleared the Falcon 9 for today’s successful launch.

This evening’s launch sequence happened as follow: Four hours prior to launch, the Falcon 9 v1.1 was fueled with liquid oxygen (the iconic plume which comes roiling off the rocket as the countdown commences – is liquid oxygen being vented from the tanks) and RP-1 kerosene propellant. Liquid oxygen has to be added throughout countdown.

At t-10 minutes, terminal countdown, which is autonomous, begins. The Launch Director conducted the poll for “GO” or “No-GO” at about two and a half minutes prior to the rocket launching off of the pad. At two minutes before liftoff, United States Air Force Range Safety cleared the range for launch.

Just one minute before launch, SLC-40’s water deluge system, which protects the Falcon 9 rocket and the pad from the extreme acoustics of launch is activated. As with so many SpaceX systems, this also has a nickname – “Niagara.” The deluge system’s moniker is well-earned as fifty-three water nozzles flood the area with 30,000 gallons (113,500 liters) – per minute. Given the power of the Falcon 9 v1.1 – every precaution is needed to control the estimated 1.3 million pounds of thrust that the nine Merlin 1D engines produce. These are activated a mere three seconds prior to liftoff. Once the Falcon 9’s flight computer verified that the everything was proceeding according to plan, it commanded that the restraints holding the rocket in place – be released. With that, the Falcon 9 was on its way to orbit. The Falcon 9 is named after the fictional Millennium Falcon from Star Wars as well as for the nine Merlin engines in its first stage.

The F9 passed through the densest part of Earth’s atmosphere, known as “Max-Q”, where, coupled with the launch vehicle’s speed, the rocket encounters the greatest amount of stress. This occurred at almost a minute and a half after liftoff.

Two seconds shy of three minutes into the flight, main-engine cutoff (MECO) took place and the two stages parted company, leaving the first stage to fall back to Earth. A few seconds later, the lone engine in the second stage roared to life starting a burn which lasted for almost five and-a-half minutes which placed SES-8 into its parking orbit. The fairing covering the satellite was jettisoned early during this burn. The colors of the rainbow, an illusion produced by the sun dipping below the horizon created a spectacular sendoff for the SES-8 mission. Photo Credit: Chris Haber / Chris Haber Photography

The SES-8 spacecraft spent about eighteen minutes in this parking orbit. Then the F9’s second stage reignited conducting a second burn which lasted for approximately one minute.

SES-8 was deployed some five minutes after the completion of the second burn. This occurred just 33 minutes after liftoff. For SES’s Chief Technology Officer, today’s events symbolized SpaceX’s arrival on the scene has been viewed by many.

“Let me put this very clearly and maybe not too dramatically, the entry of SpaceX into the commercial market  – is a game changer,” said SES CTO Martin Halliwell. Today’s flight served as a reaffirmation of the capabilities of the Falcon 9 v1.1 which encountered issues during the inaugural launch of the rocket, which took place on September 29, 2013.

“On the last flight everything worked really well, I think that we were very satisfied with this version of the F9 overall, with the one exception being the restart,” Musk said during a recent teleconference. “For this mission obviously the second burn has to work for it to be successful. Our analysis of the last flight, and SES agrees with us, that the igniter fluid lines froze due to a liquid oxygen bleed…we’ve since increased the insulation to those lines to ensure there isn’t a repeat on this flight.”

The Sept. 29 launch carried the CAscade, SmallSat and IOnospheric Polar Explorer (CASSIOPE) spacecraft to orbit for MacDonald Detwiller and Associates or “MDA.” It was a liftoff filled with firsts. It was the first SpaceX launch from Vandenberg Air Force Base in California, the first launch of the F9 v1.1 and the first non-NASA mission that the Falcon 9 had been tasked with accomplishing. The launch site was Vandenberg’s Space Launch Complex 4.

Given the success of this evening, it would appear that the efforts highlighted by Musk – have paid off.

“There’s no stone that we haven’t turned over at least twice,” Musk said during the teleconference. “We knew that we had done everything that we could think of.”