Opportunity: If there is life on Mars, it’s not throwing rocks 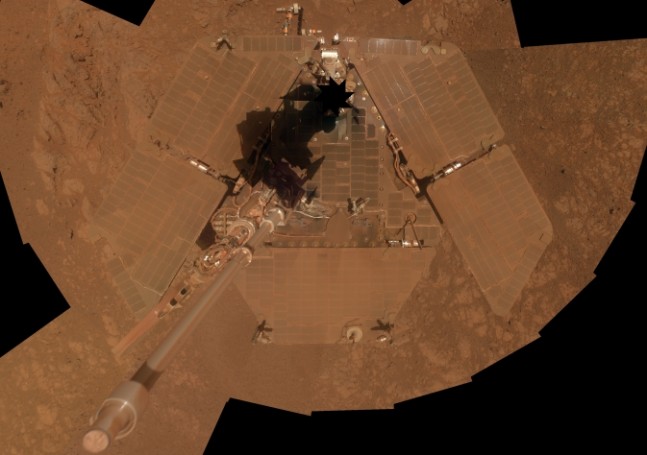 Neil deGrasse Tyson is fond of teasing Mars rover operators that if there were intelligent life on Mars they could very well be riding around on top of the rovers and we’d never know it. For the past few weeks that teasing gained traction in the public consciousness after the sudden appearance of a rock in the Mars Exploration Rover (MER) Opportunity’s field of vision that seemed to have materialized overnight. Was Dr. Tyson right? Was a Martian just out of sight flicking rocks where none had been seen before?

On December 26, 2013, Opportunity took a picture of the Martian landscape. On January 8, 2014, it took another picture of that same landscape, but something was off, something was different. Plainly seen in the center of the second frame was a rock that clearly had not been there before. Its white outer shell and deep red interior gained it the affectionate moniker of jelly doughnut, while its unusual coloration left onlookers all the more confused about where it came from. Opportunity’s tracks – and the “jelly-donut” rock which spurred so much controversy. Photo Credit: NASA / JPL / MSSS

NASA finally has an answer, and no, sadly, there does not appear to be corroborating evidence for Martians playing baseball this time. It would seem that as Opportunity made a turn just uphill from where the rock, unofficially called Pinnacle Island, was found, its forward wheel dislodged the stone and sent it tumbling down the bank.

“…we called it Pinnacle Island, it’s a dinky little rock, only some 4 centimeters wide. But it’s very unusual; it’s like nothing that we’ve seen in the last 10 years on the surface of Mars,” said James Rice PhD, an astro-geologist working on the MER team. “When we first saw it, someone said it looked like a ‘jelly donut’ – but I don’t think that’s accurate. It’s more like a Danish (laughs). At its center, it’s kind of red-colored. We’ve examined it with the APXS (Alpha Proton X-Ray Spectrometer) and its super-high in sulfur, magnesium and manganese. I mean, measurements that are higher than anything we’ve ever seen before. What we think happened is when Opportunity turned around, one of the rover’s wheels popped the rock to where it currently is at. We’re not entirely certain, but we think it got to its present location when Opportunity conducted a turn in place.”

The rock’s distinctive appearance is the result of elements like manganese and sulfur, which are common in rocks formed in water. The accidental discovery allowed scientists the chance to look at rock surface that may very well have been hidden from daylight for millions of years.

With this curious mission accomplished, Opportunity is set to head south to investigate some exposed rock further uphill. Just passed the trough of the Martian winter, Opportunity expects to benefit from increasingly greater energy from its solar array over the coming weeks. The rovers’ unique wing-shaped solar panels provide more surface area to collect the weak Martian sunlight. That also means more area to get covered in the fine, reddish dust. Engineers expected dust to accumulate on the panels and that the rover would have perished years ago – something that has yet to happen. Image Credit: NASA

The rover was launched in 2003 with an expected mission length of approximately 90 days. It is now in its eleventh year of operation, outlasting even its twin (Spirit) which operated from 2004-2010. Over the course of the lives of both of the robotic explorers, precursors to the larger Mars Science Laboratory rover Curiosity which launched in 2011 and landed in August of the following year, they have contributed to a greater understanding of the Martian surface and its capacity to sustain water and possibly even life.

Both MER rovers were carried out of Earth’s gravity well atop the venerable Delta II launch vehicle, which recently celebrated its 25th year of service. The launch site where these iconic spacecraft started their missions from was Cape Canaveral Air Force Station’s Space Launch Complex 17 in Florida. It is unknown how much more time Opportunity has left or what else it might discover in the interim.

“Nobody knew that back when the rovers landed in January of 2004 that they’d still be going after all that time. We thought if we might be going around 120 days and if we got lucky maybe 180 days – but no one thought that this far our down the road that we’d still be operating, making discoveries and doing great science up there. I think it’s a testament to the engineers who built these vehicles,” Rice said.

Once again, NASA engineering genius at it’s finest! A rover that was hoped to last maybe 6 months, still going strong after 10 years. Imagine if you purchased an automobile expecting it to last 8 to 10 years, and it was still going strong at 80 years! (But in all fairness, the tank-busting potholes in the roads here in Detroit are probably far worse than anything to be encountered on Mars – short of a tumble down the Valles Marineris.)