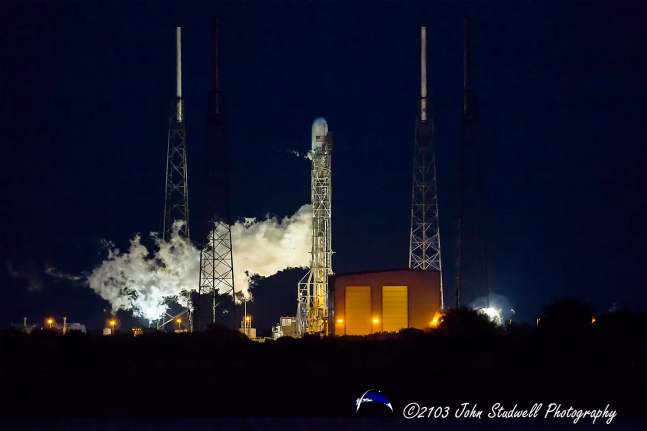 The launch of a SpaceX Falcon 9 v1.1 rocket from Cape Canaveral's SLC-40 - has been postponed due to issues with the launch vehicle's fairing. This is according to a report from NASASpaceFlight.com. Photo Credit: John Studwell / SpaceFlight Insider

CAPE CANAVERAL, Fla — With SpaceX planning to launch one of its Falcon 9 rockets from Cape Canaveral Air Force Station (CCAFS) on January 3, 2014, we thought that now would be a good time to provide you with what we think are the best spots from where to watch the launch. CCAFS covers many, many miles – and some sites, while great to watch the liftoff of an Atlas V or a Delta IV, are poor spots to watch the Falcon take to the skies. SpaceX’s Falcon 9 rocket has been very successful with no major problems cropping up during the rocket’s seven flights. Photo Credit: SpaceX

From our collective experience, there are only a handful of spots that provide a (mostly) unobstructed view of Space Launch Complex 40 (the launch site for SpaceX’s Falcon 9).

Playalinda Beach: So you’re in town and you aren’t familiar with the area – where do you go? That’s a simple question to answer. One of the best places to watch the launch of a Falcon 9 from is Playalinda Beach. For those in Florida, the sights and sounds most closely associated with the Sunshine State may make this your spot. You get to see the surf and sand of the beach, and then a launch. However, in terms of this particular launch, you might be out of luck as it closes at sunset. It only costs $5.00 per car to get in. To find out more, you can call Playalinda Park at 321-267-1110.

Directions: If you are coming from U.S. HWY-1 via Titusville, turn right at Garden Street/Route 406. Go across the A. Max Brewer Parkway Memorial Bridge. Follow it to the end – and you’re there.

Port Canaveral: This is one of the best spots to view the launch of the Falcon 9. Even better? It is free! It also is one of the best places to watch the launch from without going to a crowded tourist destination. It also is incredibly easy to find, as well as filled with spots to park. All you need to do is park along SR-528 in the Port/Cape Canaveral area. One needs only to look for the cars parked along the side of the road.

Directions: What was once known as the “Beeline” has since been renamed the “Beachline.” It is also a straight shot into the Port/Cape Canaveral area. You can get a bit closer to the action by taking the “Exit A North Terminals” exit (it will also direct you toward Route 401) across a small drawbridge, and around a curve. However, this is as close as you are likely to get (points afterward are past a guard shack, which leads into Cape Canaveral proper).

Kennedy Space Center Visitor Complex: For those wanting “the full experience,” one needs only to go to the Kennedy Space Center Visitor Complex. From here you can see space shuttle Atlantis (as well as numerous other spacecraft, rockets and even an astronaut or two). However, entrance fees can be a bit pricey, and the view is not as good as what one would have from the two other spots listed above.