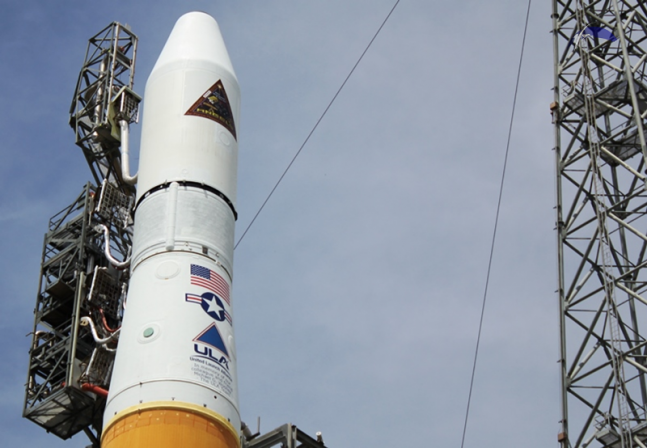 The launch of a ULA Delta IV Medium rocket has been postponed by 24 hours due to ground support issues. Photo Credit: Jason Rhian / SpaceFlight Insider

CAPE CANAVERAL, Fla — The launch of a United Launch Alliance (ULA ) Delta IV Medium+ 4,2 carrying the AFSPC-4 mission was scrubbed today due to problems with the ground support equipment environmental control system that are used to support the launch vehicle prior to liftoff.

Launch is now scheduled to take place on Thursday, July 24. This is dependent on the root cause of the issues are discovered and corrected in time. If so, launch will take place at 6: 59 p.m. EDT (2259 GMT). At present, the only other issue which could impact the launch is the weather. Currently, weather conditions have only been given a 30 percent chance favorable conditions.

The AFSPC-4 mission is comprised of two Geosynchronous Space Situational Awareness Program (GSSAP) satellites which will be delivered to near-geosynchronous orbit as well as the Automated Navigation and Guidance Experiment for Local Space (ANGELS) satellite.