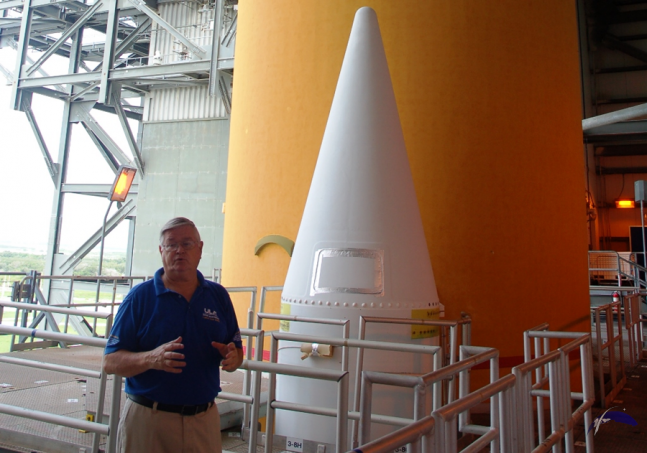 Mike Woolley conducts a tour of Space Launch Complex 37 in 2011 with the Delta IV that carried the GPS IIF-2 spacecraft to orbit in the background. Photo Credit: Jason Rhian / SpaceFlight Insider

CAPE CANAVERAL, Fla — United Launch Alliance dedicated yesterday’s AFSPC-4 flight to Michael G. Woolley. Known for his calm and highly-professional demeanor and was with ULA since the company’s inception in 2006. Woolley was a walking encyclopedia of spaceflight knowledge and was incredibly passionate about sharing that story. He was always willing to take the time to explain complex concepts in a manner that anyone could understand. Soft spoken, with a sharp wit, Woolley loved the Delta IV, it is appropriate therefore that his named graced the side of one of these powerful launch vehicles as it made its way out of the Earth’s atmosphere.

Woolley was commissioned as an officer in the United States Air Force in 1974 where he served for almost a quarter of a century, retiring from the Air Force as a Lieutenant Colonel in 1998. Woolley then entered a new phase of his life, working for Boeing on the company’s Delta IV program and then with ULA.

The following is the official statement announced by United Launch Alliance prior to the flight of ULA Delta 368, the official name of the booster with Woolley’s name on it:

Following a nearly 24-year distinguished career in the Air Force, Mike retired as a Lt. Colonel and began a new career with The Boeing Company in 1998 working on the Delta IV program.

While at Boeing, Mike was very involved with the refurbishment of Space Launch Complex 37 at the Cape in preparation for the inaugural launch of the first Delta IV rocket.

Once ULA was formed in 2006, Mike joined the communication’s team and was best know for leading tours and sharing his immense knowledge and love of the space program and the history of the Cape.

Mike was also extremely active in the community and would often be seen leading the ULA charge at United Way, Veteran and Special Olympics events.

Mike was a consummate professional, as well as a kind and considerate person. His legacy will continue with each new tour group that hears the official “Woolley Tour” script and leaves more educated and enthusiastic about the great work that ULA is a part of.

His memory will remain and is greatly missed.

Editor’s note: I first met Mike during an exclusive tour of Cape Canaveral Air Force Station’s Space Launch Complex 37 and other facilities out at the Cape in 2011. There was no question that he did not have information on, he was flexible and willing to take the time needed so that we got what we needed.

Some months later, I was working to have a camera placed on the Vertical Integration Facility. Mike was ill at that time – but he still made the time to help us accomplished what we were trying to do. That is how I will remember him. Professional, kind and generous. Godspeed Mike.

Mike Woolley was a good guy and a great boss who I worked for in the mid-90’s. Lt. Colonel Woolley never demanded excellence from his team though he certainly inspired it. He mentored and encouraged my writing skills working for him as a contractor in national defense. I will always remember Mike as a great leader in my life.

What a huge honor for Mike and his family and friends to have Mike’s name on the Delta IV rocket. The launch was beautiful!