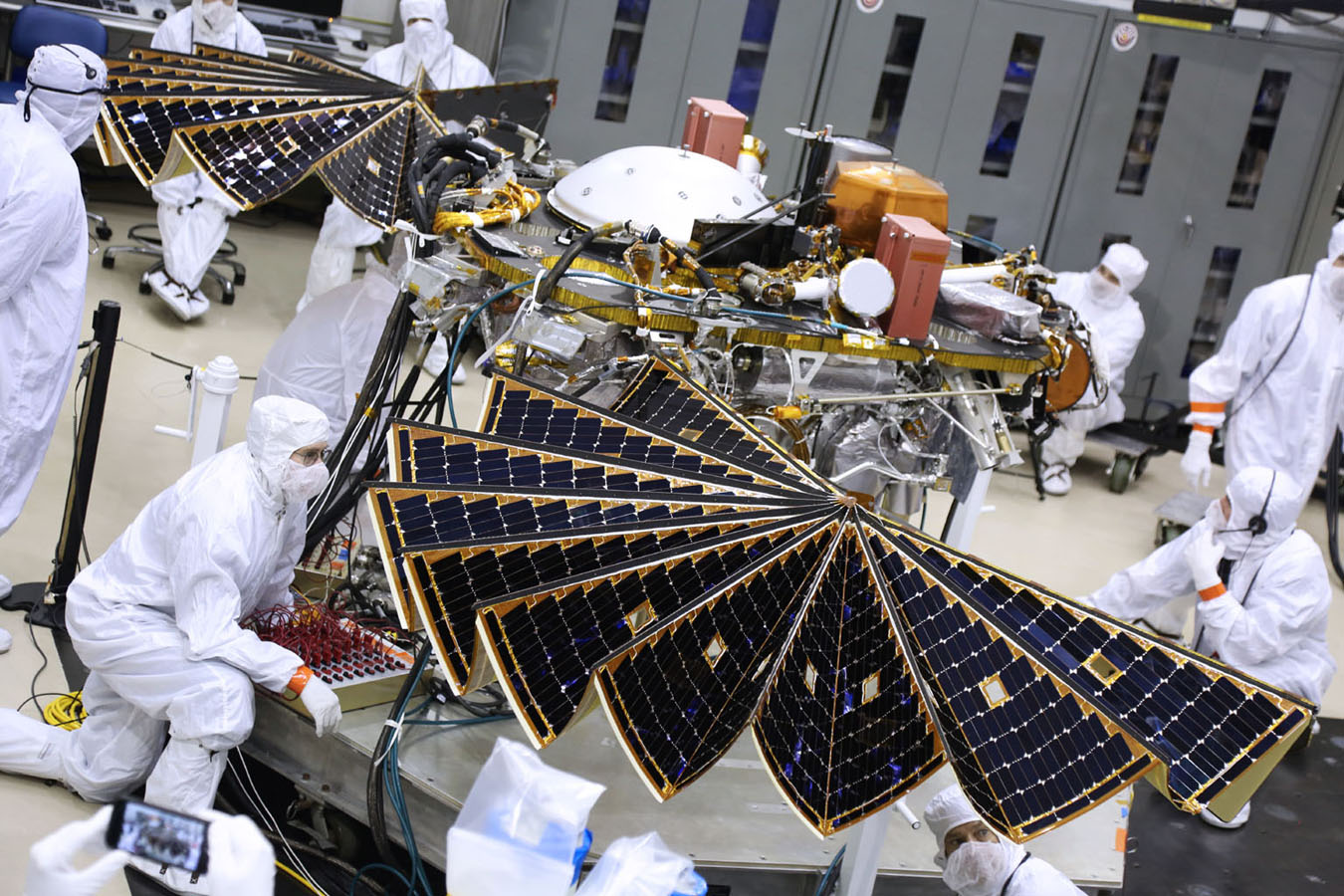 The solar arrays on NASA’s InSight Mars lander were deployed as part of testing conducted Jan. 23, 2018, at Lockheed Martin Space in Littleton, Colorado. Engineers and technicians evaluated the solar arrays and performed an illumination test to confirm that the solar cells were collecting power. The launch window for InSight opens May 5, 2018. Image Credit: Lockheed Martin Space

InSight, which is an acronym for Interior Exploration using Seismic Investigations, Geodesy, and Heat Transport, will study Mars’ deep interior, including its core, mantle, and crust, over a period of one Martian year, which equals nearly two Earth years.

The spacecraft’s launch window begins on May 5, 2018, and runs through June 8. On November 26, InSight is slated to land on Mars in the Elysium Planitia region, the planet’s second largest volcanic region, which straddles the planet’s equator.

Because Mars is quite far from the Sun and has a thin, dusty atmosphere, InSight’s solar panels are large and fan-shaped. They are expected to power the lander for a minimum of one Martian year.

All testing of the lander and its instruments are being conducted at Lockheed Martin, where the spacecraft was constructed. The solar panels passed their test by successfully collecting power when unfurled.

Bruce Banerdt of NASA’s Joint Propulsion Laboratory (JPL), mission principal investigator, describes InSight’s study as “Mars’ first health checkup in more than 4.5 billion years. We’ll study its pulse by ‘listening’ for Marsquakes with a seismometer. We’ll take its temperature with a heat probe. And we’ll check its reflexes with a radio experiment.”

A microchip containing 1.6 million names submitted by individuals was attached to the lander, joining another chip put in place two years ago that holds 827,000 submitted names.

JPL’s Microdevices Laboratory, which has added similar chips with names and images on other spacecraft, including the agency’s Mars Exploration Rovers Spirit, Opportunity, and the Mars Science Laboratory rover Curiosity, put the names on the tiny chips, which have widths of just 400 nanometers.

“This is the last time we will see the spacecraft in landed configuration before it arrives at the Red Planet,” said Lockheed Martin InSight Assembly, Test, and Launch Operations (ATLO) Manager Scott Daniels. “There are still many steps we have to take before launch, but this is a critical milestone before shipping to Vandenberg Air Force Base in California.” 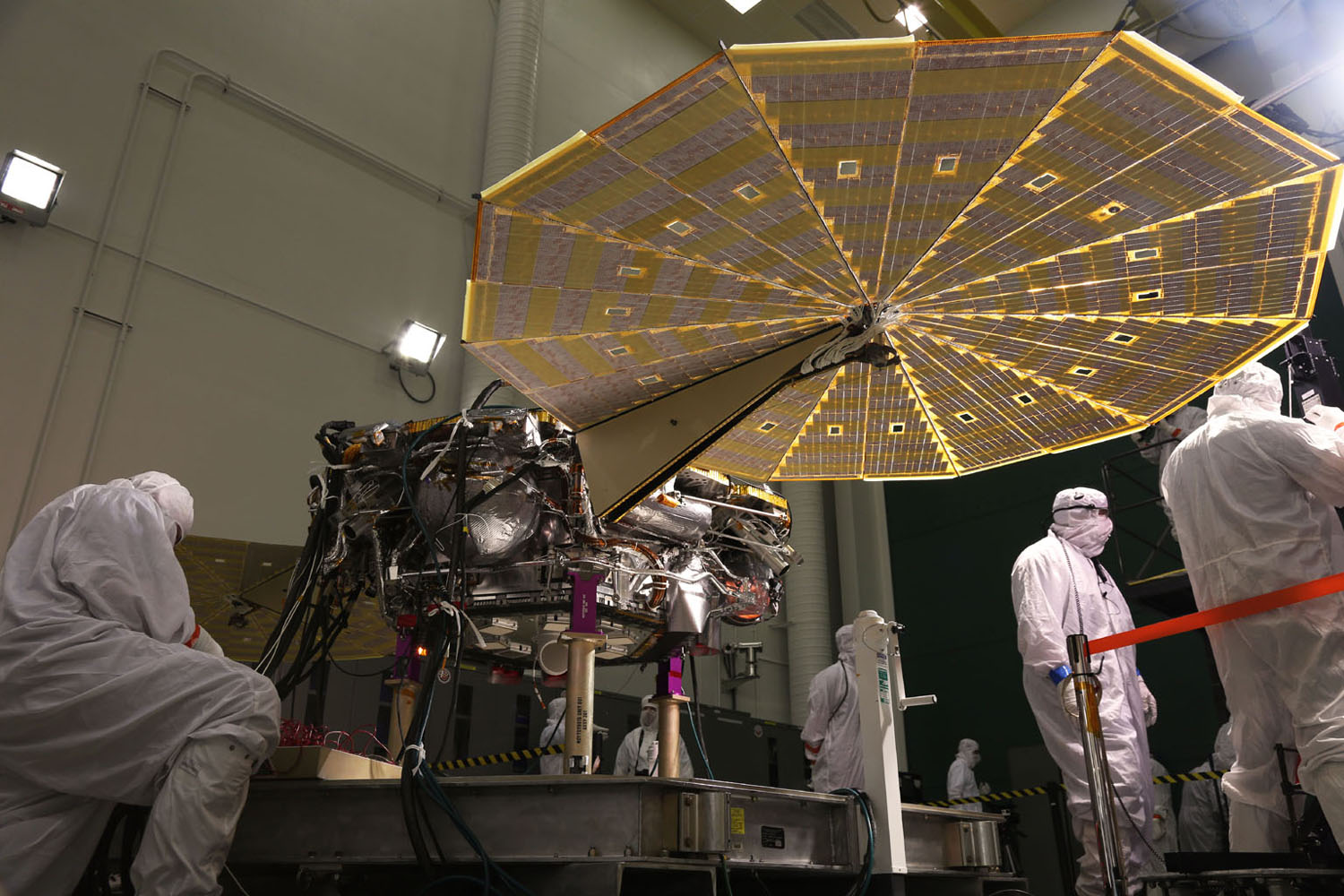 The solar arrays on NASA’s InSight Mars lander were deployed as part of testing conducted Jan. 23, 2018, at Lockheed Martin Space in Littleton, Colorado. Engineers and technicians evaluated the solar arrays and performed an illumination test to confirm that the solar cells were collecting power. The launch window for InSight opens May 5, 2018. Image Credit: Lockheed Martin Space