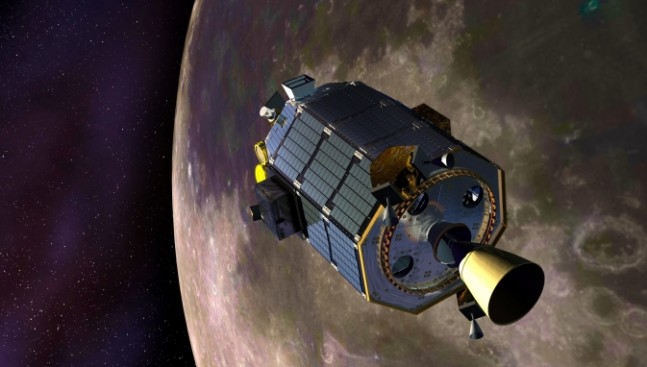 NASA's LADEE mission will end with an impact on the surface of the Moon on April 21, 2014. Image Credit: NASA

NASA’s team of engineers working on the Lunar Atmosphere and Dust Environment Explorer (LADEE) spacecraft. On Thursday, April 3, LADEE team members, Rick Elphic, the mission’s project scientist at NASA’s Ames Research Center, Butler Hine, LADEE’s project manager at Ames and Joan Salute, LADEE program executive detailed how LADEE will fly through the total lunar eclipse which will take place on April 15 and then a week later – will impact the surface of the Moon on April 21.

Prior to the April 15 eclipse, on April 11, mission managers will direct LADEE to conduct its final orbital maintenance maneuver. This last command will be made at this time to ensure that the spacecraft does not impact the Earth-facing side of the Moon and therefore poses no risk of potentially striking the historic Apollo landing sites. LADEE might however hit a mountain on its way in.

“There’s actually a possibly that LADEE could clip a peak,” Hines said. “There’s a natural uncertainty when predicting what a spacecraft might do when you are on Earth and it’s above the lunar surface. There is a chance that would could clip a mountain accidentally.”

LADEE has served the space agency well since lifting off from Wallops Flight Facility on September 6 of last year. The spacecraft launched atop an Orbital Sciences Corporation’s Minotaur V rocket and was originally lasted to last just 100 days. With the spacecraft lasting far longer than originally anticipated – its missions were extended, providing a wealth of data about our nearest celestial neighbor. LADEE should impact the far side of the Moon on April 21. Photo Credit: John Studwell / SpaceFlight Insider

“The prime mission is in the bag – we wouldn’t have authorized these low-altitude, high-risk attempts if all the requirements hadn’t already been met,” Salute said. “We consciously decided it was worthwhile to take the risk and do what was needed to get that science.”

For its part, NASA realizes that there is a lot of interest in not only launches – but landings. Even the type of landings that cause the robotic explorer to be vaporized. Therefore, NASA has started the: “Take the Plunge Challenge.” In this contest the public is encouraged to guess the precise moment in which LADEE will impact the lunar surface. Interested? Click Here: Take the Plunge

LADEE was actually launched to answer a question that had been raised because of what Apollo astronauts saw above the surface of the Moon. Crews saw a pre-sunrise glow detected above the lunar horizon. It was unknown what was causing this effect, but it as suspected that lunar dust which had become electrically charged by sunlight was the culprit behind the phenomenon.

Even with its death at hand, the spacecraft will continue to conduct science until almost the very end. Controllers at Ames will direct the spacecraft to fly at an altitude of about 1 to 2 miles (2 to 3 kilometers) above the surface of the Moon to to gather measurements at the lowest possible altitude. Eventually it will be unable to resist the Moon’s pull and will slam into the lunar regolith. Engineers have worked it that, even if LADEE becomes non-functional – it will still impact the Moon at the appointed time.

It is hoped that by studying the virtually non-existent lunar atmosphere, that a greater understanding of other rocky planets of a similar size can be obtained.

“It’s always bittersweet saying goodbye. The mission was such a resounding success that everyone on the team is incredibly proud of the performance of the spacecraft and the team members and all – it represents six year of hard work by a lot of people,” Hines said. “You’re both very proud of the success – but you’re also a little melancholy that you won’t be talking to your spacecraft again.”