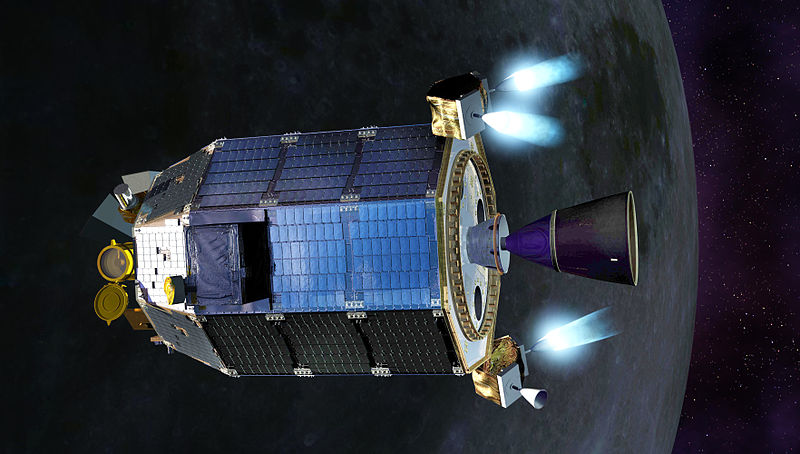 NASA's LADEE spacecraft was part of an experiment which served to validate a new method of data transfer across the void of space. Image Credit: NASA / GSFC

NASA has achieved a historical milestone in terms of transmitting data across the gulf of space. Using the Lunar Laser Communication Demonstration (LLCD), the space agency has sent a pulsed stream of data via a laser to the Moon. The rate which made history? Some 622 megabits per second (Mbps) was sent across the 239,000 miles that separate us from our nearest celestial neighbor. This effort involved NASA’s Lunar Atmosphere and Dust Environment Explorer or “LADEE.”

LLCD represents NASA’s first system revolving around a laser-based system as opposed to radio waves. NASA was also pleased to note an error-free data upload of 20 Mbps transmitted from New Mexico, to the LADEE spacecraft.

“LLCD is the first step on our roadmap toward building the next generation of space communication capability,” said Badri Younes, NASA’s deputy associate administrator for space communications and navigation (SCaN) in Washington. “We are encouraged by the results of the demonstration to this point, and we are confident we are on the right path to introduce this new capability into operational service soon.” LADEE launched toward the Moon in September. If all goes according to plan the spacecraft will spend about 100 days exploring phenomenon involving dust and the lunar atmosphere. Photo Credit: Jon Hanson

Since NASA’s very first steps into the cosmic void that is space, NASA has relied on radio frequency communication or “RF.” With the data requirements of current space-going vessels – RF is reaching the limits of what it can provide. NASA hopes that with the development of laser-based communications systems will provide the agency with the ability to transmit Hi-Definition and 3D video transmissions far more reliably.

“The goal of LLCD is to validate and build confidence in this technology so that future missions will consider using it,” said Don Cornwell, LLCD manager at NASA’s Goddard Space Flight Center in Greenbelt, Md. “This unique ability developed by the Massachusetts Institute of Technology’s Lincoln Laboratory has incredible application possibilities.”

LLCD is an experiment, one which NASA hopes will serve as a pathfinder for a long-term system, the Laser Communications Relay Demonstration (LCRD). LCRD is one of NASA’s efforts under the Technology Demonstration Missions Program. It is planned to use interwoven systems which is slated to be launched in 2017.

The LLCD is on LADEE which launch from NASA’s Wallops Flight Facility last month (Sept. 2013) on a mission to determine whether lunar dust caused the glow that Apollo astronauts saw on the lunar horizon in the late 60s and early 70s. LADEE has a planned 100-day mission that is controlled from NASA’s Ames Research Facility in California. Engineers at Ames designed, developed and built LADEE.