Kepler data suggests the galaxy is teeming with Earthlike planets 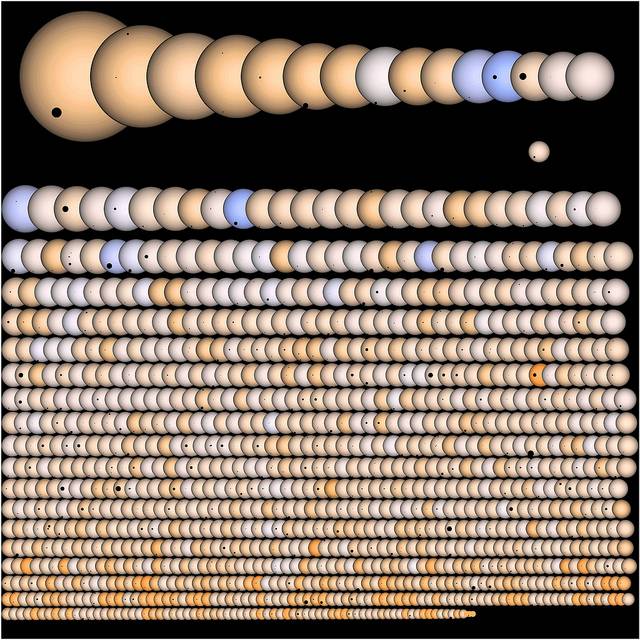 NASA’s planet-hunting Kepler Space Telescope may be dead but the observations it amassed over four years are continuing to revolutionize astronomy. The latest astounding results are being unveiled at the second Kepler Science Conference, being held at Ames Research Center in Moffett Field, Calif., November 4-8. They include the prediction that the galaxy in which we live may be home to around 2 billion Earth-like planets and that the nearest one may be  mere 12 light-years away.

Also announced at the conference: the discovery of 833 new candidate planets, ten of which are less than twice the size of Earth and that orbit within their star’s habitable zone — the region in which surface temperatures of an Earth-sized world might enable liquid water to exist for long periods on the surface. Already more than 1,000 exoplanets have been confirmed; this new tally brings to 3,538 the number of possible exoworlds uncovered by Kepler.

Analysis of the spacecraft’s findings so far suggest that almost all the stars in the Milky Way Galaxy, numbering several hundred billion, have at least one planet circling around them. From this follows the conclusion that the majority of stars that we can see in the night sky with our unaided eyes have systems of planets. Of great interest, not only to scientists but to the public at large, is whether any of these unexplored worlds are capable of supporting life.

Astrobiologists are well aware that life throughout the universe could take many forms, some wildly different from the terrestrial variety. It might, for instance, have a different biochemical basis, using silicon say instead of carbon, or having some substitute for DNA. But the kind of life we can most easily search for is the kind we know, so interest is especially focused at present on identifying Earth-like planets in the habitable zones of Sun-like stars. On this front the news could hardly be more encouraging. Jason Rowe, a researcher at the SETI Institute in Mountain View, Calif., has calculated that the biggest recent growth in Kepler candidate planets — an increase of 78 percent — has come in the category of Earth-sized planets. Rowe’s analysis confirms what many astronomers had expected: that as exoplanet observations are carried out over longer and longer periods using techniques and instruments of increasing sensitivity, the trend will be to find a larger and larger percentage of small (rocky) planets around their host stars.

A separate analysis of Kepler’s amassed data, conducted by a research group led by Erik Petigura, at the University of California, Berkeley, indicates that one in five stars similar to the Sun is accompanied by at least one planet no more than twice as massive as the  Earth, orbiting in the star’s habitable zone.

Although Kepler’s mission is now over, following the failure of a reaction wheel which was crucial to its pointing accuracy, it has brilliantly achieved what  it was launched to do: establish the percentage of stars like the Sun that have in orbit around them planets of roughly the same size and surface temperature as the Earth. What’s more, a year’s-worth of data, involving measurements of the tiny fluctuations in apparent brightness of more than 150,000 stars in a patch of sky in the constellation of Cygnus, contains secrets that have still to be revealed.