Juno set to soar past Earth on its way to Jupiter 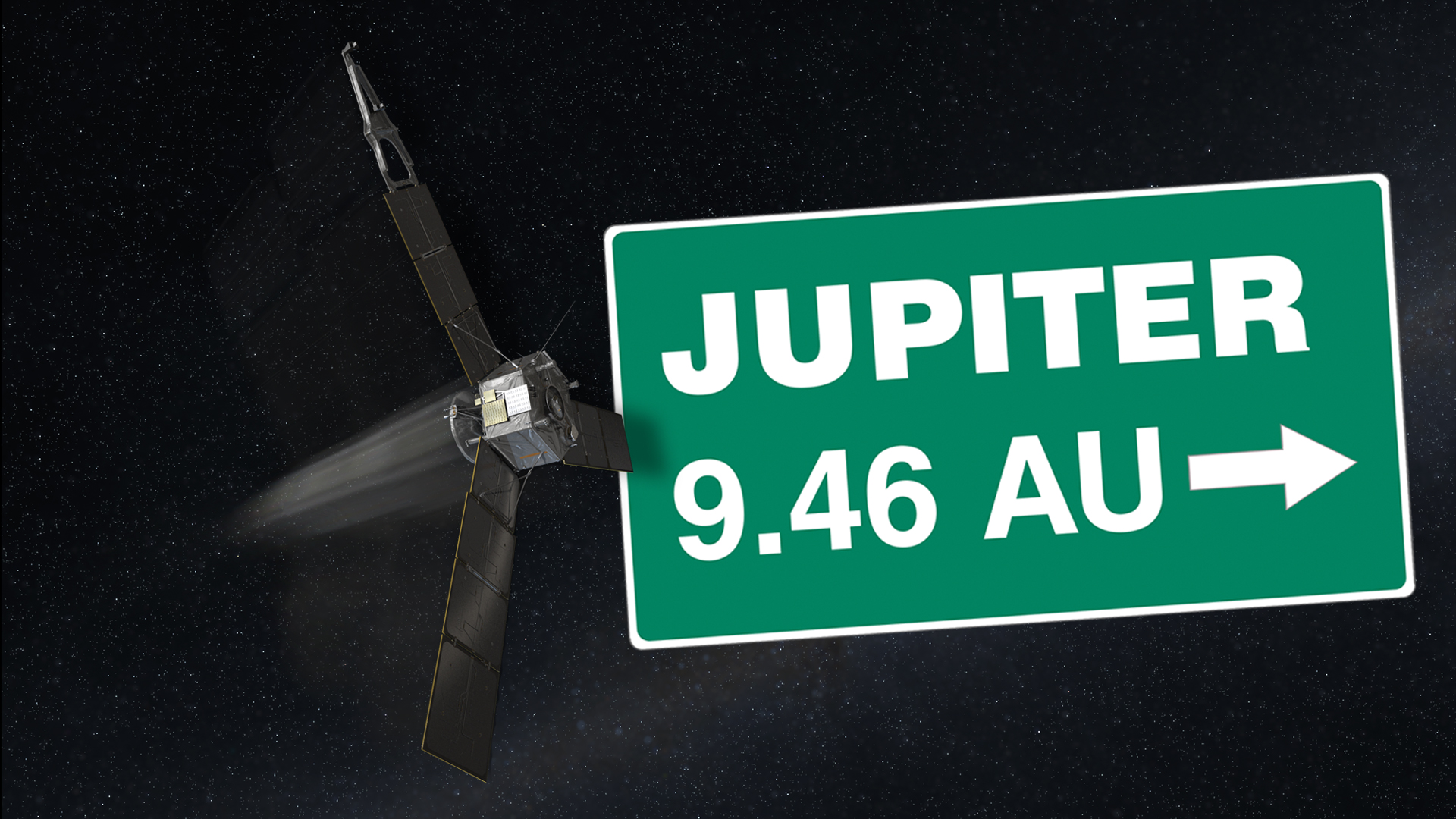 NASA's Juno spacecraft is poised to conduct a flyby of Earth tomorrow on its way to the gas giant Jupiter. Image Credit: NASA

The Earth will encounter a close pass tomorrow, Oct. 9, 2013, not from an asteroid or from a comet, but rather from the Juno spacecraft on its way to the gas giant Jupiter. Closest approach is estimated at being about 350 miles above the coast of South Africa at 3:21 p.m. EDT (12:21 PDT / 19:21 UTC). This pass will give the spacecraft a gravitational assist which will put it well on the road toward the king of the planets.

For the lead scientist on this mission, this is a crucial step in getting Juno to its destination.

“Juno is a large, massive spacecraft,” said Dr. Scott Bolton with the Southwest Research Institute. “The spacecraft has three large solar panels, measuring 9- by 29-feet, and a titanium vault to protect sensitive electronics from the harsh environment around Jupiter. “Even a large rocket couldn’t provide enough propulsion to get us all the way to Jupiter, so we are flying by the Earth for a gravity-assist that will provide about 70 percent of the initial boost provided by the Atlas V 551 rocket. The gravity assist essentially provides as much propulsion as a second rocket launch.” Juno was launched over two years ago, but it still has three years before it will reach its destination. Photo Credit: Jason Rhian / The SpaceFlight Group

Bolton is what is known as the mission’s “PI” or Principal Investigator. As with many initiatives of this type – Juno is an collective effort – with elements being provided by a number of organizations from as far away as Italy. It is hoped Juno will provide crucial information about how Jupiter was formed, thus shedding light on the formation of our solar system as well.

Jupiter is, by far, the largest planet in the solar system, owning some 2.5 times the mass of all the other planets combined. During the early days of our solar system, Jupiter gobbled up much of the mass leftover from the formation of our neck of the cosmic neighborhood.

“While we are primarily using Earth as a means to get us to Jupiter, the flight team is also going to check and calibrate Juno’s science instruments,” said Bolton. “As another bonus, Juno is approaching the Earth from deep space, from the sunlit side. Juno will take never-before-seen images of the Earth-Moon system, giving us a chance to see what we look like from Mars or Jupiter. We plan to release a movie of this unique perspective of the Earth-Moon system shortly after the flyby.” Juno utilized the 551 configuration of United Launch Alliance’s Atlas V. Despite the enormous thrust imparted to the spacecraft, Juno only had enough energy to reach the asteroid belt – before being pulled inexorably back toward the inner solar system. Photo Credit: Jason Rhian / The SpaceFlight Group

The Atlas V used was the 551 configuration, the most powerful iteration of the Atlas launch vehicle. However, it only had enough power to send Juno to the asteroid belt – before the powerful tug of our Sun pulled the spacecraft back toward the inner solar system. Tomorrow’s flyby – will provide Juno with an increase in speed relative to the Sun. This extra push will accelerate the spacecraft from 78,000 miles (126,000 kilometers) per hour to 87,000 miles (140,000 kilometers) per hour. Juno were aided on its journey by the Atlas’ Centaur upper stage. Image Credit: NASA

Upon reaching Jupiter, Juno will begin circling the gaseous world from pole to pole. The research team back on Earth will use the spacecraft’s nine scientific instruments to peer beneath the clouds that hide the world’s interior from view. It is hoped that these studies will give scientists a better understanding of Jupiter’s origins with an emphasis on the planet’s structure, its atmosphere and magnetosphere.

Juno is named after the mythological wife of the Roman god Jupiter. She had magical powers which enabled her to discover her spouse’s activities despite his best efforts to conceal them. Much like its namesake, the spacecraft will use its suite of instruments to reveal the secrets of the planet Jupiter.