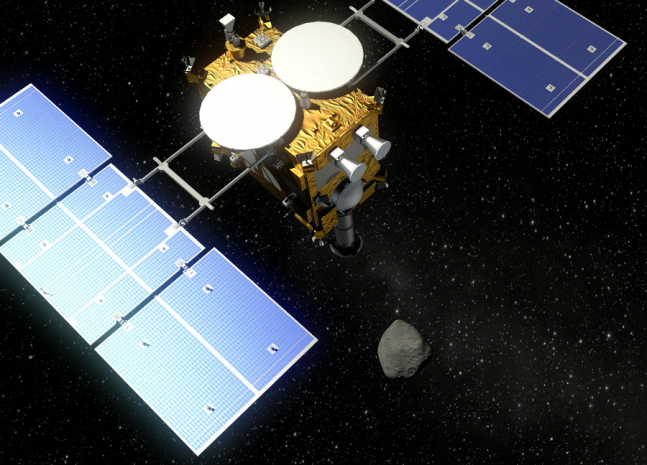 The Japanese Aerospace Exploration Agency (JAXA ) has decided that the flight of their Hayabusa 2 spacecraft will have to wait a little longer before taking to the skies. JAXA had planned to launch the spacecraft atop the H-IIA Launch Vehicle No. 26 on Nov. 30 at 1:23 p.m. (Japan Standard Time) from Tanegashima Space Center in Japan. The cause for the delay was something spaceflight watchers across the globe – are well familiar with.

Clouds, that included a freezing layer which violated launch guidelines for the H-IIA booster, were detected, forcing mission planners to hold off conducting the flight. Weather conditions will be re-evaluated and the mission is now scheduled to take place no-earlier-than Dec. 1 (although this date appears to be tentative at best). The Hayabusa 2 spacecraft is an asteroid hunter and its target is (162173) 1999 JU3. If everything goes according to plan, the probe should arrive at the Apollo asteroid in July of 2018. It will then spend a year-and-a-half surveying this leftover fragment of the solar system’s formation before departing in Dec. 2019 – with a planned return to Earth set for Dec. 2020.

Like the first Hayabusa mission as well as NASA’s Dawn spacecraft, Hayabusa 2 utilizes a relatively new technology, an ion drive. To allow the probe to travel to (162173) 1999 JU3, depart the asteroid and then return to Earth – it will employ not one – but two of these engines. Compared to its predecessor, Hayabusa 2 has enhanced navigation and guidance technology, new antennas, attitude control systems and more.

Hayabusa 2 weighs about 1,300 lbs (590 kg) and was constructed by NEC Corp. based out of Tokyo. In addition to the other high-tech devices on board, the craft will use a Ka-band communication system and an intermediate infrared camera.

“…asteroids are believed to have remained the same since the early stages of the solar system. There is even the theory that asteroids brought the materials necessary for the development of life to Earth,” said Hitoshi Kuninaka, Hayabusa 2’s project manager. “When it returns to Earth with samples, the data will help scientists examine this area of research closely – taking scientific knowledge to a higher level.”

When it reaches its destination, the craft will conduct similar operations as the first Hayabusa craft – with one notable exception. Hayabusa 2 comes equipped with an explosive device. It will use it to liberate a sample of the asteroid – for return to Earth (Hayabusa only collected small grains from the Itokawa asteroid).

Japan’s Space Activities Commission approved the flight of Hayabusa 2 in 2006 with the mission being announced by JAXA President Keji Tachikawa shortly thereafter. The cost of the mission cost an estimated $16.4 billion yen.

The launch vehicle for this mission, the H-IIA booster, is produced by Mitsubishi Heavy Industries (MHI).

The H-IIA is a liquid-fueled rocket that has been tapped for an array of missions. Lunar probes, expeditions to Venus and geostationary satellites – have all gotten their start atop the H-IIA.

The booster first launched in 2001 and has taken flight 24 times in the intervening years. The rocket is derived from the H-II booster, with modifications designed to increase the launch vehicle’s reliability and to lower costs to ferry payloads to orbit. To date, the booster has a success rate similar to that of United Launch Alliance’s Atlas V (the H-IIA has a success rate of 95 percent and the Atlas V 96.4).