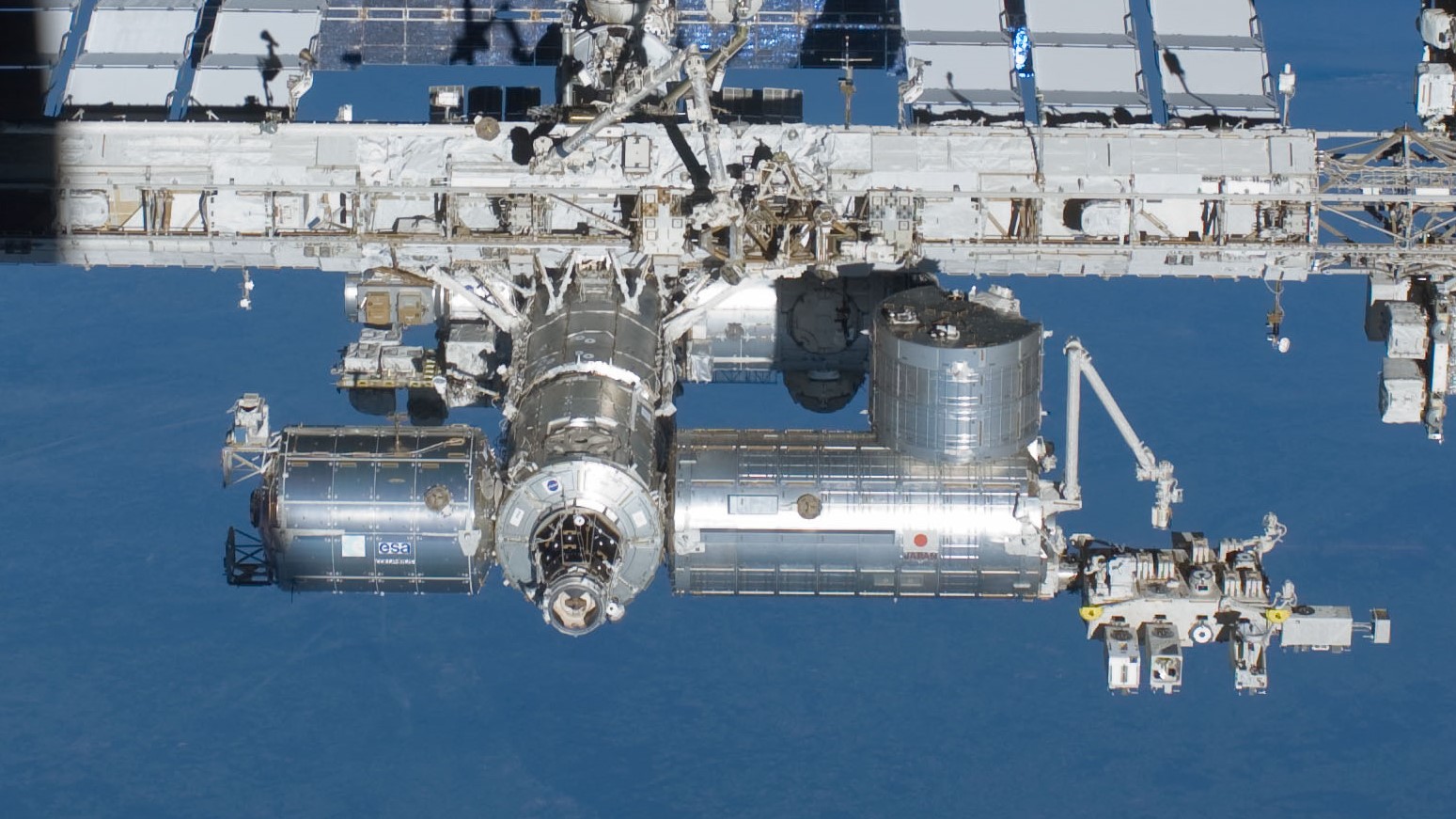 The European Space Agency’s Columbus module, lower left, has been in space for more than 10 years and has sustained “hundreds” of debris impacts. Photo Credit: NASA

Each International Space Station module is designed with micrometeoroid debris protection. A recent survey of the European Space Agency’s Columbus module shows the importance of that shielding.

According to a January 2019 news release from ESA, a survey performed Sept. 6, 2018, using the station’s 57.7-foot (17.6-meter) robotic Canadarm2 showed “hundreds of impacts” across the surface of the Columbus module.

A time lapse of the Canadarm2 robotic arm performing a survey of Columbus. Photo Credit: ESA/NASA

“Space is vast and mostly empty, but small space rocks are constantly passing into our local environment as well as debris from past spacecraft collisions and explosions,” Detlef Koschny, an expert from ESA’s Planetary Defence Office, said in a news release.

Koschny and a team of scientists from ESA’s Planetary Defence office requested the survey.

Columbus was launched to the ISS inside the payload bay of Space Shuttle Atlantis during mission STS-122 in February 2008. Once at the outpost, it was attached to the starboard side of the Harmony module.

According to ESA, the module had not been checked for impact damage in the more than 10 years it has been in orbit.

When engineers performed an analysis of the data returned from the survey, they found “several hundred impact craters,” but these were each very small in size, produced by debris that was typically smaller than four-hundredths of an inch (about 1 millimeter). 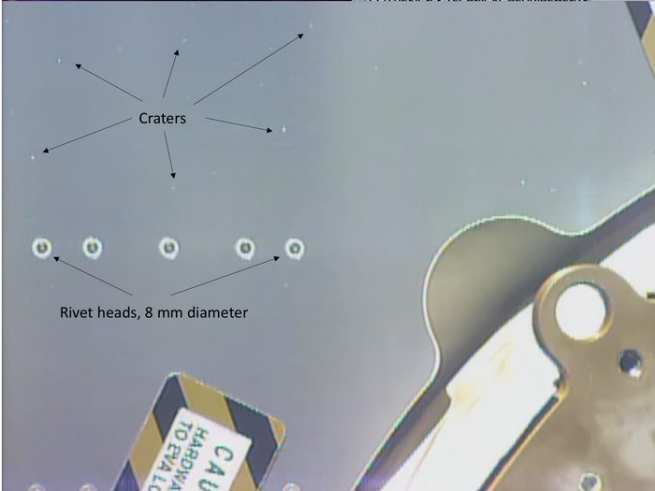 A size comparison of the impacts compared to rivet heads on the Columbus module. Photo Credit: ESA/NASA

“These fragments can travel at extremely fast speeds, and if larger than a centimeter in size could do a great deal of damage to the Space Station and satellites in orbit”, Koschny said. “These little dents in the outer part of the Columbus module show how the space around Earth is not so empty after all.”

Koschny said this shows how well the Columbus module is doing to protect astronauts living and working on the space station.

Each space station pressurized module has debris shielding. The most vulnerable parts are those facing the outpost’s direction of travel, including the Columbus module, the Japanese Kibo module and the forward face of the Harmony module and its docking adapters.

While there are over 100 types of shielding across the multiple sections of the ISS, the most typical is called a “Whipple bumper,” which consists of multiple layers designed to break apart the colliding object in order to spread its collision energy across several much smaller pieces so that lower layers can more easily withstand the impact.

It’s a lightweight shield solution. But, like most things in spaceflight, it comes with a trade off—a larger volume as each layer typically has space between them. 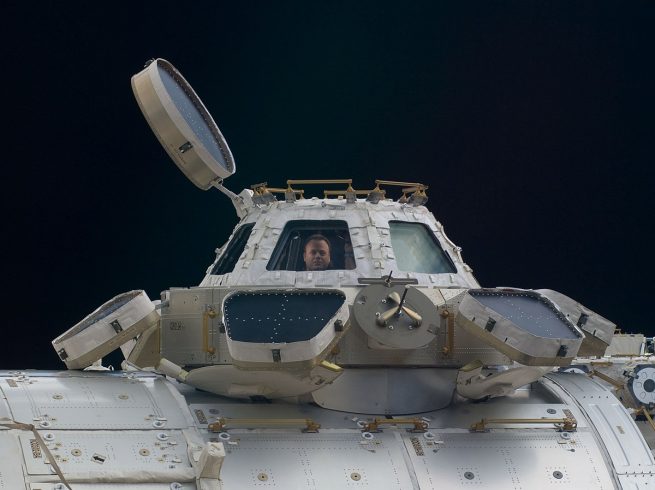 NASA astronaut Ron Garan looks out of a window on the Cupola module during Expedition 28 in 2011. Photo Credit: NASA

Regardless, the survey seems to show the shielding is doing its job. According to ESA, the study should allow for engineers and scientists to better understand the density of human-made debris in the orbital altitude of the ISS—roughly 250 miles (400 kilometers).

Researchers hope to compare this with those of natural micrometeorite density in the same region to better understand the risks of micrometeorites.

Several other areas of the space station have seen impacts, including the European-built Cupola, which was launched to the ISS in 2010.

The Cupola has seven massive windows, the largest of which is about 31 inches (80 centimeters) in diameter. Each are made of fused silica and borosilicate glass and come equipped with an independent shutter, which are closed when not in use.

In 2016, an extremely small piece of debris, likely no bigger than a few thousandths of a millimeter across, impacted one of the windows and produced a roughly three-tenth-inch (7-millimeter) diameter chip.

“I am often asked if the International Space Station is hit by space debris,” said ESA astronaut Tim Peake in a 2016 news release. “Yes—this is the chip in one of our Cupola windows, glad it is quadruple glazed!” 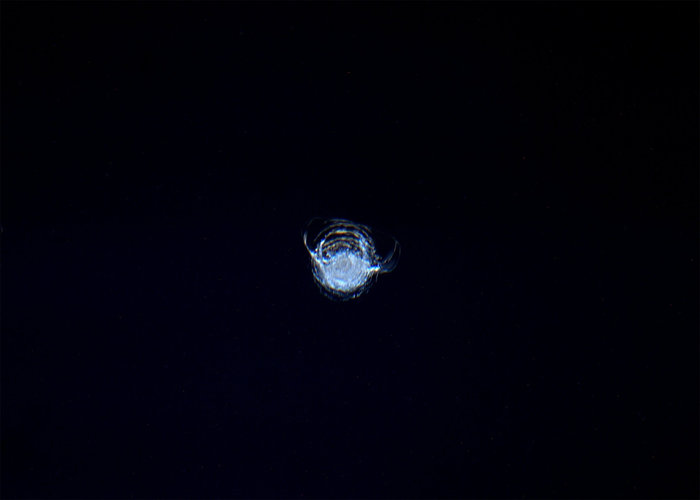 A tiny piece of debris in 2016 produced a roughly three-tenth-inch (7-millimeter) chip in a window on the station’s Cupola module. Photo Credit: ESA/NASA

As I’ve suggested nasa should recycle some of their trash into ingots to be placed inside specially designed containers to slighty protect against micrometeorites and solar radiation. Rather than some of the trash being burnt in re-entry. It could be bolted to the outside of the space station. Pieces inside the containers would most likely need to be glued together. If not used for the station, containers could be combined for other space projects such as to provide structural support for space telescopes or satelites. Organic waste could be stored in specially designed containers stored outside as well to be stored for night soil to be used to grow plants on future lunar, mars or asteroid bases. As of right now if trash thier is gone it’s gone. If it’s stored it could be used later for a future resource.