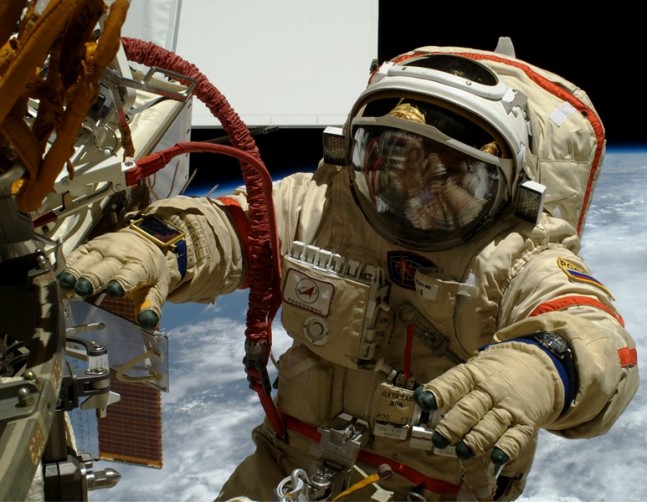 This morning at 10:02 a.m. EDT (1422 GMT) saw the start of a lengthy extra-vehicular activity or “EVA” for Russian cosmonauts Alexander Skvortsov and Oleg Artemyev aboard the International Space Station (ISS). The spacewalking duo set out to deploy a nanosatellite and install another scientific experiment package. Today’s successful extravehicular activity (EVA ) went on until 3:13 p.m. EDT (1913 GMT), wrapping up at about 5 hours and 11 minutes—completing a little sooner than was originally anticipated.

Earlier in the month, the two Expedition 40 spacewalkers had prepped their Russian Orlan spacesuits for today’s work, which began as they left the Pirs docking compartment to manually deploy the nanosatellite, Chasqui 1. The tiny CubeSat, measuring a mere 4 inches (10 centimeters) across the board and weighing in at just more than 2 pounds (1 kg), was deployed manually by cosmonaut Artemyev’s hands, as Skvortsov took pictures. The miniature Peruvian satellite is designed to provide imagery of the Earth to a ground station by the means of two onboard cameras — one which records in the infrared light spectrum and the other in the visible light spectrum. The National University of Engineering in Peru, whom is operating the tiny spacecraft, hopes to gain experience in satellite technology for use in communications and other purposes.

NBC News stated the following regarding today’s EVA: This isn’t the first time satellites have been sent into space from the International Space Station. Astronauts launched fleets of tiny cubesats from the Japanese module on the space station, and in 2006, two crewmembers launched “SuitSat” — a spacesuit repurposed into a satellite — during a spacewalk. Aside from sending Chasqui 1 into orbit, the veteran spacewalkers also installed another experiment package to the exterior of the Zvezda service module:

The spacewalkers installed the EXPOSE-R2 experiment package, a European Space Agency-sponsored suite of experiments, on the exterior of the Zvezda service module. The package includes two astrobiology studies that will investigate biomaterials and extremophiles – organisms that are tolerant of environmental extremes. Results from these experiments may contribute to life-detection strategies for future robotic exploration of Mars.

In addition to the installation of EXPOSE-R2, the two spacewalkers also retrieved several science packages today. From the Poisk Mini Research Module-2, they removed one cassette and installed another of an experiment called by its Russian acronym, SKK. Also removed, was a panel of sample materials from the Vinoslivost payload. Both experiments are designed to expose various materials to the harsh space environment for testing. An image of the Peruvian build CubeSat, Chasqui 1, which weas deployed during today’s spacewalk. Photo Credit: The National University of Engineering of Peru

The retrieval of a Biorisk experiment container outside Pirs completed the science package roundup for the two cosmonauts. Biorisk studies the effects of microbes on spacecraft structures.

A portion of today’s 5-hour spacewalk was allotted for miscellaneous maintenance too, including adding a handrail clamp holder for the Automatic Phased Array communications system antennas they had set up during their first spacewalk on June 19. In addition, the Plume Impingement and Deposit Monitoring unit was set up on the Poisk Mini Research Module-2 and residue samples were taken from one of the windows on Zvezda.

Today’s routine spacewalk was carried out without error, with both cosmonauts returned safely aboard the ISS – and more quickly than originally estimated.

Both Flight Engineers had arrived at the International Space Station on March 27 along with NASA astronaut Steve Swanson aboard a Russian Soyuz spacecraft. Today’s successful EVA marks the second for both Skvortsov and Artemyev, as well as the 181st spacewalk overall in support of space station assembly and maintenance.

For its part NASA, is planning spacewalks of its own. SpaceFlight Now reports that the U.S. space agency will conduct two EVAs. These will be carried out to move a pump that had failed from a storage position located on the station’s solar power truss. The other spacewalk will be conducted so as to replace a solar array electrical component.

NASA has been waiting for spacesuit batteries which are currently slated to arrive at the orbiting outpost on the SpX-4 mission, which is scheduled set to launch onboard a SpaceX Dragon cargo vessel on Sept. 19. If everything goes to plan, this means that NASA astronaut Reid Wiseman and European Space Agency astronaut Alexander Gerst might be able to carry out the spacewalk some time in early October.

Russia and its involvement on the ISS Program have come under scrutiny due to remarks made by Russian Deputy Prime Minister Dmitry Rogozin. Rogozin stated Russia would no longer participate in the ISS past 2020.