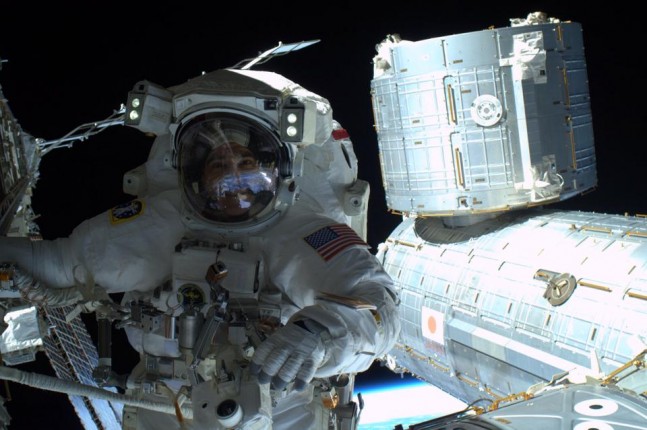 Rick Mastraccio made repairs to the exterior of the International Space Station with Steve Swanson at 9:56 am EDT. Photo Credit: NASA

Only three days after the International Space Station (ISS) received their supplies from SpaceX’s Dragon capsule on Easter, Expedition 39 astronauts hurried to replace a backup computer relay system today. Rick Mastracchio and Steve Swanson ventured outside to the space station’s truss at 9:56 a.m. EDT which marked the start of the spacewalk. “The computer, also called a multiplexer/demultiplexer (MDM), failed for unknown reasons a couple of weeks ago. While the primary computer is working perfectly and the crew is in no danger, things get more risky if the primary computer also breaks. That’s why NASA worked to get the spacewalkers outside as quickly as possible,” Universe Today reported.

Today’s spacewalk, dubbed U.S. EVA 26, was due to last only 2.5 hours, but the duo sped through their tasks, which supposedly involved only three bolts. “Swanson and Mastracchio installed a spare MDM that was housed inside the Destiny lab since April 2001 when it was delivered aboard space shuttle Endeavour. They removed the failed MDM from the S0 truss where it has been located since the truss was delivered with the MDM already inside in April 2002. The station houses 45 MDMs, 24 internally and 21 externally,” said a NASA release.

The excursion ended at 11:26 a.m. EDT, much earlier than expected. The computer that failed on April 11, was replaced quickly by a spare that resides in a compact 50-pound box and checked for any damage, stated the Huffington Post.

“The box, located near the center of the station and not far from the U.S. airlock, holds computer cards provided a backup capability to control several important systems outside the outpost, including coolant loops and joints that rotate solar array wings,” Florida Today said.

“The repair will ensure mission controllers don’t lose the ability to command those systems if the primary box were to fail, too.” NASA held off on conducting the spacewalk sooner to allow the launch of SpaceX’s Falcon 9 and Dragon, which were on call to deliver supplies to the space station under the Commercial Resupply Services contract. Even though NASA has suspended all non-urgent extra-vehicular excursions due to a life-threatening spacesuit water leak last summer, this spacewalk was considered urgent to the continued functionality of the station.

Both Expedition 39 astronauts are spacewalk veterans, with today’s extra-vehicular activity (EVA) marking the ninth for Mastracchio and the fifth for Swanson. Today’s EVA is also the 179th excursion to support assembly and maintenance aboard the space station.

The U.S. astronaut’s spacewalk wasn’t the only activity that was happening aboard the space station this morning, however, NASA reported.