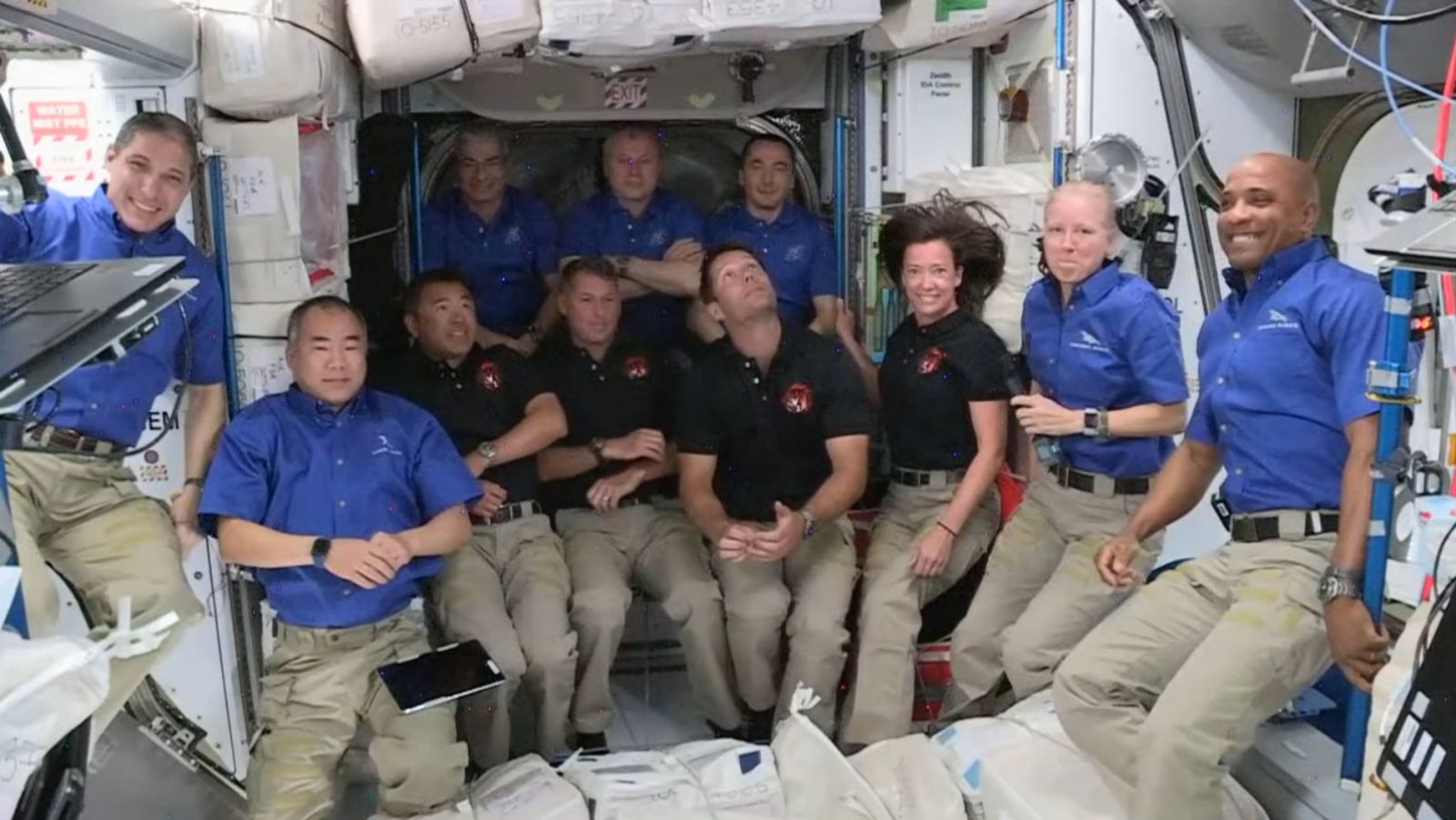 Less than 24 hours after launching from Florida, SpaceX’s Crew-2 Dragon arrived at the International Space Station, temporarily increasing the crew size aboard the outpost to 11.

Crew-2 Dragon with NASA astronauts Shane Kimbrough and Megan McArthur, Japan Aerospace Exploration Agency astronaut Akihiko Hoshide and European Space Agency astronaut Thomas Pesquet docked with the forward port of the Harmony module at 5:08 a.m. EDT (09:08 UTC) April 24, 2021. A couple hours later at 7:05 a.m. (11:05 UTC), the hatches between the two vehicles were opened and after about 35 minutes the astronauts joined the seven others already aboard the ISS. 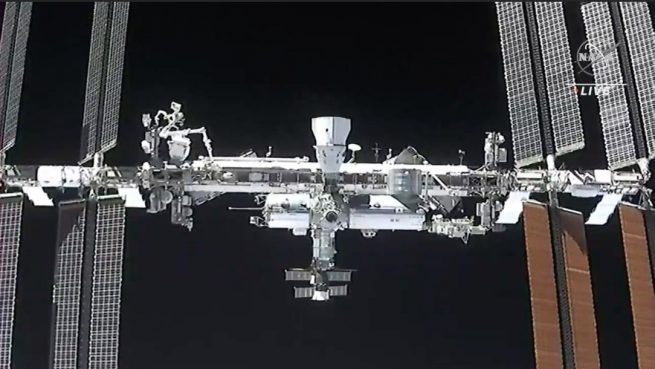 A view of the International Space Station from Crew-2 Dragon as it approached the outpost. The Crew-1 Dragon can be seen on the top center part of the ISS. Credit: NASA

“It’s taken a tremendous amount of work from a lot of different teams to get us here,” said McArthur during the welcome ceremony. “We of course have our excellent training team at Johnson Space Center. Also an outstanding training team from Hawthorne and the entire ISS program and Commercial Crew Program working together to get us here as well as along with our international partners. We’re just really excited to be here and be part of this historic mission with two Dragons on board. First reuse of a capsule. First reuse of a booster [for crewed missions]. It’s just a tremendous achievement on behalf of our partner SpaceX, so I want to congratulate and thank them.”

The other occupants of the ISS are Russian cosmonauts Oleg Novitsky and Pyotr Dobrov and NASA astronaut Mark Vande Hei — who launched to the outpost earlier this month in Soyuz MS-18 — and NASA astronauts Mike Hopkins, Victor Glover and Shannon Walker and JAXA astronaut Soichi Noguchi — who have been aboard the ISS since November 2020 after launching in the Crew-1 Dragon.

After the welcome ceremony, the Crew-2 astronauts will be given a safety briefing before beginning the process of making the space station their home for the next six months as the crew performs hundreds of science experiments in a multitude of areas of study. 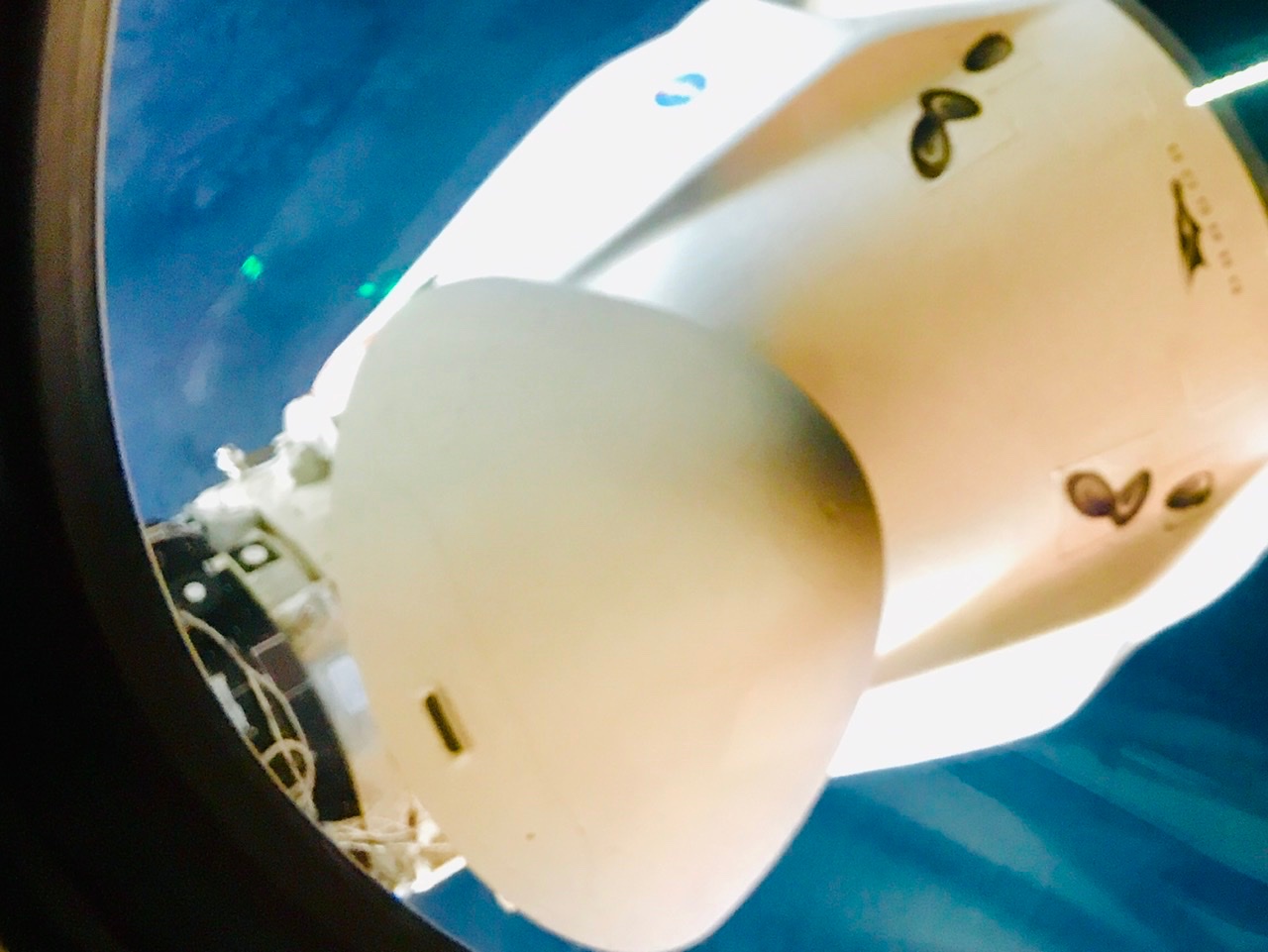 SpaceX’s Crew-2 Dragon moments after docking with the ISS. This image was captured by Japanese astronaut Soichi Noguchi aboard the Crew-1 Dragon, which is docked at a nearby port. Credit: Soichi Noguchi/JAXA

Additionally, the Crew-2 Dragon mission is using the same capsule that was used for the Demo-2 mission in the summer of 2020, Endeavour, which sent NASA astronauts Doug Hurley and Bob Behnken to the ISS for several months on the first crewed flight of a Dragon capsule. 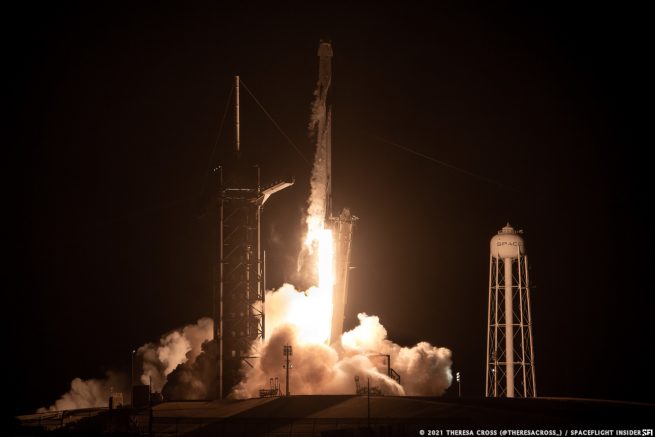 As such, McArther, who is married to Behnken, flew in the same seat as her spouse in the same vehicle.

Currently commanding the space station is Walker. However, early next week, she is expected to hand command of Expedition 65 to Hoshide in advance of her return with the rest of the Crew-1 astronauts.

Walker has been commanding the ISS since April 15, meaning when she hands control to Hoshide, she’ll have held that title for the shortest amount of time — less than two weeks.

As of right now, Crew-1 is slated to undock from the space-facining port of the Harmony module and return to Earth on April 28. Several hours after leaving the ISS, the capsule is expected to perform a parachute-assisted splashdown off the coast of Florida.

When Crew-1 leaves, the station’s population will be reduced to its normal count of seven. Over the coming weeks and months, Expedition 65 will see the departure of the NG-15 Cygnus spacecraft and the arrival of the CRS-22 Dragon spacecraft, which’ll bring new solar arrays for the outpost.

CRS-22 is scheduled to launch and arrive in June. Shortly after, several spacewalks will be performed, likely with at least one Crew-2 astronaut, to install these new arrays to the P6 truss.

The docking configuration at the International Space Station as of April 24, 2021. There are now six visiting vehicles attached to the orbiting laboratory. Credit: Derek Richardson/Orbital Velocity

Additionally, Expedition 65 is expected to see the first major module addition to the ISS since the end of its assembly era in 2011. In July Russia is set to launch the Nauka Multipurpose Laboratory Module from Kazakhstan. It’s essentially a copy of the Zarya module.

Before Nauka can be attached to the ISS, the 20-year-old Pirs module will have to be detached. That’ll be accomplished with the Progress MS-16 cargo spacecraft, which is currently docked to that module. Pirs itself is attached to the space-facing port of the Zvezda module. 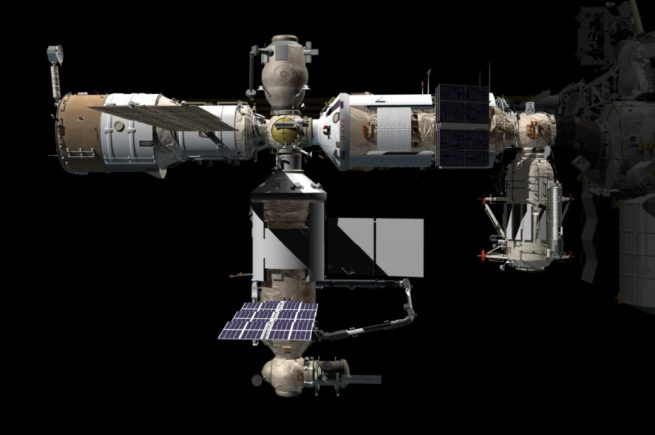 The Nauka Multipurpose Laboratory Module is slated to launch as early as July 2021. Credit: NASA

Once Pirs is removed, Nauka can autonomously dock to that location, where it is slated to remain for the duration of the lifetime of the ISS. Within the months following arrival, several Russian segment-based spacewalks are expected to be performed to finalize various external connections with the module and the rest of the outpost.

Also during Expedition 65’s watch is expected to be the second Orbital Flight Test of Boeing’s CST-100 Starliner.

This second uncrewed test flight of Starliner was initially expected in April. However, delays in reading the vehicle for launch as well as the packed ISS visiting vehicle schedule postponed that flight to no earlier than August.

Assuming the flight occurs then and is successful, Starliner’s Crew Flight Test is expected no earlier than the end of 2021 or early 2022.

Crew-2 is expected to remain at the ISS until late October. They’ll depart the orbiting laboratory about a week after the Crew-3 Dragon flies to the outpost with NASA astronaut Raja Chari and Thomas Marshburn as well as European Space Agency astronaut Matthias Maurer and a currently-unnamed second international astronaut.

Crew-3 Dragon’s launch date is currently penciled in for Oct. 23. However, that schedule is always subject to change.

Kind of like the video of Captain Archer and Trip Tucker approaching the NX01 Enterprise in a repair shuttle in the opening scene of the first Star Trek Enterprise episode “Broken Bow”.

The Crew2 didn’t even scratch the paint.