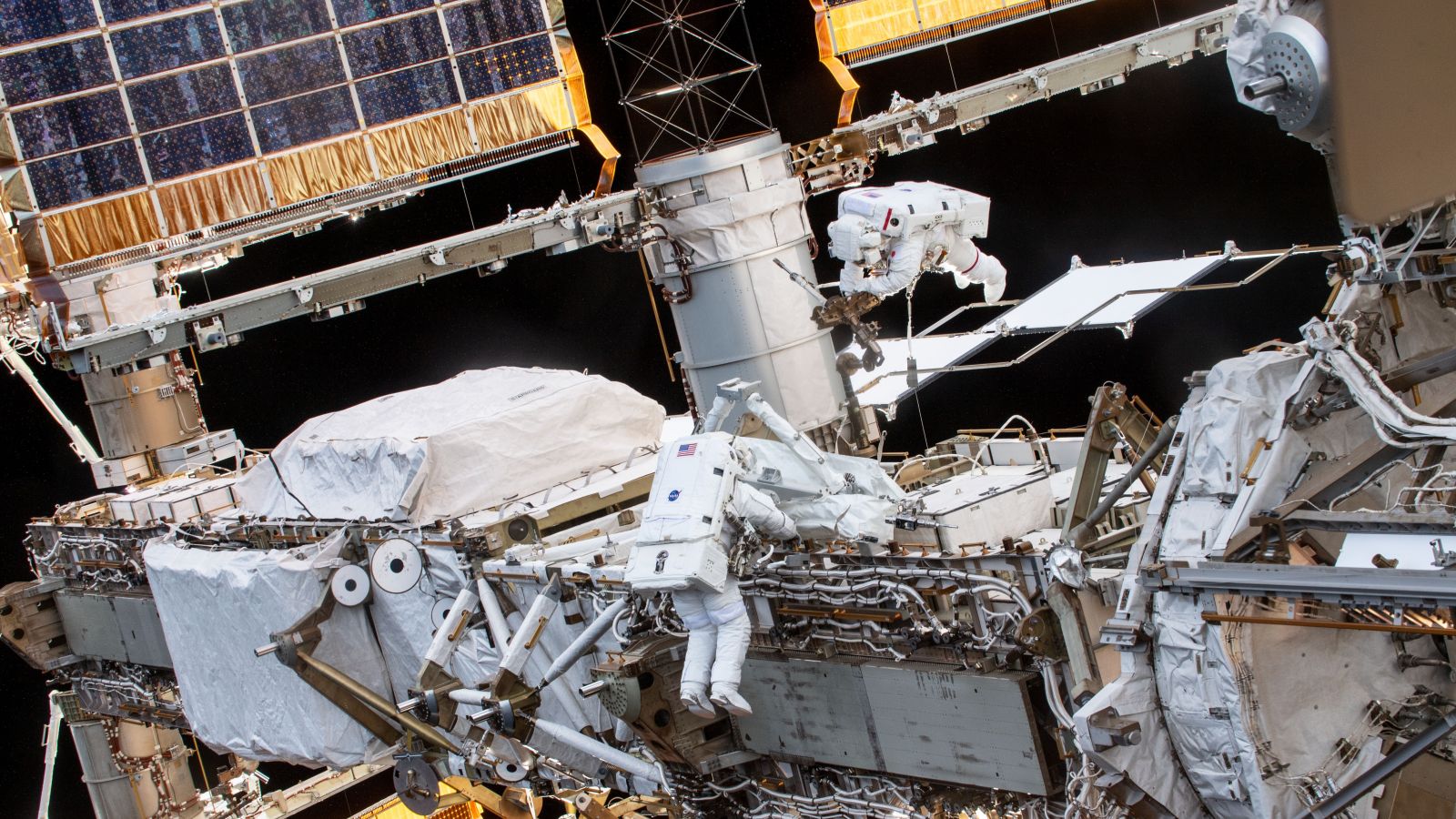 A photo of spacewalking astronauts installing a modification kit on the P4 truss for future solar arrays during a September 2021 outing. The spacewalk on March 15, 2022, is essentially a mirror image with a modification kit being installed on the S4 truss segment. Credit: NASA

Two NASA astronauts completed a spacewalk to prepare the International Space Station for a new set of solar arrays scheduled to arrive later this year.

On March 15, 2022, NASA astronauts Kayla Barron and Raja Chari, two ISS Expedition 66 flight engineers, performed U.S. EVA-79 — the second of the year for the ISS and the third for the seven-person Expedition 66 increment, which began in October 2021.

The purpose of this outing was to install a solar array modification kit on the 3A power channel’s mast canister, located on the S4 truss segment. S4 is located on the starboard side of the space station’s integrated truss assembly.

NASA said this spacewalk is essentially a mirror of the one that occurred in mid September 2021 on the P4 truss segment.

This was the fourth of six mod kits installed over the last couple years to allow for new roll-out solar arrays to be attached to the ISS.

Called iROSA, the first two were installed in June 2021. The next two are expected to be added later this year after being delivered by a SpaceX cargo Dragon. 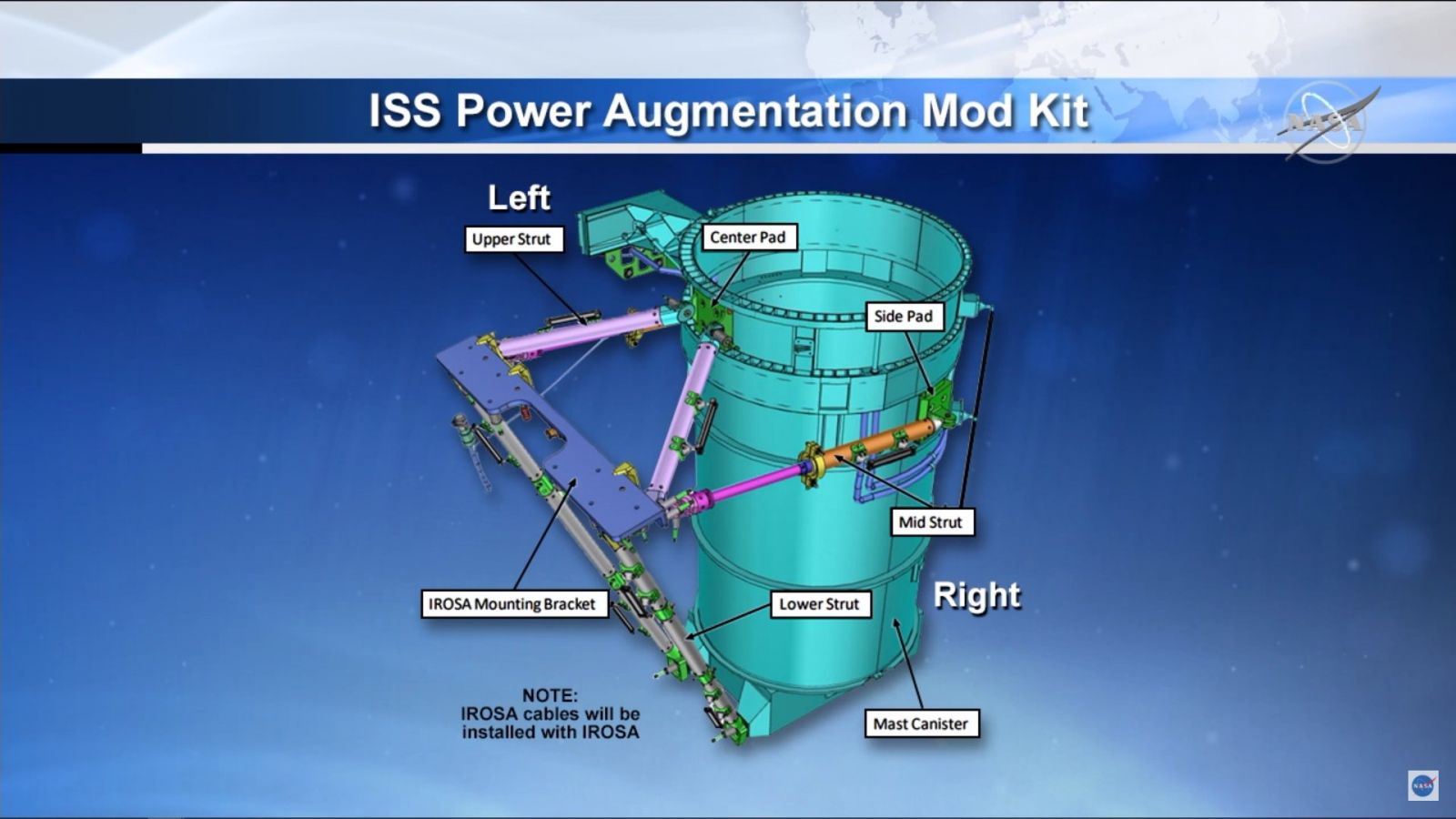 A diagram of a modification kit where the iROSA solar arrays are mounted. Credit: NASA

These new arrays are being added because the eight legacy solar array wings are beginning to lose efficiency, as expected, because of their age.

The new 63-foot (19-meter) long arrays are being deployed over the existing arrays, so they’ll lose some power-generating capacity. However, once all six iROSA devices are installed, the power producing capacity by the U.S. segment is set to increase to about 215 kilowatts from roughly 160 kilowatts before the upgrade.

Following this installation, they began preparing battery charge-discharge units for future robotics work. This involved removing and restraining thermal covers as well as breaking and resetting the torque of several bolts.

With the duo working at break-neck speed, there was enough time for a quick get-ahead task to be performed, which involved the spacewalkers checking access and clearance for patch panels under the Alpha Magnetic Spectrometer.

While the crew was making their way back to the Quest airlock, there were several issues that cropped up.

First, a safety tether on Chari’s spacesuit failed to retract, prompting the duo to bring gather the un-retracted tether inside the airlock. However, it took some effort to ensure the tether didn’t block the outer hatch.

Meanwhile, there was a false fire alarm initiated in the NG-17 Cygnus spacecraft. However, everything was deemed nominal and the crew continued the process of closing Quest’s outer hatch and repressurizing the airlock.

The spacewalk ended at 3:06 p.m. EDT (19:06 UTC), concluding Barron’s second outing and Chari’s first. It was also the 247th spacewalk in support of ISS assembly and maintenance since 1998.

Another spacewalk is planned for March 23 and is expected to see a medley of maintenance tasks performed. 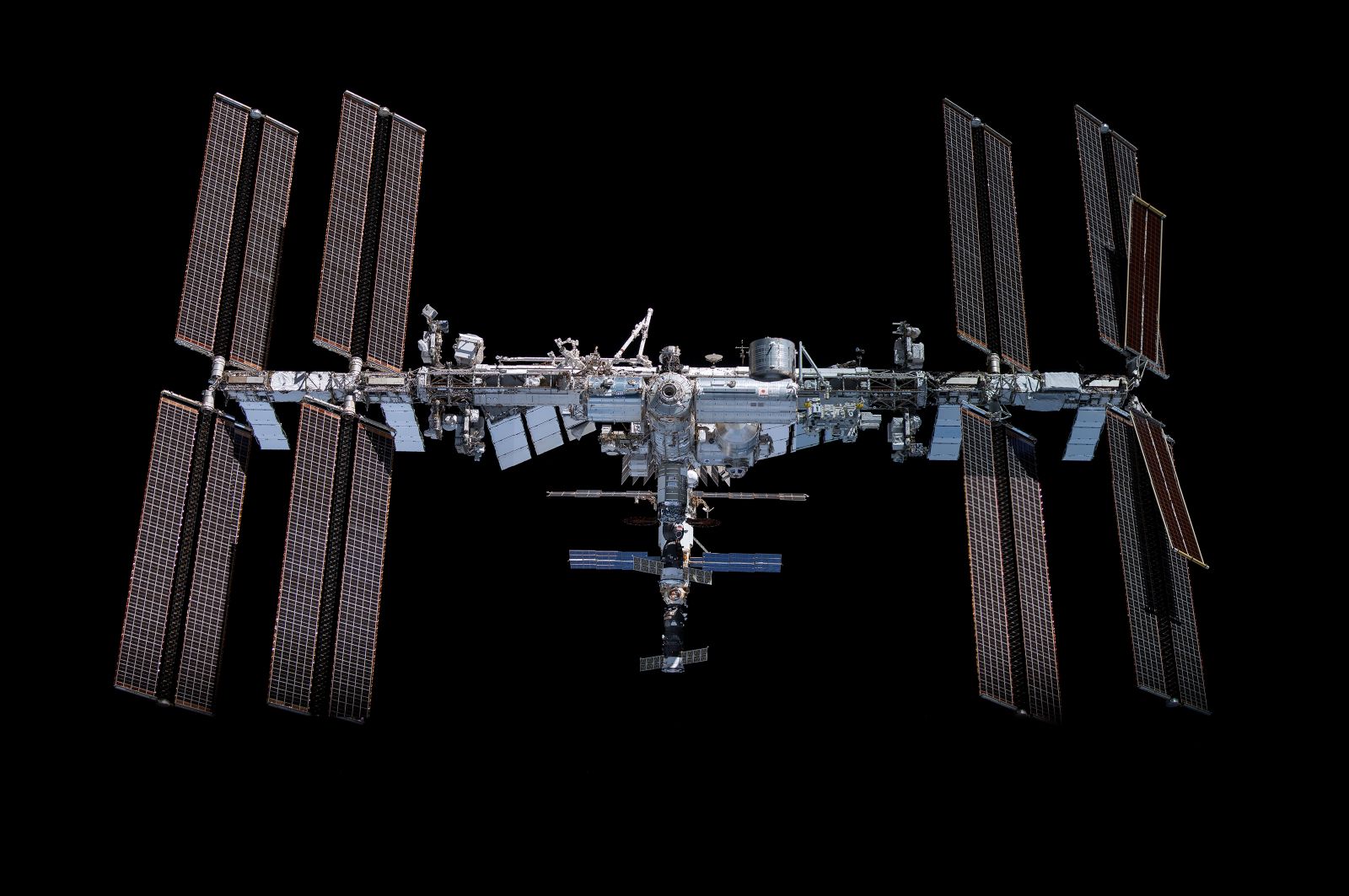 The ISS in November 2021. On the right side of the image are the first set of iROSA solar arrays installed in the summer of 2021. Four more arrays are expected to be delivered and installed by 2023. Credit: NASA