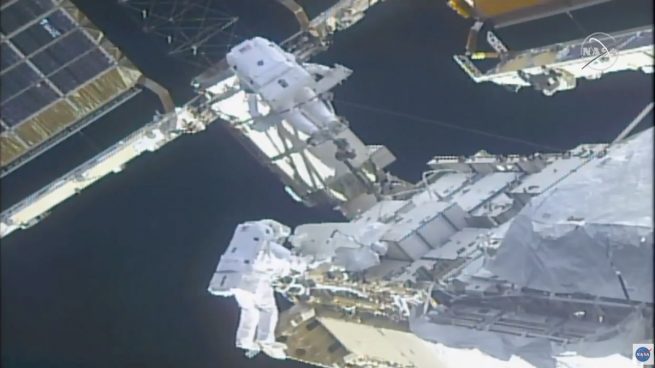 NASA astronauts Kate Rubins, top, and Victor Glover work to assemble a truss-like structure that will hold a set of new solar arrays in the near future. Credit: NASA

Expedition 64 flight engineers and NASA astronauts Kate Rubins and Victor Glover ventured outside the International Space Station for the first of two spacewalks to ready the outpost for new solar arrays later this year.

The seven hour extravehicular activity involved the duo assembling structures on the far port-side solar array mast canisters where a pair of new roll-out solar arrays are expected to be attached after their delivery later this year. The work is expected to be completed during another outing later this week.

Called U.S. EVA-71, the outing officially started at 6:12 a.m. EST (11:12 UTC) Feb. 28, 2021, when the suited-up astronauts, having already depressurized the Quest airlock and opened the outer hatch, switched their suits to battery power.

Once outside the two traversed to the P6 truss segment on the far left side of the ISS. 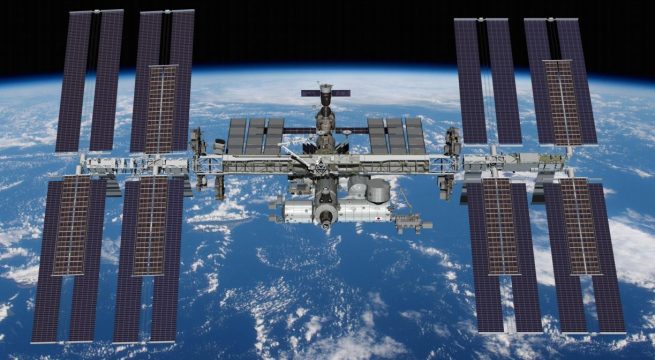 The location of the six iROSA solar arrays that are expected to be installed over the next year or so. Credit: NASA

Throughout the 2000s, a total of four pairs of solar arrays wings were brought to the outpost via several space shuttle missions. But since they were originally designed for a 15 year lifespan, those on the P6 truss in particular are beginning to show signs of expected degradation.

As such, NASA engineers have designed six new roll-out arrays based on the Roll-Out Solar Array, or ROSA, technology demonstration at the ISS several years ago.

While the new iROSAs will be smaller than the existing array wings, they are more powerful with modern solar technology.

They’ll be brought to the ISS in pairs over three cargo Dragon missions beginning with the CRS-22 mission as early as late spring 2021.

These arrays will be installed on support structures that need to be assembled by spacewalking astronauts beginning with U.S. EVA-71. 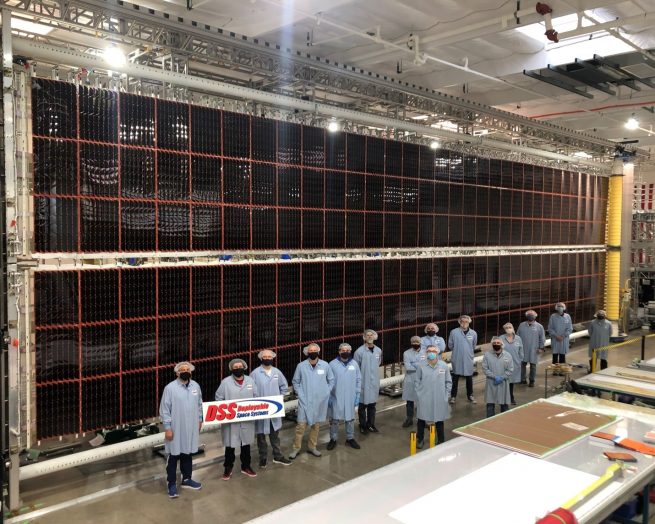 Once the pair made it to their work site, Glover began assembling a bracket structure while Rubins attached it and support struts to the 2B mast canister.

According to NASA, one bolt didn’t fully engage on the first attempt, requiring Rubins to use her Pistol Grip Tool, essentially a space-grade power drill, to back the bolt out and reseat it. Ultimately, she used a ratchet wrench to tighten it into a safe condition.

However, this will need to be secured further before the first iROSA is installed.

Once finished, work began on the 4B mast canister. Before the end of the spacewalk, Rubins and Glover finished the upper support and secured it to the exterior structure of the outpost.

NASA managers anticipate both structures on the P6 truss mast canisters will be completed by the next spacewalk, currently scheduled for March 5. 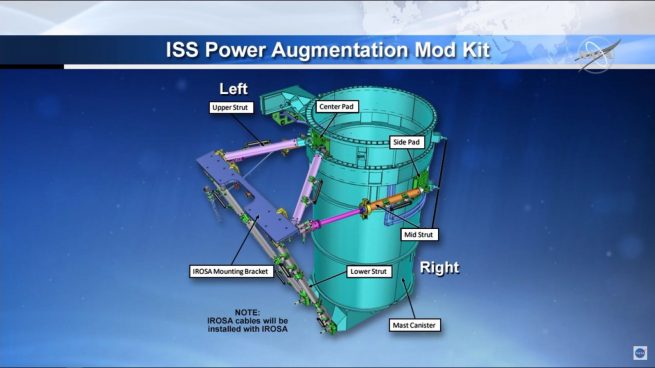 The modification kit where the iROSA will be mounted. Credit: NASA

Increasing the power of the ISS

When all six iROSAs are installed over the next year or so, NASA anticipates the available power at the outpost to increase from about 160 kilowatt hours to up to 215 kilowatt hours.

Ultimately, this is expected to ensure the ISS has enough power for not only future utilization, but for technology demonstrations for the Artemis Moon program and commercial utilization, the agency said.

Once all of the work was done for U.S. EVA-71, Rubins and Glover made their way back to the airlock, closed the hatch and began repressurizing the compartment, officially ending the spacewalk at 1:16 p.m. EST (18:16 UTC).

Today’s outing was the third spacewalk of 2021 and lasted 7 hours and 4 minutes. It was the third outing for both Glover and Rubins.

Since assembly and maintenance of the ISS began in 1998, there have been 235 spacewalks totaling 61 days, 14 hours and 11 minutes of time spent outside the outpost.