Expedition 38 ends as crew members touch down in Kazakhstan 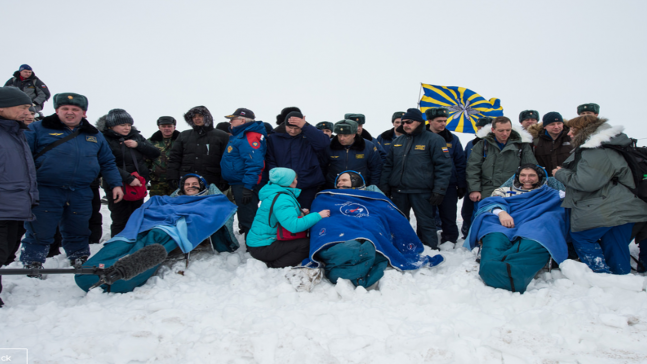 Monday brought three astronauts of the International Space Station’s Expedition 38 crew back to Earth, signaling and end to their si. NASA astronaut Michael Hopkins, alongside cosmonauts Oleg Kotov and Sergey Ryazanskiy of the Russian Federal Space Agency (Roscosmos), touched down in a remote stretch of the Kazakhstan steppes late Monday (EDT) having bear witness to some of the most memorable moments in recent spaceflight.

A NASA news release detailed just some of the groundbreaking research, lifecycle studies, and history that members of Expedition 38 bring back to the planet’s surface.

Studies on crystal growth, which free of the confines of gravity can reach unprecedented sizes, alongside experiments on plant development, and microgravity’s impact on liquids (important for rocket designs) were some of the planned experiments conducted by the team. With an eye on education, the ISS crew also participated in a number of student experiments about space and weightlessness, reaching into classrooms across the world. Yet perhaps among the most significant research focuses for the crewmembers was the emphasis on human health in space. With NASA and Roscosmos expecting to deploy two astronauts on the Station for a full year in 2015, Expedition 38 has played a critical role in unraveling many of the mysteries and concerns physicians, psychologists and nutritionists have about long duration spaceflight. Such investigations may also prove critical in advancing any future mission to mars, which will take in excess of a year and a half at the least.

As NASA continues to emphasize its commercial programs, Expedition 38 became the first crew to dock with Orbital Sciences Corporation’s Cygnus spacecraft on a Commercial Resupply mission, the success of which marked only the first of eight or more such missions over the next two years. The Expedition was likewise visited by two Russian Progress spacecraft over the course of their stay. The descent module for the Soyuz TMA-10M sits on the Kazakh steppes after completing its mission. Photo Credit: Bill Ingalls / NASA

In a gesture to the Station’s international symbolism, the returning astronauts (Hopkins, Kotov and Ryazanskiy) were first met by the other half of their crew on November 7, 2013 when NASA’s Mastracchio, traveling with cosmonaut Mikhail Tyurin and Koichi Wakata of the Japan Aerospace Exploration Agency (JAXA) arrived with the Olympic torch destined for Sochi.

Spacewalks (EVAs) also featured prominently for the crew. Hopkins, with Mastracchio, participated in his first two spacewalks to repair the faulty ammonia coolant pump near Christmas, while Kotov and Ryazanskiy successfully conducted three spacewalks for repairs, experiments, and even to display the Olympic torch in the vacuum of space.

Hopkins and Ryazanskiy each now have 166 days in space after completing their first missions. Kotov now has spent 526 days in space on three flights.

The end of Expedition 38 also marks the beginning of 39, with remaining crewmembers Mastracchio, Tyurin, and now-commander Wakata (the first ever from JAXA) awaiting the arrival in two-weeks time of NASA astronaut Steve Swanson riding with cosmonauts Alexander Skvortsov and Oleg Artemyev. They are scheduled to launch from Kazakhstan on March 25.