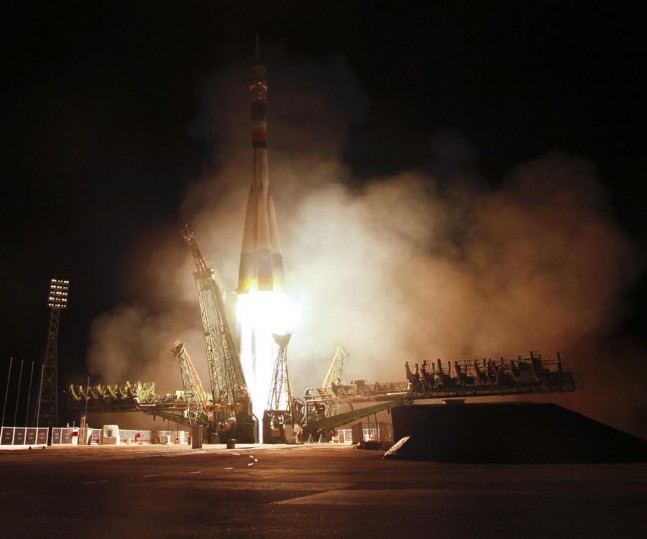 A cold and dark night in Kazakhstan was illuminated by the white-hot glow of Russian RD-108A and RD-107A rocket engines, as the Expedition 42/43 crew members aboard their Soyuz TMA-15M spacecraft blasted off towards low-Earth orbit (LEO). Their prime mission once they arrive at the International Space Station (ISS) will be the continued operations and upkeep of the orbiting laboratory and working with an array of ongoing scientific missions. Liftoff took place at 4:01 p.m. EST (3:01 a.m. Baikonur time).

The temperature outside was a chilly 18 degrees Fahrenheit. The Soyuz-FG launch vehicle helped to warm things up a bit when it fired its four main engines and began its journey to orbit.

Kazakhstan, like its neighbor Russia, is known for its notorious winters, where the bitter cold can reach well below freezing which is a common occurrence when winter is in full force. Roscosmos engineers and technicians appear to have perfected the materials and techniques needed to conduct successful launches in these extremely cold conditions. The three diverse crew members from different countries and cultural backgrounds, all felt the same crushing G-force sensation of 3.6 to 4.2 Gravity’s as the rocket left the launch pad. Despite their differences, the trio do share one thing in common, they are all members of their respective countries’ Air Forces – a fact reflected in their mission’s patch.

The Soyuz-FG rocket used the force of it’s four booster engines, fueled by a mixture of Rocket Propellant 1 (RP-1) and Liquid Oxygen, to break the hold of Earth’s gravity on craft and crew.

NASA astronaut Terry Virts is returning to the ISS in a far different method from when he first arrived in February of 2010 as the pilot of mission STS-130 on board space shuttle Endeavour. During the flight, Virts and other crew members helped with some of the final assembly elements of the orbiting laboratory. During STS-130, the crew delivered the Tranquility module and the Cupola, an observatory module which provides a seven-windowed view in a dome-like configuration, to the station. The Expedition 42 / 43 crew members will take an expedited path to the orbiting lab, and should arrive about six hours after launch. Photo Credit: Aubrey Gemignani /NASA

NASA astronaut Reid Wisemen gained a large social media following and the public’s notoriety, not only for his science and engineering work while aboard the ISS, but for his photos and videos shared through social media sites like Twitter and Vine. Virts who is also active on Twitter will likely continue to provide striking images of the Earth’s surface taken during his time within the ISS’s Cupola module.

Three spacewalks are scheduled for the beginning of next year, and are planned to be conducted by Virts and Willmore to attach a new docking aperture to the U.S. portion of the space station and the installation of a new Common Communications for Visiting Vehicles (C2V2) communications device. These extra-vehicular activities (EVAs) are being conducted to prepare the ISS for future crewed missions from commercial space companies, Boeing and SpaceX, in three to four years time.

This was directly addressed by NASA’s International Space Station Program Manager, Mike Suffredini, who spoke to the TMA-15M crew members at a pre-launch press conference and said: “as you know, this is paving the way for commercial crew vehicles to arrive at the ISS, hopefully by late [2017] to early [2018].”

Several experiments will also take up a good portion of Expedition 42 / 43’s time while they are in orbit. NASA recently installed the first 3D printer (provided by Made in Space as part of the International Space Station Research Competition) to be operated in space. This technology will hopefully allow for on-board manufacturing of items by the crew when repairs or replacements are required. Not only can this be vital in a serious repair or maintenance situation, but can also help cut costs for delivering specialized parts to orbit on future missions.

Another experiment currently being done aboard the ISS is Seedling Growth-2, which focuses on growing plants in microgravity. The continued research in the field of space-based agriculture is  consider a critical aspect of long-duration mission in deep space, that are planned for the coming decades.

After a six-hour ride to rendezvous with the ISS, the crew should be docked and aboard the $100 billion orbiting outpost late this evening.