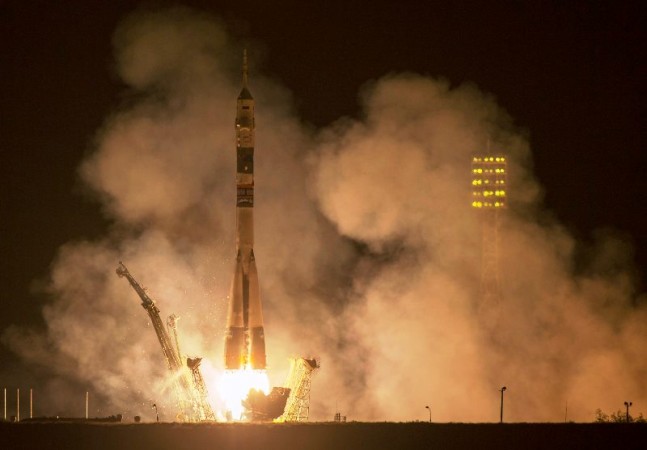 The crew of Expedition 41 successfully launched at 4:25 p.m. EDT (2025 GMT) to the the International Space Station (ISS ) from the LC-1 launch pad located at the Baikonur Cosmodrome in Kazakhstan. Soyuz Commander Alexander Samokutyaev and Flight Engineers Barry Wilmore and Elena Serova lifted off on what is planned as a six-hour, four-orbit ride to the station’s Poisk docking compartment inside the Soyuz TMA-14M spacecraft.

The trio will join Maksim Surayev (Max Suraev), Reid Wiseman, and European Space Agency (ESA ) astronaut Alex Gerst who have been on the orbiting laboratory since May 28. The crew of six will remain on the station until November 10 when Surayev, Wiseman, and Gerst will return to Earth. Expedition 40’s time on the ISS closed earlier this month when NASA astronaut Steve Swanson returned to Earth along with Flight Engineers Oleg Artemyev and Alexander Skvortsov on Sept. 10. Suiting up for today’s flight (in Russian Sokol spacesuits) actually began about four and a half hours prior to lift off. The trio arrived at the launch pad at 1:50 p.m. EDT (1750 GMT).

The LC-1 launch complex which hosted the Expedition 41/42 crew members flight is also known as “Gagarin’s Start” – as it is the location from which Yuri Gagarin, the first man in space, roared to orbit.

The Soyuz-FG booster carried out a near flawless launch with the ride “uphill” following the normal flow of events that long-time followers of the venerable Soyuz booster have become accustomed to. Upon reaching orbit however, only one of the Soyuz TMA-14M spacecraft’s two solar arrays deployed. The crew on board the spacecraft were not in any jeopardy from this anomaly however and engineers back on the ground are currently trouble-shooting the issue. During its first orbit of Earth, the Soyuz spacecraft will conduct one of two planned burns.

Once TMA-14M is docked, there will be a total of five spacecraft docked to the station. These include two other Soyuz vehicles, the Progress 56 resupply ship, ESA’s “Georges Lemaître” ATV-5, and SpaceX’s Dragon CRS-4 commercial cargo ship which arrived this past Tuesday.

Once the hatches are open, Serova will become the first female Cosmonaut to visit the station. She is the first female cosmonaut in 17 years to fly into space. She is only the fourth Russian woman to fly into the black (although the Soviet Union flew the first female astronaut, Valentina Tereshkove in 1967 – few have followed in her footsteps). Many well-wishers at the Cosmodrome wore shirts that said, “Go, Lana, go!” in support of the cosmonaut’s voyage.

For both Wilmore and Samokutyaev, today’s launch marked the second of their career. Wilmore was the pilot of Space Shuttle Atlantis on STS-129 in 2009 and Samokutyaev was a member of the Expedition 27/28 crew in 2011. Some of the cargo flown aboard this Soyuz will be used in research investigations that are either currently ongoing or planned aboard the International Space Station. Expedition 41 will focus its research efforts on seedling growth, observation of meteors entering Earth’s atmosphere, and studies of animal biology and bone and muscle physiology.

One such investigation is Space Headaches which uses questionnaires to collect information about the prevalence and characteristics of crew members’ headaches in microgravity. This information is used to develop future countermeasures for headaches often caused by intracranial pressure change. Expedition 41/42 is scheduled to return home on March 11, 2015. Upon their undocking, Expedition 43 will have officially begun with Commander Anton Shkaplerov and Flight Engineers Terry Virts (NASA) and Samantha Cristoforetti (ESA) staying behind and taking the helm of the 16-year-old complex.

The Soyuz-FG booster which carried out today’s flight can trace its lineage all the way back to the earliest days of space travel. The launch vehicle is a modernized version of the Soyuz-U booster. Developed and built by TsSKB-Progress, the Soyuz-FG is the rocket that Russia has used to send crews to the International Space Station since October 30, 2002, with the rocket lofting both the Soyuz TMA and Soyuz TMA-M vehicles. As with most boosters that were used during the 1960s and 70s, the Soyuz rocket is, in essence, a modified intercontinental ballistic missile. In this case, the Soyuz rocket is based on the Vostok design which has its roots in the 8K74 or R-7A Semyorka.

A variant of the Soyuz-FG, the Soyuz, the Soyuz-FG / Fregat is used by Starsem, a European-Russian firm and is employed to carry out commercial launches.

Similarly to the rocket that provide the thrust to place it in orbit, the Soyuz TMA-14M, was used by the former Soviet Union for its plans to beat the United States during the Space Race of the 1960s. With the American flag planted firmly into the lunar regolith, the U.S.S.R opted to produce a series of space stations in Earth orbit – with the Soyuz spacecraft serving as the vehicle to ferry cosmonauts to these orbiting outposts.

The Korolyov Design Bureau designed, developed and constructed the Soyuz as the follow-on for the Voskhod spacecraft (much as NASA went from the Mercury, Gemini and Apollo spacecraft as the agency worked to land crews on the Moon).

The first Soyuz took to the skies on Nov. 28, 1966 on an unmanned test flight. The first crewed flight, that of Soyuz 1, ended in tragedy with the sole cosmonaut on board, Vladimir Komarov being killed when his Soyuz spacecraft slammed into the Earth following a parachute failure. Soviet engineers managed to get things right and did not encounter another accident until Soyuz 11, where the three man crew, consisting of Vladislav Volkov, Georgy Dobrovolsky, and Viktor Patsayev. The trio died when the Soyuz’s cabin depressurized on June 30, 1971.

These two tragedies are the only blemishes on a track record that stretches back nearly 50 years. The Soyuz spacecraft is considered by many space experts to be one of the most reliable crew-rated spacecraft currently in operation. Soyuz also serves as the “lifeboat” for the station, with one of the spacecraft docked to the orbiting laboratory at all times.

The heath considerations of the Astronauts need to be gauzed with sufficient pre-medical data.