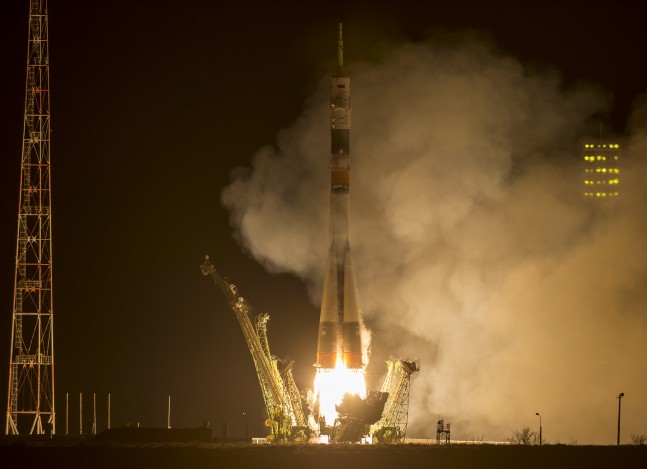 A trio of veteran astronauts lifted off from the Baikonur cosmodrome at 3:42 p.m. EDT on March 27. Photo Credit: NASA

BAIKONUR, Kazakhstan — A trio of veteran astronauts are on their way to the International Space Station (ISS) following a picture perfect  launch from the Baikonur Cosmodrome in Kazakhstan at 3:42 p.m. EDT Friday March 27 (1:42 a.m., March 28 Baikonur time).

NASA astronaut Scott Kelly and Russian (Roscosmos) cosmonauts Mikhail Kornienko and Gennady Padalka will join the rest of the Expedition 43 crew already on station. Expedition 43 commander and NASA astronaut Terry Virts, along with European Space Agency (ESA) astronaut Samantha Cristofretti and Russian cosmonaut Anton Shkaplerov have been on station since November and are awaiting the arrival of the rest of their crew. Scott Kelly, Mikhail Kornienko, and Gennady Padalka are set to join the rest of the Expedition 43 crew on station. Photo Credit: NASA

Kelly and Kornienko are part of a special extended mission and will spend about a year living and working on the orbiting laboratory to help scientists better understand how the human body reacts and adapts to the harsh environment of space. Much is known about how zero gravity affects the human body from 0-6 months, but very little is known about the effects beyond the 6 month mark. The data collected during Kelly and Kornienko’s time in space will be crucial in preparing for the journey beyond low-Earth orbit.

Both Scott Kelly and Mikhail Kornienko will spend nearly twelve months conducting important human research studies that will provide new insights into how the human body adjusts to weightlessness, isolation, radiation and stress of long-duration spaceflight. In addition, Kelly’s identical twin brother retired NASA astronaut Mark Kelly, will be participating in special experiments here on Earth to help compare the effects of microgravity on the human body.

The one-year mission will focus on seven key areas of human research. Functional studies will examine crew member performance during and after the 12-month expedition. Behavioral studies will monitor sleep patterns and exercise routines. Visual impairment will be studied by measuring changes in pressure inside the human skull. Metabolic investigations will examine the immune system and effects of stress. Physical performance will be monitored through exercise examinations. Microbial changes in the crew will be monitored, as well as the human factors associated with how the crew interacts aboard the station. Each of these key elements carries a potential benefit for populations here on Earth, from functional improvements for patients recovering from a long period of bed rest to improving the monitoring of immune functions of people on Earth with altered immunity.

Data from Kelly and Kornienko’s 342-day expedition will be used to determine whether there are ways to further reduce the risks on future long-duration missions necessary for deep space missions. The tests will track any degeneration or evolution that occurs in the human body from extended exposure to a microgravity environment. These new twin studies are a multi-faceted national cooperation between universities, corporations and government laboratory expertise.

The Soyuz-FG booster which carried out today’s flight can trace its lineage all the way back to the earliest days of space travel. The launch vehicle is a modernized version of the Soyuz-U booster.

Developed and built by TsSKB-Progress, the Soyuz-FG is the rocket that Russia has used to send crews to the International Space Station since October 30, 2002, with the rocket lofting both the Soyuz TMA and Soyuz TMA-M vehicles. The Soyuz races to orbit, disappearing into the clouds over Baikonur. Photo Credit: NASA

The rocket has four liquid-fueled strap on boosters which use the same fuel as the core stage of the Soyuz-FG rocket itself, RP-1 (a highly-refined version of kerosene) and liquid oxygen. One of the key differences between the four boosters and the core stage – is the type of engines they use.

As with most boosters that were used during the 1960s and 70s, the Soyuz rocket is, in essence, a modified intercontinental ballistic missile. In this case, the Soyuz rocket is based on the Vostok design which has its roots in the 8K74 or R-7A Semyorka. A variant of the Soyuz-FG, the Soyuz, the Soyuz-FG / Fregat is used by Starsem, a European-Russian firm and is employed to carry out commercial launches. Scott Kelly gives the thumbs up from inside the Soyuz following liftoff. Photo Credit: NASA TV

Similarly to the rocket that provide the thrust to place it in orbit, the Soyuz TMA-14M, was used by the former Soviet Union for its plans to beat the United States during the Space Race of the 1960s. With the American flag planted firmly into the lunar regolith, the U.S.S.R opted to produce a series of space stations in Earth orbit – with the Soyuz spacecraft serving as the vehicle to ferry cosmonauts to these orbiting outposts. The Korolyov Design Bureau designed, developed and constructed the Soyuz as the follow-on for the Voskhod spacecraft (much as NASA went from the Mercury, Gemini and Apollo spacecraft as the agency worked to land crews on the Moon).

The Soyuz spacecraft is considered by many space experts to be one of the most reliable crew-rated spacecraft currently in operation. Soyuz also serves as the “lifeboat” for the station, with one of the spacecraft docked to the orbiting laboratory at all times. This flight marks the 7th flight where the Soyuz launched and docked with the ISS in the same day. Docking is scheduled for 8:36 p.m. EDT with the hatch set to open at 10:15 p.m. EDT.

A great story and a great historical lesson!

Ir seems that without any space race in the 50’s, we humans would not yet been on the moon!