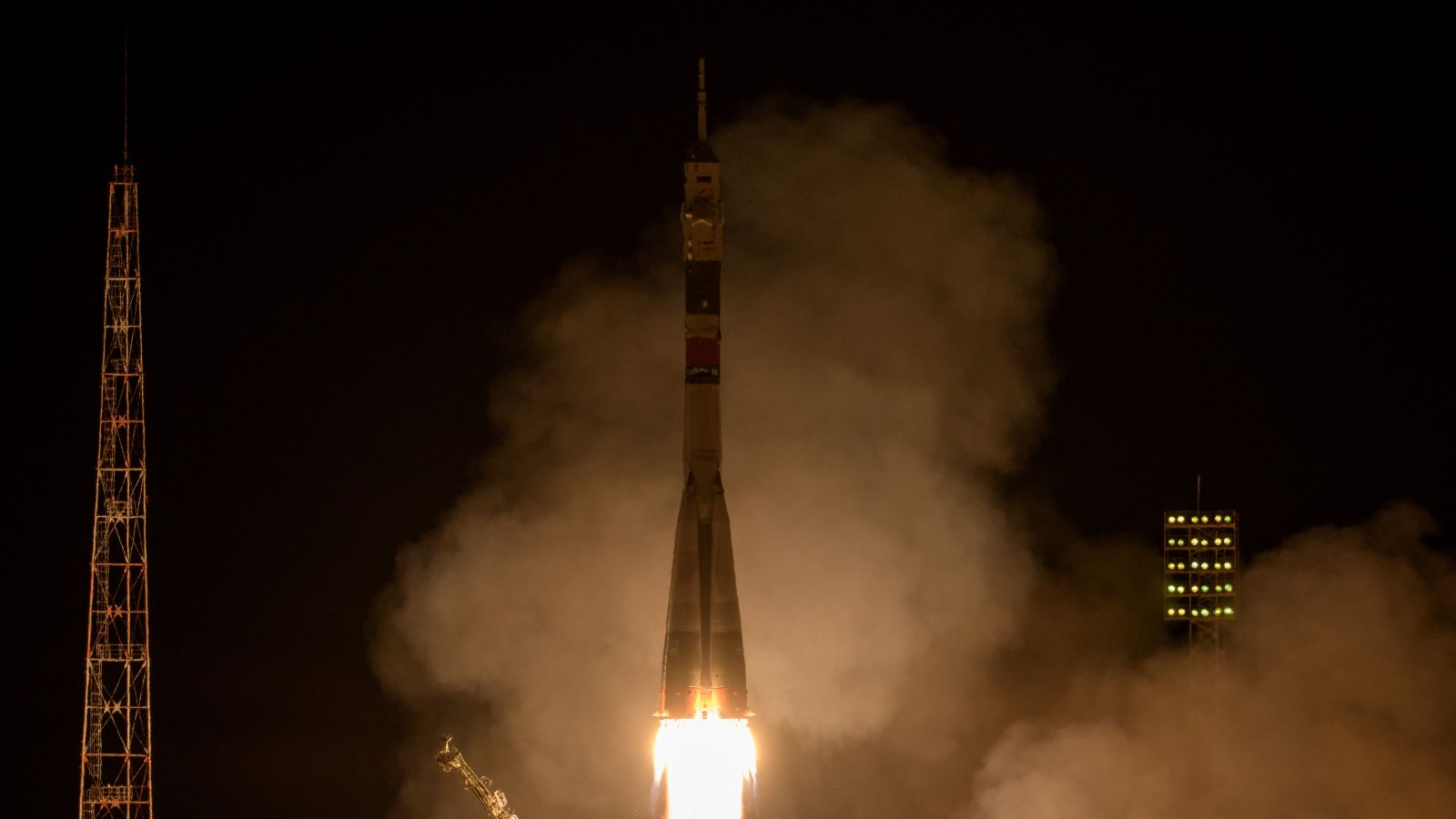 Soyuz MS-12 launches with two astronauts and a cosmonaut on a trip to the International Space Station. Photo Credit: Bill Ingalls / NASA

BAIKONUR COSMODROME, Kazakhstan — Russian cosmonaut Aleksey Ovchinin and NASA astronauts Nick Hague and Christina Koch launched in their Soyuz MS-12 spacecraft to travel to the ISS for a six-month stay.

The liftoff was of special interest to the space community at-large, as it was Hague and Ovchinin’s second attempt to reach the ISS after a booster malfunction triggered an emergency abort during their Soyuz MS-10 launch on Oct. 11, 2018.

During that flight, the two men endured a sudden and harrowing ride away from their launch vehicle when one of the four first stage boosters failed to separate properly, damaging the rocket’s main stage. Onboard cameras showed the two men buffeting side to side as their spacecraft screamed away from the tumbling rocket. 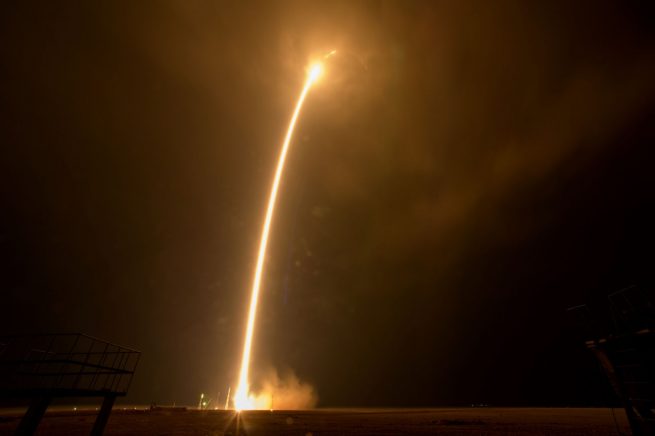 They experienced a 6.5 G ballistic reentry and landed safely downrange in Kazakhstan. They settled to a landing, ironically, just 30 miles (48 kilometers) from the town where recovery forces are staged to rush out and tend to normally scheduled Soyuz landings. Their recovery was therefore quick, and the two men suffered no ill effects from their short but eventful journey.

The launch failure left the ISS short two crew members and necessitated the Expedition 57 crew remaining on the station a bit longer until the arrival of the Soyuz MS-11 crew of Roscosmos cosmonaut Oleg Kononenko, NASA astronaut Anne McClain, and David Saint Jacques of the Canadian Space Agency on Dec. 3. Numerous factors in ISS scheduling priorities and crew rotation considerations resulted in a reshuffling of crew assignments, ultimately placing Hague and Ovchinin on the Soyuz MS-12, along with Koch who was already training for the mission.

Kansas native Tyler “Nick” Hague is an Air Force pilot and NASA astronaut making a second attempt at his first flight into orbit on this mission. Prior to his selection as an astronaut in 2013, he was part of the Air Force Fellows program in Washington, working as an adviser to the U.S. Senate on matters of defense and foreign policy.

Cosmonaut Ovchinin is the commander of Soyuz MS-12, and is on his second mission. Ovchinin previously flew to the ISS in 2016 as part of Expedition 47 and 48.

Christina Hammock Koch is from North Carolina and has a background in electrical engineering. She is on her first mission into space, and is also part of the 2013 astronaut class. Her work as a research field engineer included several deployments to Arctic and Antarctic field stations. 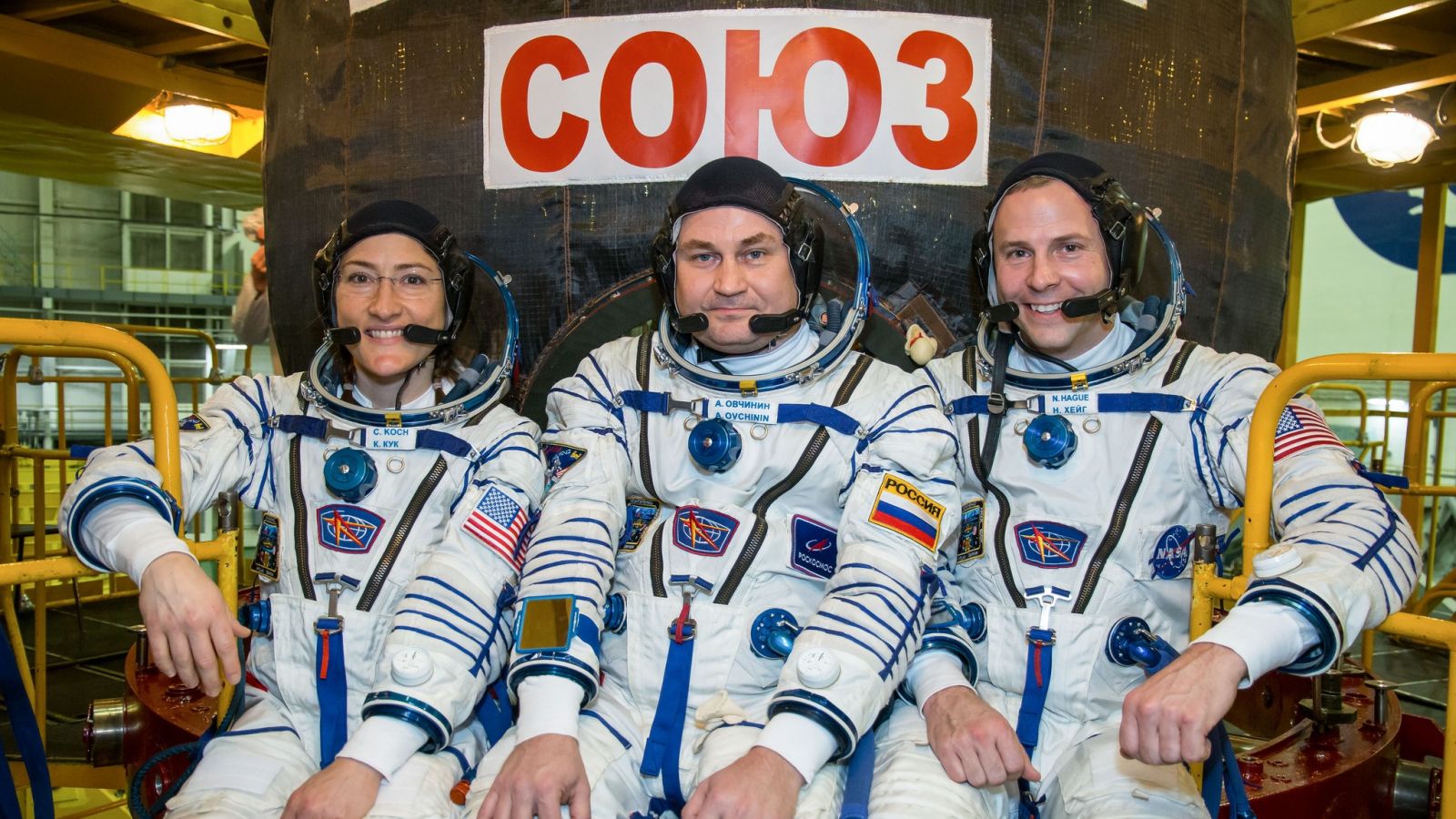 Launch day began with Hague, Koch, and Ovchinin waking at the Cosmonaut Hotel in Baikonur some nine hours before the scheduled liftoff. The crew, along with their backups, Roscosmos cosmonaut Aleksandr Skvortsov, ESA astronaut Luca Parmitano, and NASA astronaut Andrew Morgan, then boarded a bus for the short ride to site 254, where Hague, Ovchinin, and Koch began suiting up in their Sokol launch and entry suits.

At about 7:15 p.m. local time, fueling operations began on the 162-foot (49.5 meter) tall Soyuz-FG booster rocket. The loading of kerosene and liquid oxygen continued for about the next two hours.

After their final medical checks were completed and their Sokol suits were donned, the three each underwent a pressure leak test of their suits, snapping their visors shut and inflating the suits to pressure. Once that was successful, they unsnapped their visors and took seats at a viewing window, talking by microphone with their families and then briefly with agency leaders of NASA and Roscosmos. 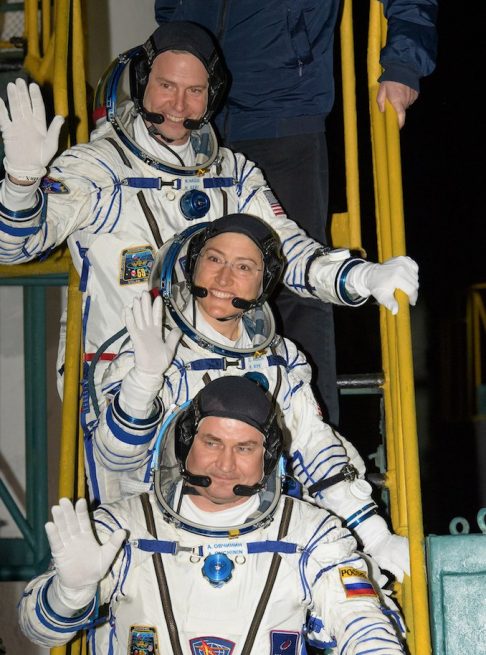 Hague, Koch, and Ovchinin were then escorted outside, and with a crowd of spectators watching and cheering, made the ceremonial walk to take their place before the State Commission officials. After Ovchinin reported their readiness to fly, they stepped aboard a bus and departed for the launch pad.

A 20-minute drive delivered the crew to pad 1/5, known as Gagarin’s Start, the same pad from which Yuri Gagarin launched to become the first human in space nearly 58 years ago. The three crew members walked up a narrow set of stairs to a landing at the base of the rocket, waved some goodbyes, and stepped into the cramped elevator which took them to the top of the rocket, where technicians assisted them with their entry into the Soyuz spacecraft.

With the crew secured in their seats in the descent module, the hatch was sealed and a series of pressurization and leak checks were performed. The checks were completed about 1 hour and 20 minutes before launch.

With 45 minutes in the countdown, the two clamshell service towers surrounding the Soyuz launch vehicle slowly retracted and lowered away from the rocket.

The crew’s Sokol suits were pressurized and checked for leaks with about 30 minutes in the countdown. By then the launchpad was fully evacuated, and the clamshell towers were horizontal. The rocket stood on the pad with only the umbilical masts attached to it. The countdown proceeded without issue.

At T-minus 8 minutes, the crew closed their helmets and initiated suit air. Over the next few minutes the propellant tanks were pressurized and topped off until loading was terminated.

With 1 minute till liftoff the Soyuz went on internal power and the countdown auto sequence began. At T-minus 40 seconds, the third stage umbilical retracted. Twenty seconds later, the four RD-107A booster engines and the core RD-108A core stage engine ignited. Five seconds after that, the core stage umbilical retracted, and at T-minus 5 seconds the engines roared to full thrust level. 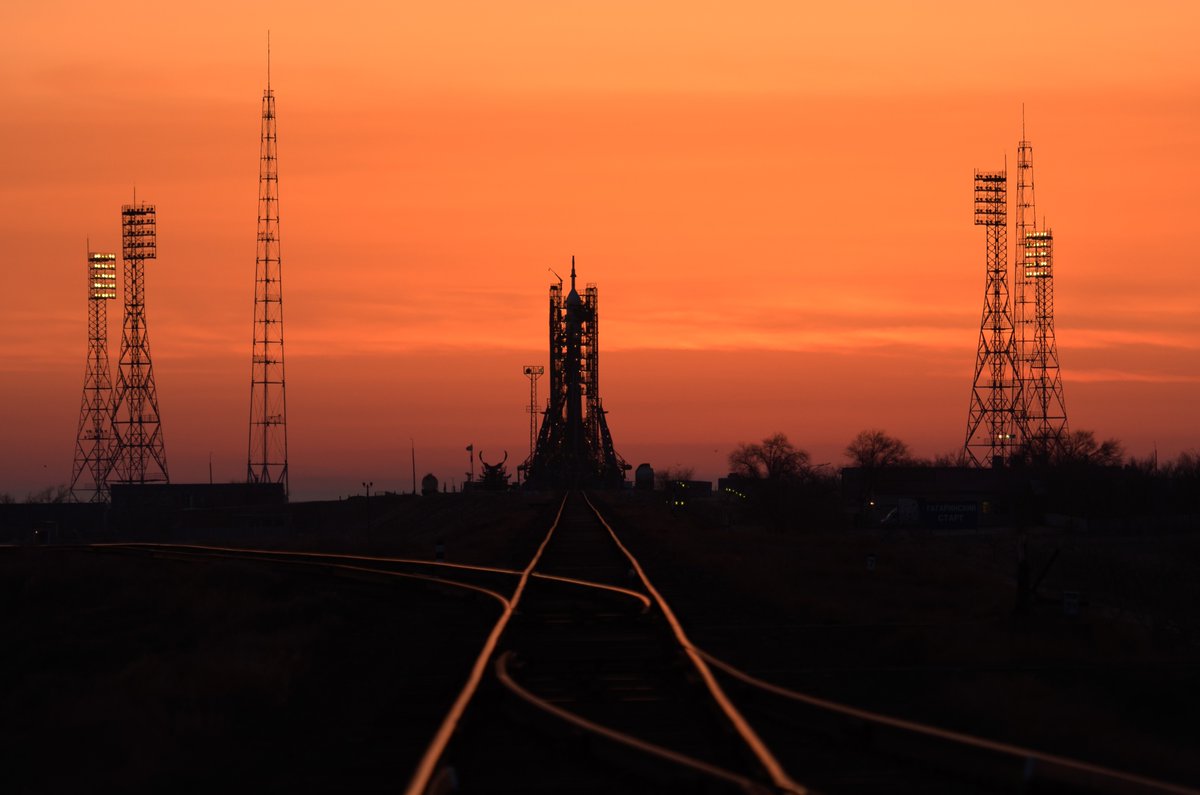 Soyuz MS-12 as seen in the hours before liftoff. Photo Credit: NASA

With the countdown clock at zero, the rocket rose swiftly off the pad and soared into the night sky over the Kazakh steppes. The engines reverberated across the open distances as the 141st Soyuz rocket climbed higher.

At 45 seconds into the flight, the vehicle and its crew reached an altitude of 6.8 miles (11 kilometers) and were traveling at a speed of 1,025 mph (1,650 kph). This was the phase of Max Q or maximum aerodynamic pressure on the vehicle.

Nearly two minutes after launch, the four strap-on boosters separated perfectly. The boosters tumbled away, leaving the core booster to continue its climb toward orbit, and notably pushing Hague and Ovchinin past the moment of trouble they encountered on their previous flight. 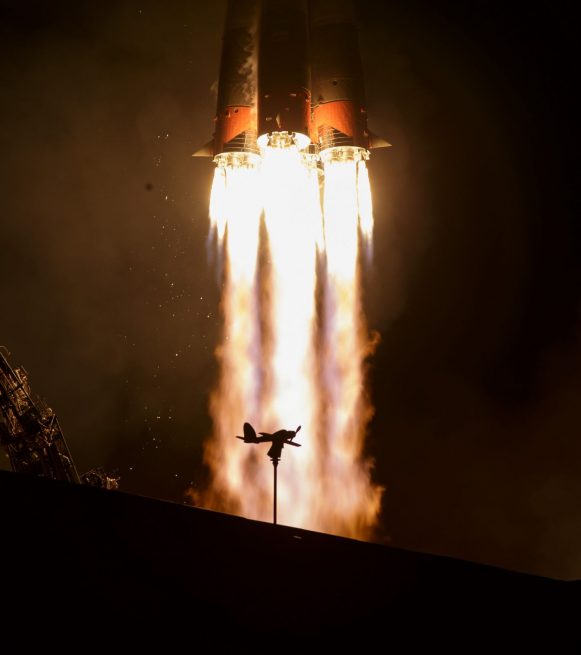 The vehicle was already 24 miles (39 kilometers) from the launchpad and 25 miles (41 kilometers) high, traveling at 3,490 mph (5,615 kph). About 30 seconds later the payload fairing separated into its two halves and fell away, exposing Soyuz MS-12 to space for the first time.

At 4 minutes, 45 seconds, a series of events called hot staging occurred, in which the upper or third stage engine begins spooling up, ejecting its exhaust upon the still-attached core stage through an open metal lattice structure connecting the two stages. The core stage then shut down, and two seconds later, when the third stage RD-0110 engine reached its full thrust, the core stage separated and fell away.

The third stage continued firing until 8 minutes and 45 seconds into the flight. Seconds later the Soyuz MS-12 spacecraft separated from the third stage. The antennas and twin solar panels were deployed. Soyuz MS-12 was in orbit.

Catching up with ISS

Over the next 6 hours and the course of only 4 orbits, the spacecraft raised its altitude from about 124 miles (200 kilometers) to about 250 miles (400 kilometers) and maneuvered to a fully automated docking at the Rassvet module, an Earth-facing port of the Russian segment of the ISS. Contact with the port took place at 9:01 p.m. EDT (01:01 GMT March 15).

Upon arrival and hatch opening at about 11:07 p.m. EDT (03:07 GMT March 15), Hague, Ovchinin, and Koch joined the now Expedition 59 Commander Kononenko and Flight Engineers McClain and Saint-Jacques, who have been on the station since Dec. 3, and have comprised the three-person crew of the ISS since the departure of the Soyuz MS-09 crew on Dec. 20.

This pairing of Koch and McClain will provide a bit of history, as ISS U.S. EVA-53 will be the first ever all-female spacewalk.

Hague is scheduled for a second spacewalk, this time with David Saint Jacques, on April 8, to do work on the Truss Jumper mechanism. Ovchinin and Kononenko will be spacewalking sometime in late May. 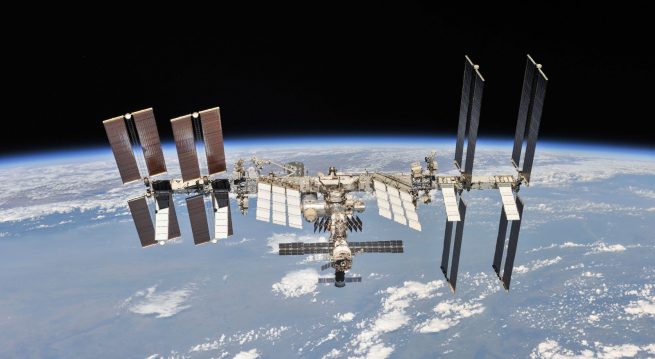 Schedule changes and busy times ahead

Hague, Ovchinin, and Koch are currently scheduled to conduct their work aboard the station on a mission lasting 204 days, coming home in their Soyuz spacecraft on Oct. 3. But changes to that schedule appear likely and a scenario of ride-trading may come into play.

The Soyuz MS-13 crew of Russian cosmonaut Aleksandr Skvortsov, European Space Agency astronaut Luca Parmitano, and NASA astronaut Drew Morgan is planned to arrive on July 6. Soyuz MS-14 will be an uncrewed flight, as it is a test flight for modifications intended for use in the Soyuz 2.1a launch vehicle. 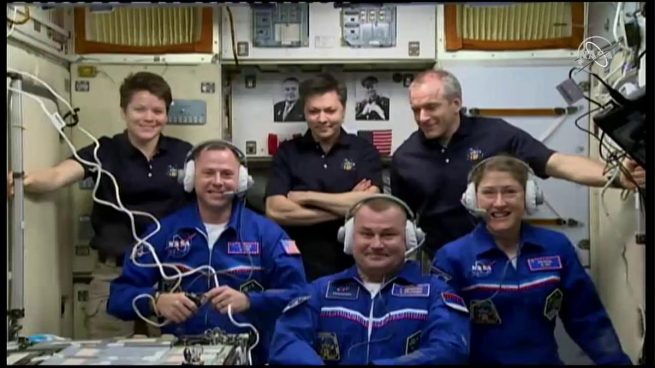 Soyuz MS-15, with the crew of Oleg Skripochka of Roscosmos, NASA astronaut Christopher Cassidy, and the first astronaut from the United Arab Emirates (UAE), is currently scheduled to arrive at the ISS on Sept. 25.

To round our the scheduling, Skvortsov and Parmitano’s MS-13 launch crew mate, Morgan, might also stay on the ISS an extra three months, coming home with Skripochka and Cassidy on Soyuz MS-15 sometime in March of 2020.

Amidst this schedule also are the likely arrivals of one or perhaps both of the crews from the first two Commercial Crew Program spacecraft.

On this current timetable, Koch would have the best chance of being aboard the station for the arrival of both Commercial Crew spacecraft.

Regardless of their return time, Hague, Ovchinin, and Koch will take part in about 250 research investigations and technology demonstrations during their stay on the ISS. They, along with Kononenko, McClain, and Saint Jacques, make up the ISS crew of Expedition 59, with Kononenko in command on his fourth spaceflight.

Ovchinin is scheduled to take over as Commander of Expedition 60 on June 25, 2019.