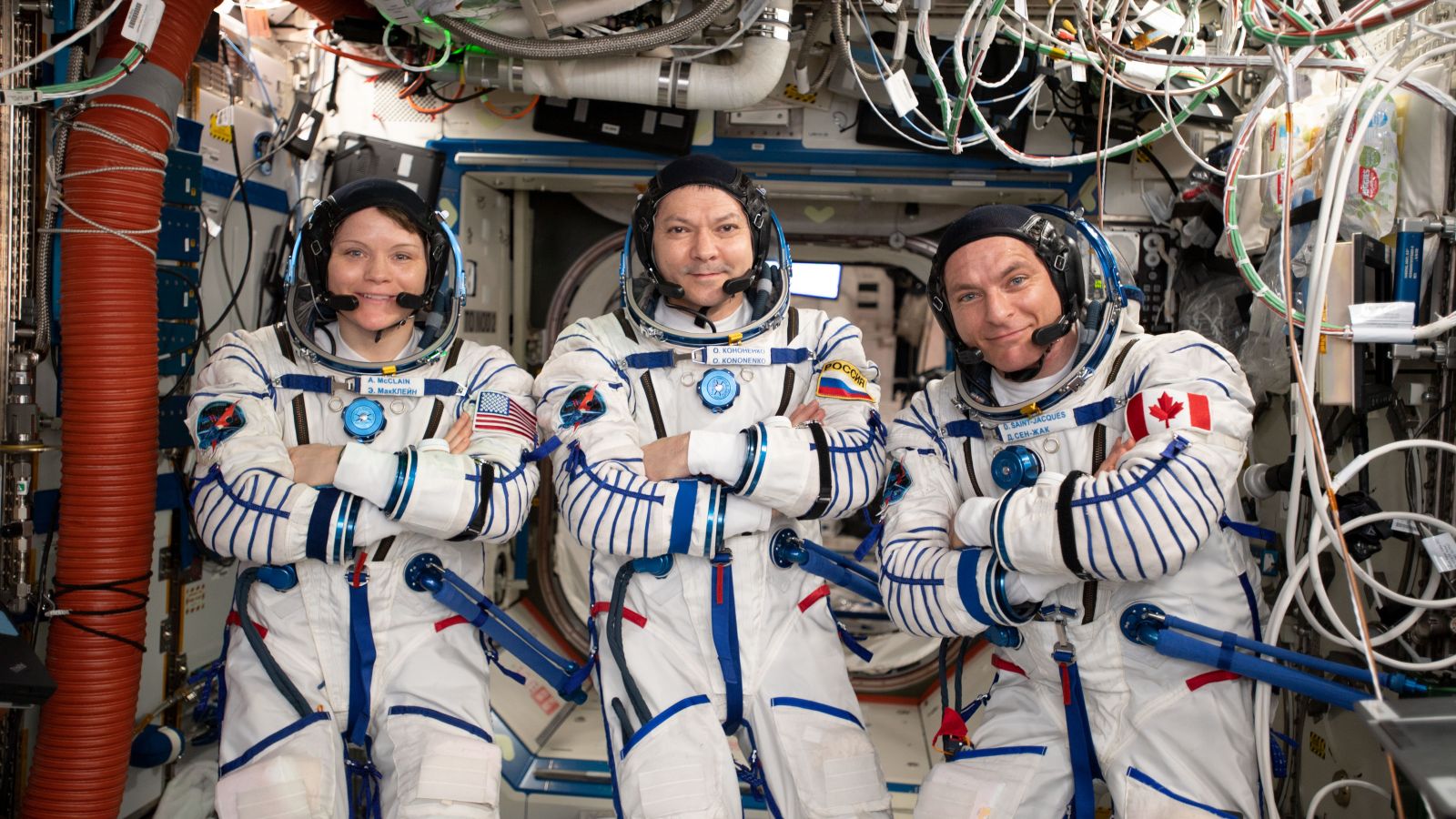 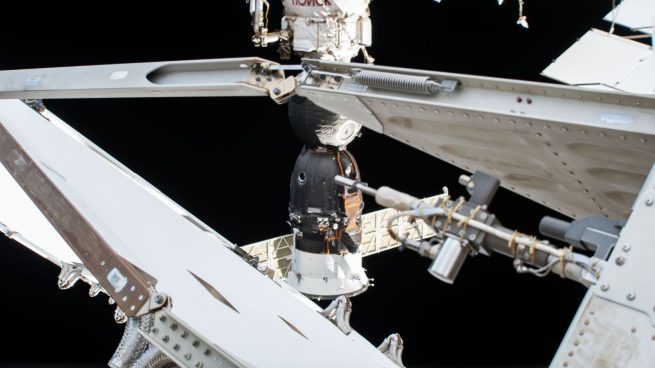 Soyuz MS-11 docked to the Poisk module on the space-facing side of the International Space Station. Photo Credit: NASA

The trio had been in orbit since Dec. 3, 2018, when they launched to the ISS to join the in-progress Expedition 57 crew. Over the course of their seven-month stay aboard the ISS, they travelled 86.4 million miles over 3,264 orbits around Earth.

On Dec. 20, they transitioned to Expedition 58 when the Soyuz MS-09 crew left. Once Soyuz MS-12 launched and docked to the ISS on March 15, they formed the six-person Expedition 59 crew. Kononenko was the commander of both Expedition 58 and 59.

According to NASA, “the Expedition 59 crew contributed to hundreds of experiments in biology, biotechnology, physical science and Earth science, including investigations into small devices that replicate the structure and function of human organs, editing DNA in space for the first time and recycling 3D-printed material.”

Additionally, they oversaw all three Dragon vehicles depart as well as the Cygnus NG-10 spacecraft, which had already been aboard the outpost upon their December 2018 arrival. 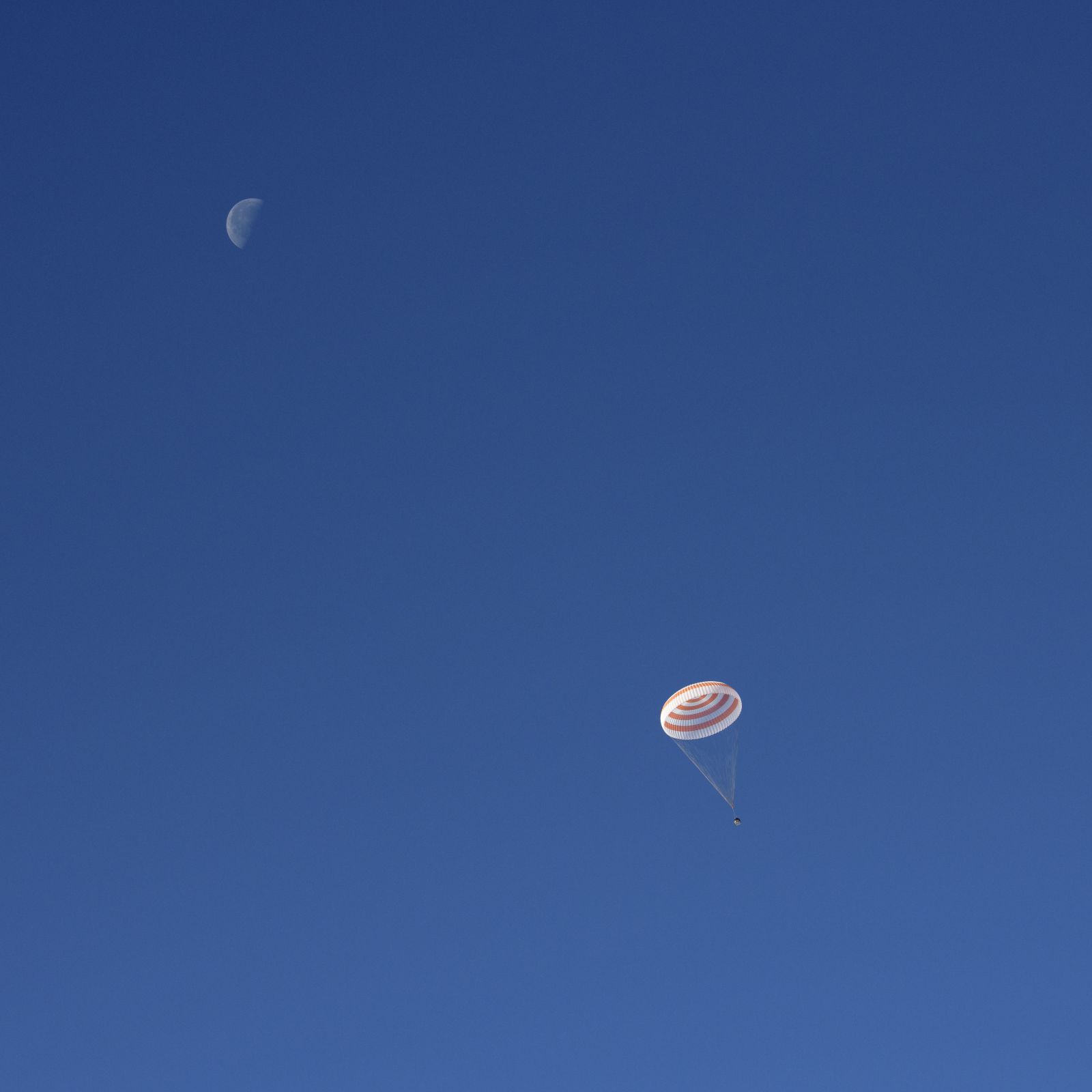 Kononenko, on his fourth mission, performed two spacewalks totaling 13 hours, 46 minutes. However, according to NASA his career total is 32 hours, 13 minutes over five spacewalks. 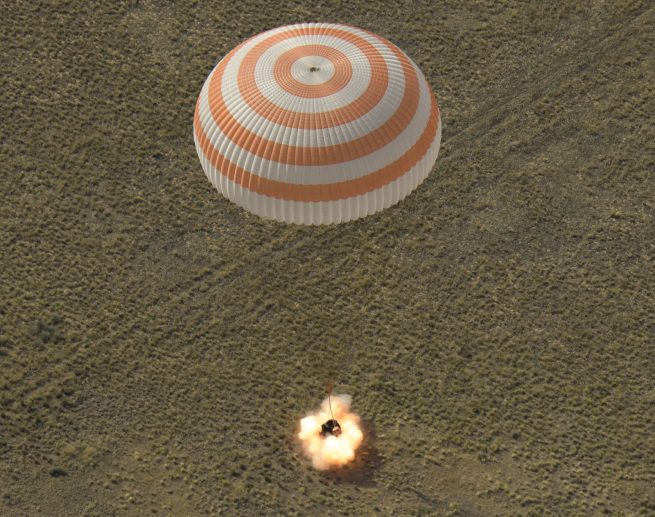 The Soyuz MS-11 capsule ignited its soft landing jets about a meter off the ground to cushion the impact. Photo Credit: Bill Ingalls / NASA

For comparison, the person with the most time spent in space is retired Russian cosmonaut Gennady Padalka at 878 days over five missions.

“Bye bye, see you soon guys,” Kononenko said moments after the Soyuz separated from the ISS.

Remaining aboard the ISS are Russian cosmonaut Aleksey Ovchinin and NASA astronauts Nick Hague and Christina Koch. Upon the undocking of Soyuz MS-11, they formally began the Expedition 60 mission, which is slated to last until early October.

The burn occurred at about 10 p.m. EDT (02:00 GMT) and culminated in the safe parachute-assisted landing some 50 minutes later some 90 miles (140 kilometers) southeast of Dzhezkazgan, Kazakhstan. 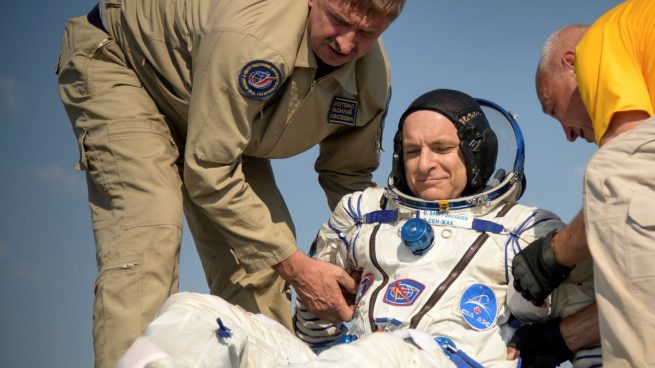 Less than 30 minutes after their touchdown, the trio was recovered by Russian search and recovery teams. Upon the Soyuz hatch opening, the three space flyers were treated to their first fresh air in more than 200 days. The temperature at the landing area was roughly 71 degrees Fahrenheit (21 degrees Celsius) with a slight breeze.

After being extracted from the capsule, they were each placed in nearby couches to rest as their body begins the long process to re-adjust to Earth’s gravity. After a few minutes, they were moved to an inflatable medical tent to remove their Sokol launch and entry suits before being flown by helicopter to Karaganda, the capital of Kazakhstan.

Once their, they parted ways. Kononenko was flown back to Russia while McClain and Saint-Jacques began an 18-hour flight to Houston.