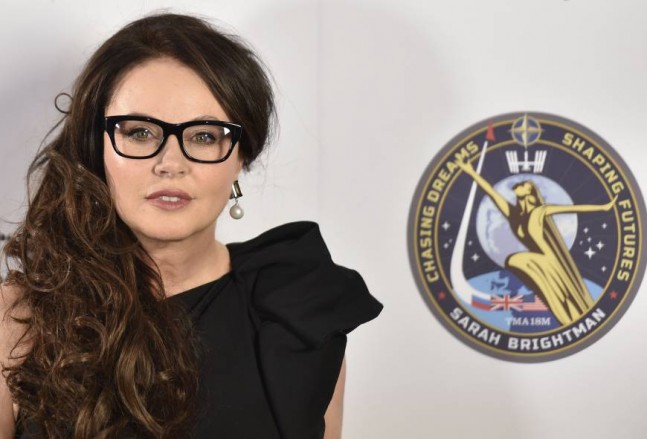 Sarah Brightman poses for photographs after speaking about her travel to the International Space Station, at a news conference in central London. Photo Credit: Reuters

Brightman has paid Space Adventures company $52 million to fly to the ISS, and hoped to become the first singer ever to perform a concert in space. She would have been the second female space tourist to visit the space station. Brightman was assigned to Soyuz TMA-18M, along with Russian cosmonaut Sergey Volkov and ESA astronaut Andreas Mogensen. The spacecraft is scheduled for launch from the Baikonur Cosmodrome in Kazakhstan.

She was learning Russian and survival skills as part of her training with cosmonauts and astronauts from NASA, the Russian space agency Roscosmos and the Japanese space agency JAXA. “Since 2012, Sarah has shared her story of a lifelong dream to fly to space. Her international fame as the world’s best-selling soprano has enabled her message to circle the globe, inspiring others to pursue their own dreams,” said Eric Anderson, co-founder and chairman of Space Adventures, in the statement. “We’ve seen firsthand her dedication to every aspect of her spaceflight training and to date, has passed all of her training and medical tests. We applaud her determination and we’ll continue to support her as she pursues a future spaceflight opportunity.”

Brightman expressed her extreme gratitude to Roscosmos, Energia, Gagarin Cosmonaut Training Center (GCTC), Star City, NASA, and all the cosmonauts and astronauts, for their support during this “exciting time in her life.”

But the head of the GCTC declined to comment on Brightman’s decision, saying the center had not received the official refusal so far.

Russian news agency TASS reported that the withdrawal will not affect the flight of Soyuz TMA-18M.

“This will not affect the launch of Soyuz. The scheduled date of Sept. 1 is in place,” a source from the Russian space industry said.

Instead of the singer, Russian cosmonaut Sergey Prokopyev or another young cosmonaut may fly to the ISS if no new space tourist shows up in the coming days.

“The Space Adventures company has just several days or a week left to find another tourist. Otherwise, [any one] of [the] young cosmonauts who have not traveled into space will be sent on [the] flight, for example, Prokopyev,” TASS wrote.

Another source said that the vacant seat should not be occupied due to the loss of Progress M-27M cargo ship. This will allow delivering to the orbit and then taking back to the Earth some 100 kg of cargo.