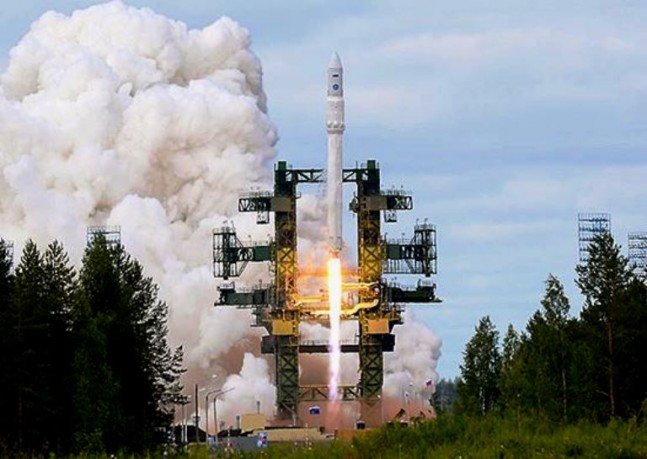 At the start of 2014, NASA announced its support for an extension of the International Space Station (ISS) program until at least 2024. Recent news out of Russia, however, suggests that at least one ISS partner may view that date as the end of the line – if not even sooner.

The Russian media has run several stories recently insinuating that the long-dormant Space Race may be heating up once again. The Russian Federal Space Agency’s (Roscosmos) national space strategy has for some time hoped to put cosmonauts on the Moon. Until now, though, such statements were largely empty gestures without funding to support them. Lately, a number of developments signal a growing seriousness towards finally putting Russians on the lunar surface, even including speculation about a long-term Russian presence on or near the Moon.

In April 2009, Russia announced plans to develop a successor to the incredibly resilient Soyuz capsule. At the time, plans called for three variants: one for unmanned launches, one for low-Earth orbit (LEO), and one for lunar missions. The unmanned variant was envisioned to carry about two metric tons of material into orbit, and return with 1,102 lbs (500 kg). The LEO version would carry a crew of six, while the lunar alternative would have room for four. At the time, Roscosmos was considering the possibility of a reusable crew capsule, and rumors were circulating regarding the construction of a Lunar Orbital Station. It was later announced that RKK Energia would lead the contract on the vehicle’s construction, known as the Prospective Piloted Transport System (PPTS). The venerable Soyuz launch system has been tapped to send the first of the Sentinels on its way into the black of space. Photo Credit: S. Corvaja / ESA

Five years after the initial public notification, the Russian space agency is making a bid for six billion USD to help make a lunar mission a success. For the time being, Roscosmos has been largely silent on the spacecraft, making it difficult to gauge its progress. We do, however, know a little more about the rocket upon which it is set to launch.

Around the time that the PPTS was made public, Russia similarly announced it was looking to design a follow-on to the Soyuz rocket. Dubbed the Rus-M, this Soyuz inspired successor was scrubbed only two years later when plans on a European-Russian joint venture fell through. One year after that, in 2012, it was reported that the as-yet incomplete Angara rocket was the likely contender for PPTS launches.

The Angara rocket was originally intended to replace a host of small and medium-sized launch vehicles, partially as a means of bringing all major components of the Russian launch industry within the country’s post-Soviet borders. It was, until the announcement in 2012, being considered exclusively for unmanned missions. Set for its maiden test launch this past June, Angara initially failed to make it off the launch pad as Russian President Vladimir Putin watched from the Kremlin. A few weeks later, it successfully accomplished its first launch.

Speculation that all this means an end to Russian participation in the ISS is based on two factors: the Russian launch schedule and Roscosmos’ strategic objectives.

Russia Beyond the Headlines reported last week that, between 2021 to 2023, Russia intends to conduct one launch of its new spacecraft every year to the ISS. In 2024, it would conclude with a manned mission to the ISS. The following year, a heavier variant will begin testing. Alongside this launch schedule, planning documents from Roscosmos show a request for $55 million to complete technical specifications for a manned lunar base by 2024.

For now, however, we can only speculate how these objectives will shape Russian involvement in the ISS past its current end date. The nature of that involvement will no doubt rest in part on the success or failure of Russia’s ambitious development programs.

For their part, the United States’ space agency has no official plans for the Moon, with President Barack Obama summarizing his administration’s views in 2010 as, “We’ve been there…”. Meanwhile, the European and Japanese space agencies have expressed interest in escaping LEO and contributing to missions beyond Earth’s gravitational sphere of influence.

The views expressed in this commentary are solely those of the author and do not necessarily reflect those of The SpaceFlight Group.

Two big items of interest here. The planned cargo-only Soyus/Progress successor will join SpaceX’s cargo Dragon in being able to return significant masses of material from ISS to Earth – sort of a Progress with heat shield. If the Russians have some moderately massive items they would like to take with them before leaving the ISS for good, this would be a good capability to have. Thus, this news is at least a mildly favorable contribution toward the author’s thesis that Russia may be planning an exit from ISS around 2024.

What surprised me most was the revelation that as recently as a week ago the Russians were publicly describing their future space plans in terms of staying on ISS as long as that. Earlier comments by Commissar Rogozin all but declared the intention of a Russian ISS bug-out by 2020 if not sooner. So this has to be considered good news for friends of ISS; there seems to be some reason for hope that Russia will – all other considerations aside – eventually officially endorse staying on ISS for at least as long as the Obama administration’s guarantee of American presence there. Russia isn’t exactly famous for keeping promises, but the fact that something as unequivocal as this has appeared in an organ of the currently very tightly controlled Russian press may be a way to hint at a walk-back of Rogozin’s earlier bluster anent ISS.

That also may be why a pair of RD-180’s showed up on ULA’s doorstep last week despite considerable tensions with Russia over Ukraine. The Angara uses the RD-191 engine. This is an engine that uses either the same or a very similar powerhead as that of the RD-180 but has only a single combustion chamber and nozzle instead of the RD-180’s two and produces half the thrust. Both the RD-180 and RD-191, in turn, are variants of the four-chamber-and-nozzle RD-170 that was developed to power the Energia booster which launched the Soviet Buran Shuttle-like vehicle.

All engines in this series are, so far as I know, made in the same RPO Energomash plant. It probably makes each variant cheaper to produce as many of each as possible as they seem to have a high commonality of parts. ULA is good for as many as eight RD-180’s per year under the current contract. It may be awhile before Russian domestic consumption of RD-191’s for Angara reaches this level. So RD-180’s may keep showing up on ULA’s loading dock for awhile.

If Russia is successful in moving most launches over to Angara in the next year or two, as they apparently intend, there may come a time when Russia will covet the RD-180’s share of the Energomash factory’s capacity for producing more RD-191’s instead. As Russia never fails to do what it sees as being in its best interests, ULA may face a cutoff or a strong-armed price increase at such a time. Russia’s space plans are going to be expensive and that country may find that the future isn’t as flush as the present. As with crew rides to ISS, ULA, if it continues to rely on the RD-180, may find itself in a situation similar to NASA’s even if Russia never actually cuts off RD-180 shipments.

Russia can reach moon.Russia will reach mars before USA does.India and ISRO will be second to reach mars