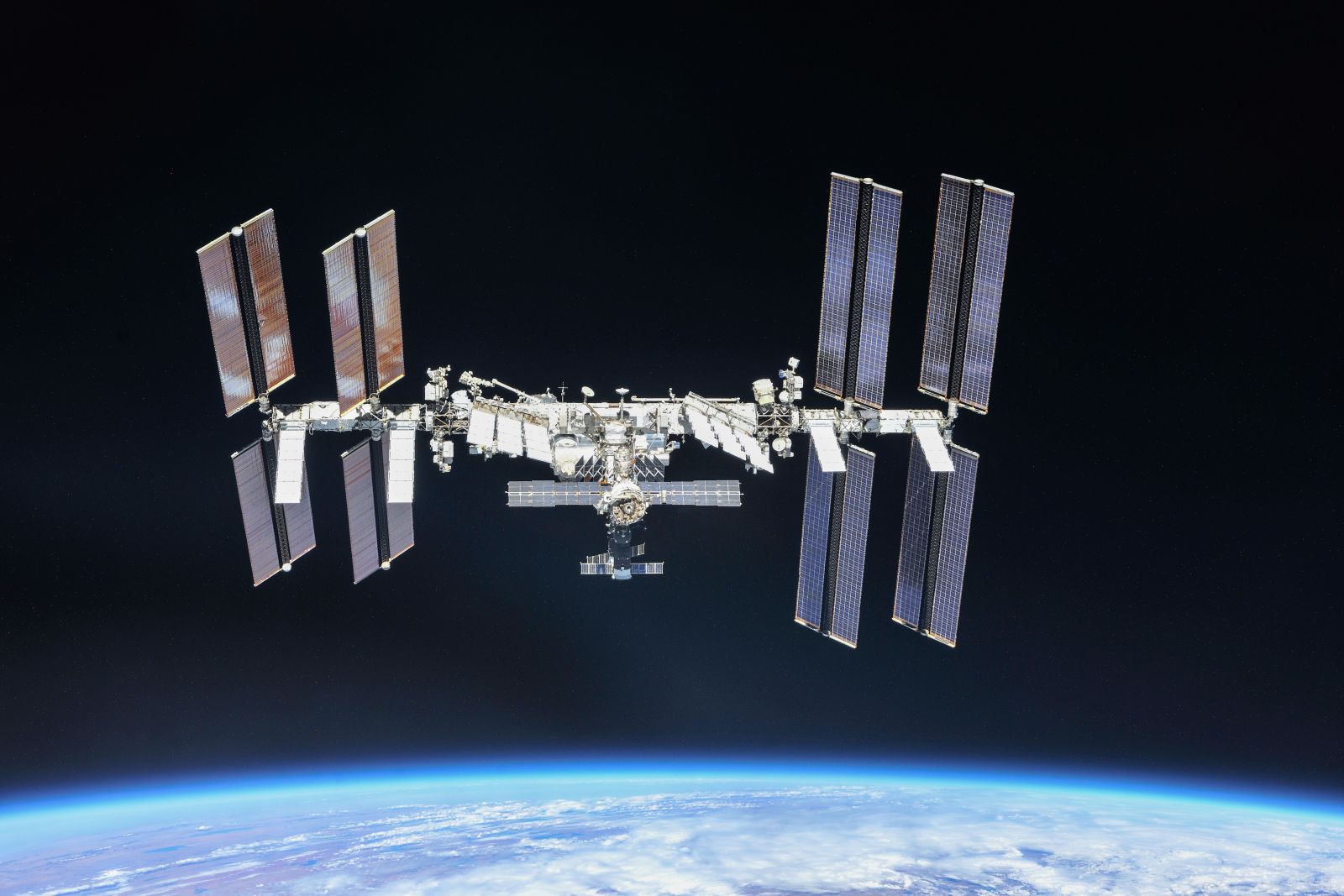 The crew of the International Space Station had to shelter in place on Nov. 15, 2021, because of debris created by a Russian anti-satellite missile test. While the crew is safe, normal activities are not expected to resume until at least Nov. 16. Credit: NASA/Roscosmos

Days after the four Crew-3 Dragon astronauts arrived at the International Space Station, the seven-person Expedition 66 crew was forced to shelter in place as the outpost passed near a debris field produced from an anti-satellite test.

Multiple times over the course of the day, Nov. 15, 2021, the ISS passed near the debris field from a recent Russian anti-satellite missile test. This prompted the station astronauts to close many of the hatches between modules, mainly the axial modules, just in case a debris strike caused depressurization. The ISS and its crew are currently safe and no collisions have been reported. 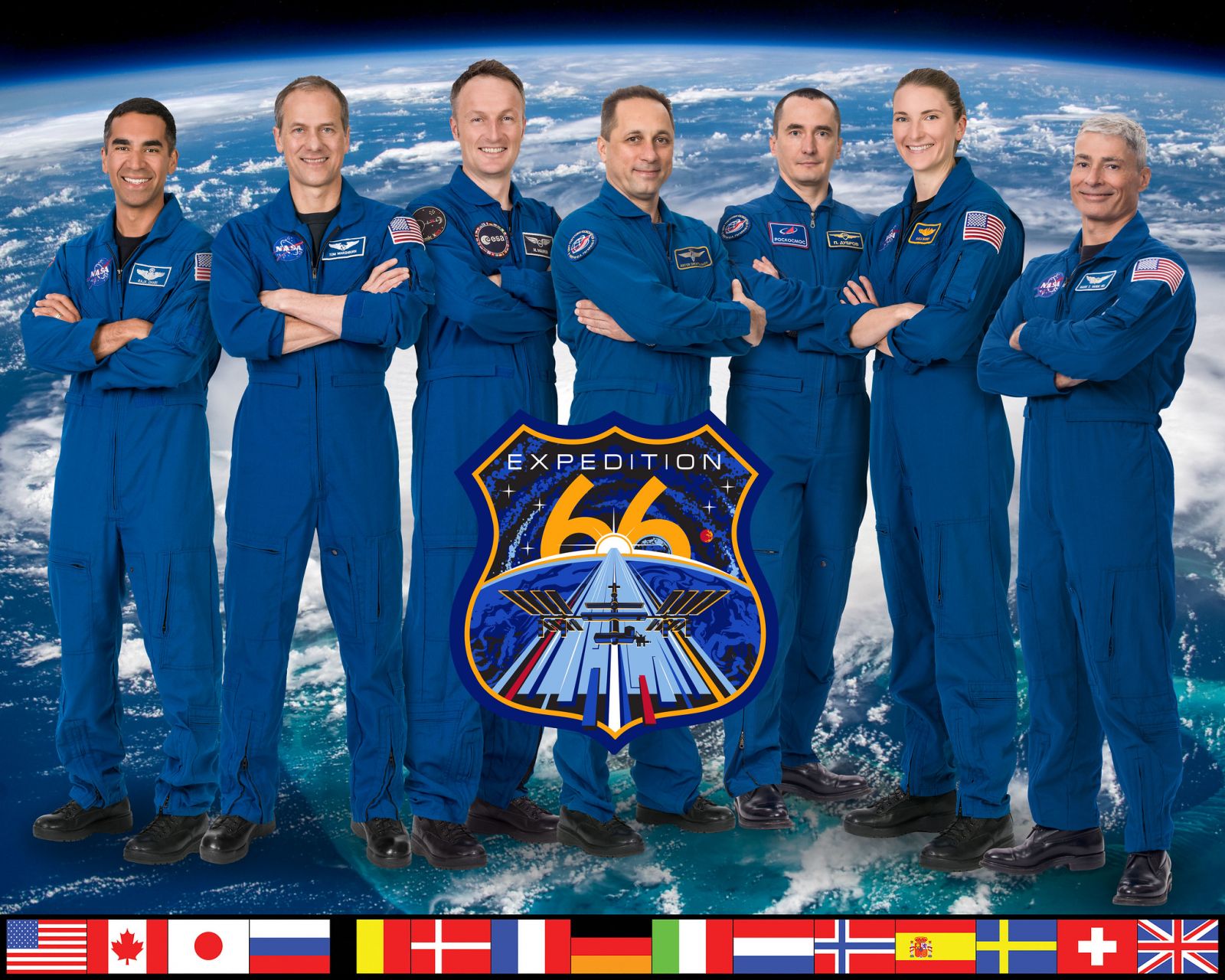 Shkaplerov launched to the ISS in the Russian Soyuz MS-19 in October. Dubrov and Vande Hei have been at the ISS since April and are expected to return to Earth in March in Soyuz MS-19 with Shkaplerov.

The debris likely came from Kosmos-1408, a defunct Soviet satellite launched in 1982 that has been dead for decades. At the time of the direct-ascent missile test, the satellite was in an orbit of roughly 400 miles (645 kilometers) in an inclination of about 82 degrees relative to the equator. The now-destroyed spacecraft had a mass of around 2,000 kilograms.

“We are actively working to characterize the debris field and will continue to ensure all space-faring nations have the information necessary to maneuver satellites if impacted,” the Pentagon said in a statement, confirming the event. “We are also in the process of working with the interagency, including the State Department and NASA, concerning these reports and will provide an update in the near future.”

While the statement made no mention of Russia, CNN space correspondent Kristin Fisher tweeted that two U.S. officials confirmed that a Russian anti-satellite test took place over the weekend, generating the debris event.

“What the Russian’s did today with these 1,500 pieces of trackable orbital debris poses a risk not only to those astronauts [aboard the ISS], not only to those cosmonauts [aboard the ISS], but to satellites to the interests of all nations,” said State Department spokesperson Ned Price. “Russia’s dangerous and irresponsible behavior jeopardizes the long term sustainability of outer space, and clearly demonstrates that Russia’s claims of opposing the weaponization of space are disingenuous and hypocritical. The United States will work with our allies and partners to respond to Russia’s irresponsible act.” 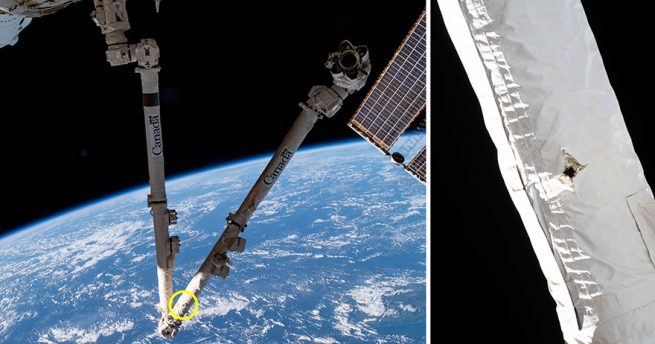 During a routine inspection in May 2021, it was discovered that the space station’s robotic arm, called Canadarm2, was struck by a piece of space debris. While this strike didn’t effect the performance of the device, even an small hit on a critical pieces of equipment could cripple the ISS. The recent Russian anti-satellite test only adds to the increasing amount of space debris in low Earth orbit. Credit: NASA/CSA

Before the ISS crew entered their sleep period (around 1 p.m. EST / 18:00 UTC), NASA’s Mission Control Center in Houston gave the astronauts a final brief, stating that the closed hatches are to remain closed through at least tomorrow as the ISS is expected to pass through the debris field several times over the next day.

The ISS does have thrusters that can be used, and likely will be used, to alter the outpost’s orbit to avoid potential debris, but this usually takes time and planning.

According to New York Times space reporter Joey Roulette, U.S. Space Command is tracking more than a thousand pieces of new debris from the anti-satellite test, with thousands more that are too small to track.

Roscosmos, the Russian state-run space corporation, only acknowledged the ISS crew had to shelter in place due to an “object” coming close to the space station, but made no mention of a debris field or the suspected anti-satellite test.

“The orbit of the object, which forced the crew today to move into spacecraft according to standard procedures, has moved away from the ISS orbit,” Roscosmos tweeted about the matter. “The station is in the green zone.”

The outpost is still occasionally dodging debris created from the 2007 Chinese anti-satellite test, and likely will for the rest of its service life.