For launch, the four liquid-fueled boosters—collectively called the first stage—and the core—called the second stage—fired at the same time to leave the pad. The boosters each utilize an RD-107A engine while the core sports an RD-108A. 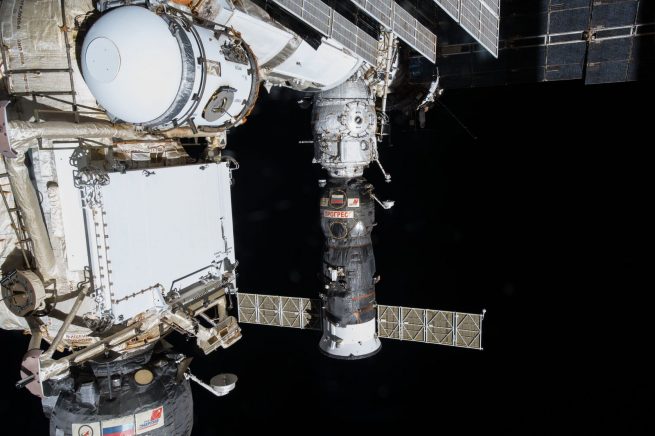 The first stage boosters burned for about two minutes before separating and falling away. The second stage continued firing for an additional three minutes before consuming its fuel.

Moments before the second stage was jettisoned, the third stage fired its RD-0110 engine in a process called hot staging. As there is constant acceleration, this ensures the fuel in the third stage doesn’t slosh, potentially producing gas pockets that could enter the turbopump before the engine ignites.

Once the second stage fell away, the third stage continued burning for the duration of the flight into orbit, cutting off some nine minutes after leaving Kazakhstan.

Seconds later, Progress MS-12 was detached and flying free. It’s antenna’s and solar panels deployed a few moments later as the spacecraft began its trek to the ISS.

Docking with the space station’s Pirs module occurred just 3.5 hours later, marking the third time this super-fast-track rendezvous profile was utilized. The first time was in July 2018 with Progress MS-09. At some point, it is hoped crewed Soyuz flights will fly the same profile.

This comes just two days after Progress MS-11 departed the ISS from the same docking port after a four-month stay.

Monitoring the automated docking from inside the ISS were Russian cosmonauts Aleksey Ovchinin and Aleksandr Skvortsov. Were it needed, they could have taken over control of the spacecraft remotely from a manual docking system in the Zvezda module called TORU.

Progress MS-12 is slated to remain aboard the ISS until December 2019. At the end of its mission, it will be loaded with trash and unneeded equipment before being undocked and commanded to de-orbit and burn up in the atmosphere over the southern Pacific Ocean near an area called Point Nemo. Sometimes called the “spacecraft cemetery,” this is an area in the ocean that is the farthest from land—some 2,600 kilometers—and has relatively little maritime traffic.

Cygnus set to depart next week

With Progress MS-12 securely attached to the ISS, the next visiting vehicle event is expected to be the departure of the NG-11 Cygnus spacecraft, which has been berthed to the Earth-facing port of the Unity module since April. It’s slated to be unberthed and released on Aug. 6.

The unpiloted Cygnus cargo ship is then expected to remain in orbit for a five-month secondary free-flight mission lasting before re-entering Earth’s atmosphere to burn up. This duration test is expected to accomplish a number of items for Northrop Grumman, the spacecraft’s operator. 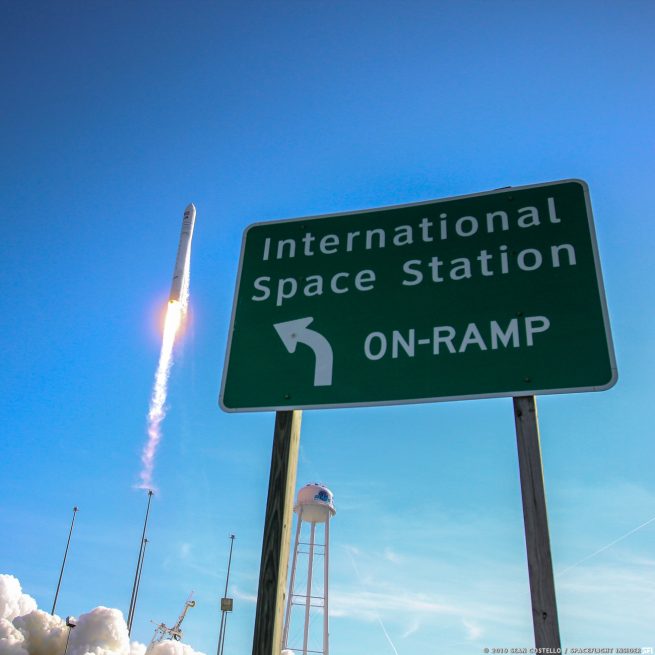 In addition to testing a number of new systems, the free-flight mission is expected to showcase the spacecraft can remain in orbit for longer periods of time. It should also demonstrate that teams at Northrop Grumman can operate two Cygnus vehicles at the same time as the NG-12 mission is planned to launch in October.

This is of importance to both Northrop Grumman and NASA as the U.S. Space Agency recently announced plans to award the company a sole-source contract for a Cygnus-based “minimal habitation module” to be part of the planned Lunar Gateway outpost by 2024.

This minimal habitation module would be launched via a commercial rocket before traveling to a near-rectilinear halo orbit around the Moon where a “power and propulsion element”—to be built by Maxar Technologies—is expected to be waiting.

In addition to being a crew cabin for the Lunar Gateway, it will also include a total of four docking ports—two axial and two radial. The radial ports are expected to allow for the docking of resupply spacecraft and human-rated lunar landers.

NASA said it believes Northrop Grumman is the only company with the ability to design, build and launch a habitat to complete the “phase one” Lunar Gateway in time to support the Artemis 3 mission sometime in 2024, which could see the first human landing on the Moon since December of 1972.

The Soyuz 2.1a is a three-stage rocket roughly 150 feet (46 meters) tall and is powered by several engines consuming liquid oxygen and rocket grade kerosene.