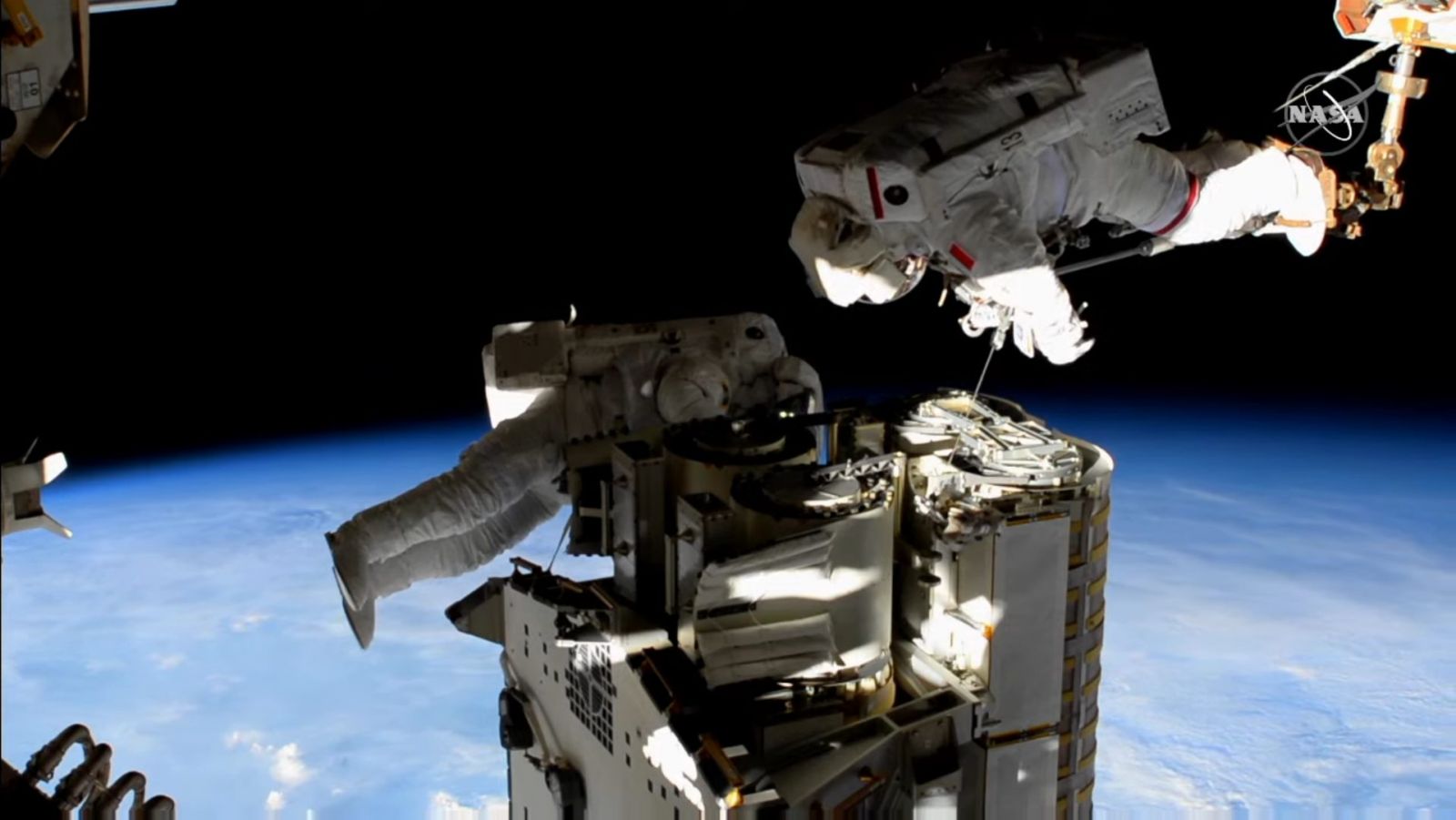 A spacesuit glitch and an alignment issue prevented two astronauts from fully installing the new roll-out solar array on the exterior of the International Space Station. 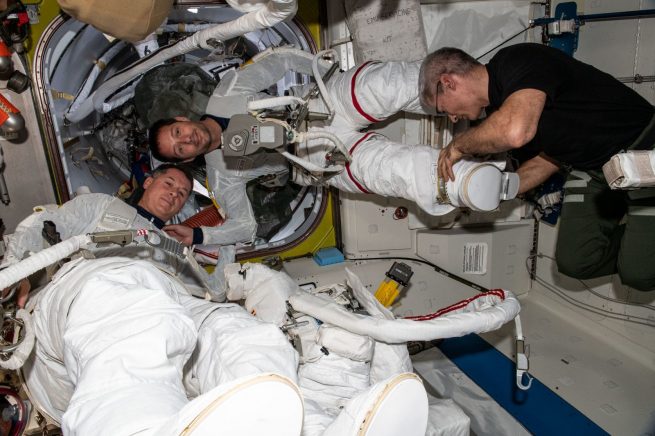 About mid-way through the 7-hour, 15-minute outing, Kimbrough noticed the display on the Displays and Control Module on his suit appeared to be off, requiring him to return to the Quest airlock to perform a “warm restart.” While this issue was resolved, it burned through nearly 45 minutes, time that could have been used to troubleshoot an alignment issue with the iROSA that later cropped up once the two astronauts began installing it on the P6 truss.

The iROSA devices were brought to the ISS earlier this month when SpaceX’s CRS-22 Dragon cargo spacecraft arrived at the outpost. They are the first two of six planned to be sent to the outpost over a total of three resupply flights and are designed to augment the orbiting laboratory’s existing solar arrays.

When the space station was assembled in the 2000s, it included eight massive 12-meter (39-foot) by 115-foot (35-meter) solar array wings on several outbound truss segments. The oldest two of these are located on the P6 truss, which was launched in December of 2000.

The original arrays were given an on-orbit life of about 15 years. According to NASA, the harsh environment of space slowly degrades the solar cells on the arrays over time and collectively they are currently generating up to 160 kilowatts of power.

Once all six arrays are deployed power production is expected to be boosted to about 215 kilowatts, according to NASA.

The location of the six iROSA devices that are expected to be installed within the next several years. Credit: NASA

Each iROSA will be installed on the mast canister of an existing array and be angled 10 degrees from the original blankets. While the new arrays will shadow some of the cells of the original, combined it’ll produce more than the original array did when it was new.

When rolled up and folded in half, a pair can fit into the trunk of a Dragon spacecraft. Once installed and extended, they’ll measure 20 feet (6 meters) wide and 60 feet (19 meters) long.

Two other pairs of iROSAs are expected to be delivered on future cargo Dragon spacecraft in 2022. 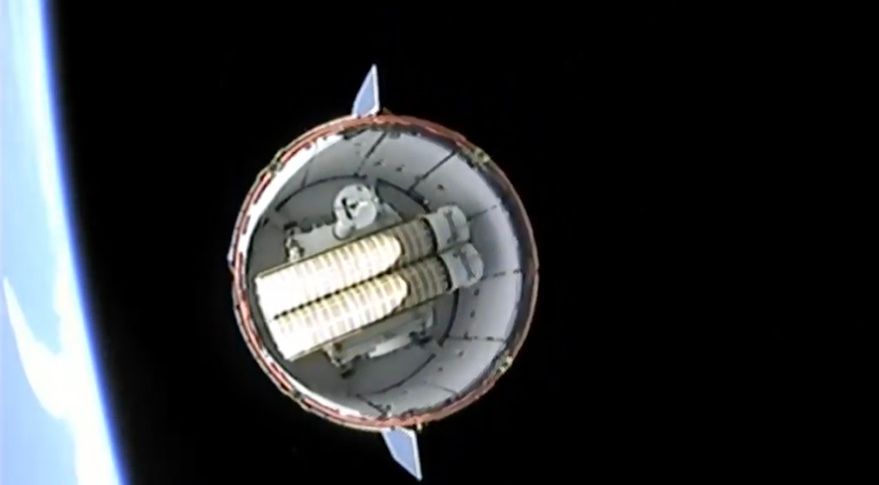 Once the duo exited the Quest airlock, Pesquet and Kimbrough moved to the staging point where the two iROSA devices were located, near to where the arrays are to be installed.

According to NASA, each iROSA device is 750 pounds (340 kilograms). To move it from its launch carrier, it required Pesquet to release several bolts before he had to connect a foot restraint to the Canadarm2 robotic arm in order to get into a position to grab and move the roll-out array.

Once Pesquet was in position to hold the iROSA, Kimbrough was expected to release the final bolt, allowing the array to move free.

However, it was at this point, around three hours into the spacewalk, that Kimbrough noticed his Displays and Control Module on the front of his suit appeared to be off, requiring ground teams to troubleshoot the issue.

The Displays and Control Module contains all the controls, a digital display and is the location for external liquid, gas and electrical interfaces, according to NASA. It’s essentially a control panel for the space suit.

An overview of the Extravehicular Mobility Unit. Video courtesy of Orbital Velocity

Ultimately, ground teams instructed Kimbrough to return to the airlock in order to perform a “warm restart” on the device. This seemed to resolve the issue, but engineers still needed to troubleshoot another issue that occurred earlier in the spacewalk, data spikes in the reading for pressure in his suit’s sublimator, which NASA said provides cooling for the astronaut.

NASA said Kimbrough was never in any danger and teams on the ground wanted to ensure everything was safe. Ultimately the data spikes stabilized and Kimbrough was given the “go” to return to the work area to proceed with iROSA installation. 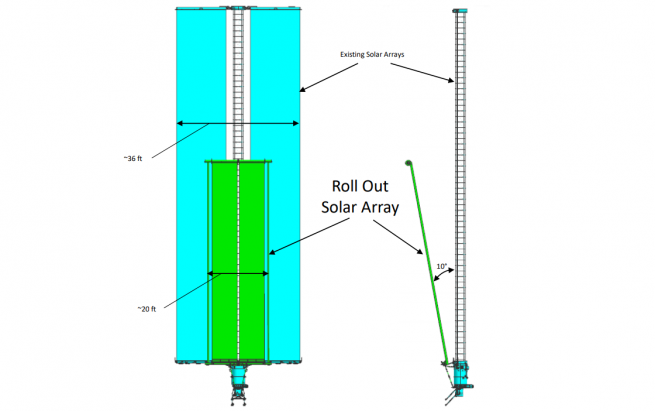 A diagram of how each iROSA will be positioned over the original solar array wings. Credit: NASA

However, by this point some 45 minutes had passed.

Once Kimbrough returned to the work area, he released the final bolt holding the first iROSA to its carrier and Pesquet could then have the arm, controlled by an astronaut inside the ISS, move him as close as it could reach to the final installation location.

Since the arm can’t reach all the way to the end of P6, this required Kimbrough to get into position to take iROSA from Pesquet as soon as he arrived about mid-way down the P6 truss.

Pesquet was then moved back to his starting location in order to get off the arm and take his foot restraint to the end of P6 before taking iROSA from Kimbrough.

The two then worked together to attach iROSA to the mod kit on the mast canister for the solar array on the 2B power channel.

The next step was to rotate and unfold iROSA. However, there was an interference issue that prevented the duo from locking it into place.

At around six hours into the outing, the spacewalk was running well behind schedule at this point. As such, the two were instructed to refold the device and bolt it in place, putting it in a safe configuration to wait for a future spacewalk.

The astronauts then took pictures of the iROSA to allow ground teams to study the interference issue.

Had the array been unfolded as originally planned, the next step would have been for the iROSA to be unrolled to its full extent with it being connected to the space station’s power system.

It’s unclear if that will happen on the next spacewalk, originally scheduled for Sunday, June 20, or if the second iROSA will be installed on the other P6 solar array wing’s mast canister.

Once the work area was cleaned up, Pesquet and Kimbrough made their way back to Quest to conclude the spacewalk. After the hatch was closed, repressurization began, officially ending the outing at 3:26 p.m. EDT (19:26 UTC).

Today’s spacewalk was the 239th in support of ISS assembly and maintenance since 1998 and the seventh so far this year, including a Russian spacewalk two weeks ago.

In total, astronauts and cosmonauts have spent 62 days, 18 hours and 28 minutes outside the outpost.

An animation showcasing the original plan for U.S. EVA-74. Video courtesy of NASA