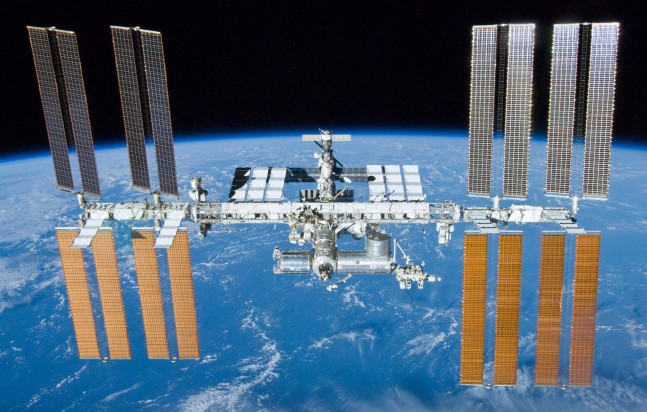 Expedition 42 crew members are safe inside the Russian segment of the International Space Station following concerns about a possible ammonia leak detected early in the morning, around 4 a.m. EST (0900 GMT), on Wednesday Jan. 14. Further analysis indicated that the incident this morning was a false alarm, and ground teams are working to get the crew transitioned back to the U.S. segment of the orbiting laboratory.

In the early morning hours of Jan. 14, flight controllers at NASA’s Johnson Space Center Mission Control, located in Houston, Texas detected a rise in pressure in the station’s water loop for the thermal control system B, indicative of an ammonia leak. Ammonia is an extremely hazardous chemical, and, as such, ground teams acted quickly to ensure the crew on station was safe. All six astronauts are currently co-habitating on the Russian side, until ground control deems the U.S. is safe. Photo Credit: NASA

NASA astronaut Barry “Butch” Wilmore, Terry Virts, and European Space Agency (ESA ) astronaut Samantha Cristoforetti were directed to isolate themselves in the Russian segment, while the ground crew investigated the potential leak. Non-essential equipment in the U.S. segment of the station was also powered down per established procedures.

International Space Station Program Manager, Mike Suffredini, stated: “There was never any risk to the crew. We were watching the data trying not to isolate them, but had to isolate them twice. Butch called down and said ground crews were great, reacted quickly and appropriately.”

The U.S. and Russian sections of the ISS use separate cooling systems, so for now, the crew is a bit cramped but has plenty of supplies to support all six astronauts and is doing what they can from that segment. Despite indications of a false alarm, the trio may not be able to go back into the U.S. segment tonight. There are protocols that need to be followed in a specific order to properly power up and check systems and those protocols take time. The Multiplexer DeMultiplexer (MDM) on station is a backup computer system designed to relay commands to the station’s systems. Photo Credit: NASA

In the U.S. section of the roughly football field-sized outpost, water is circulated within loops, which serves to cool systems as the lab’s electronic system generate heat. As the water flows through these loops, it passed through heat exchangers which transfers heat to ammonia coolant.  The alarm that went off this morning, indicated that some of the ammonia coolant leaked into the water loop, which could ultimately find its way into the cabin itself.

After analyzing data, ground crews believe the root of the issue is a faulty sensor or an error with a data card in the Multiplexer DeMultiplexer (MDM ). The card contains important data that the ground crew needs to complete their investigation. Based on what data they have, the ground control team believes that the increase in pressure inside the cabin was due to the shutting down of certain non-essential systems this morning. NASA astronauts Terry Virts and Butch Wilmore venture into the US segment to collect air samples at 3:05 p.m. EST, and do not detect any ammonia. Photo Credit: NASA

Ground Control officials have a major task ahead of them today as they work to reconfigure the station’s systems, get the water loop back up and running, and try to recover data on the MDM cards. They are currently working through system powerups, and once they can get an inside peak at the ammonia accumulator and confirm the system is indeed tight as they believe it is, the crew will be able to return the U.S. segment.

Just a day ago, the trio started unpacking the newly-arrived SpaceX Dragon spacecraft, which was launched on Jan. 10 atop a Falcon 9 v1.1 rocket from Cape Canaveral Space Station in Florida. The crew were scheduled to begin working on a few experiments. The Micro-5 and Fruit Fly experiments have been unpacked and were scheduled to begin testing today. However, they will have to be put on hold until the crew can safely transition back to the U.S. portion of the station.

When asked about the research experiments on station and if they would be affected by this morning’s events, Suffredini said: “There will be no loss to research. Only a minor delay in starting some of the experiments. The freezer that houses a lot of the research had to be powered down, but [it] is designed to handle long power outages. It was down for about 8 hours and that is well within the time frame. All research experiments are OK.”