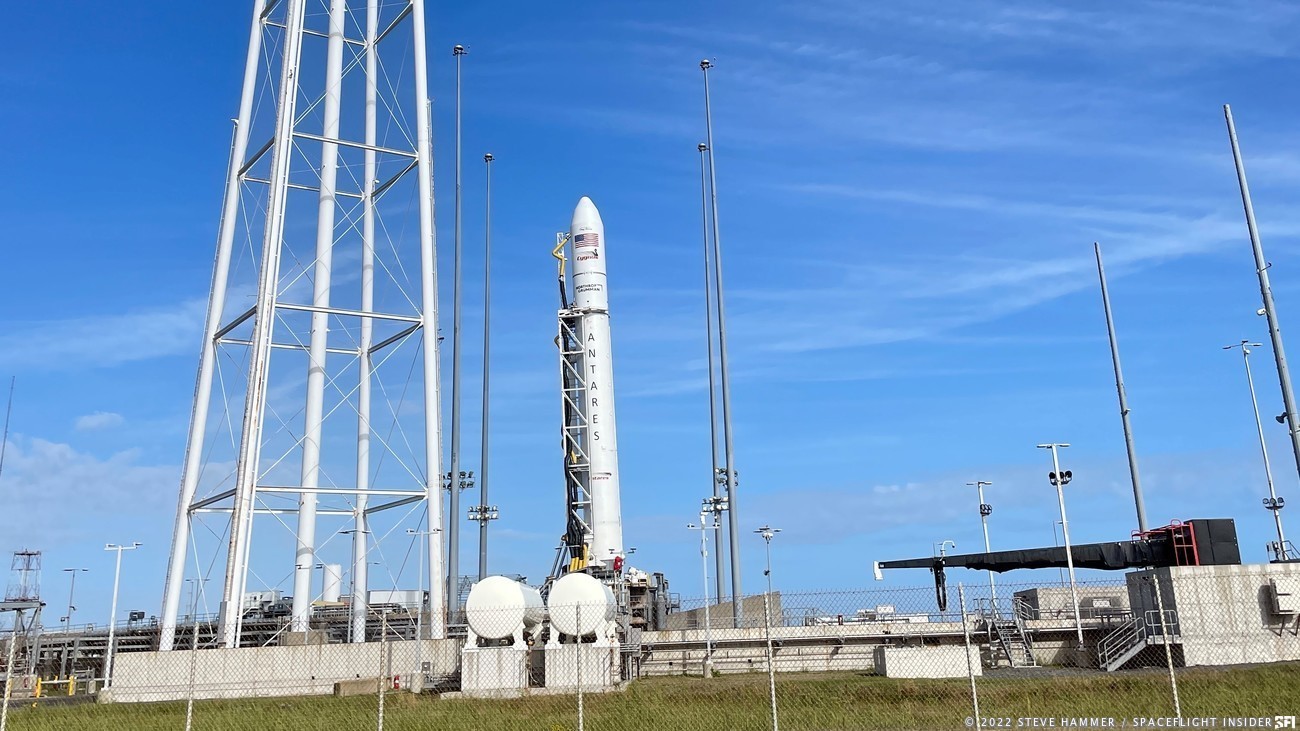 Northrop Grumman and NASA are set to fly the NG-18 Cygnus spacecraft to the International Space Station from Wallops Island, Virginia.

UPDATE: During the Nov. 6 launch attempt, a fire alarm at Northrop Grumman’s Cygnus control room in Dulles, Virginia, prompted a scrub roughly 15 minutes before the expected liftoff time. Teams are now setting up for a launch attempt at 5:37 a.m. EST (10:27 UTC) Nov. 7.

When it does launch, the NG-18 Cygnus spacecraft, dubbed SS Sally Ride, should take several days to reach the ISS before being captured by the robotic Canadarm2 and berthed to the outpost.

This launch is expected to be the first of two remaining Antares launches in the 230+ configuration. Due to Russia’s war in Ukraine, Northrop Grumman is unable to procure additional first stages and its engines. 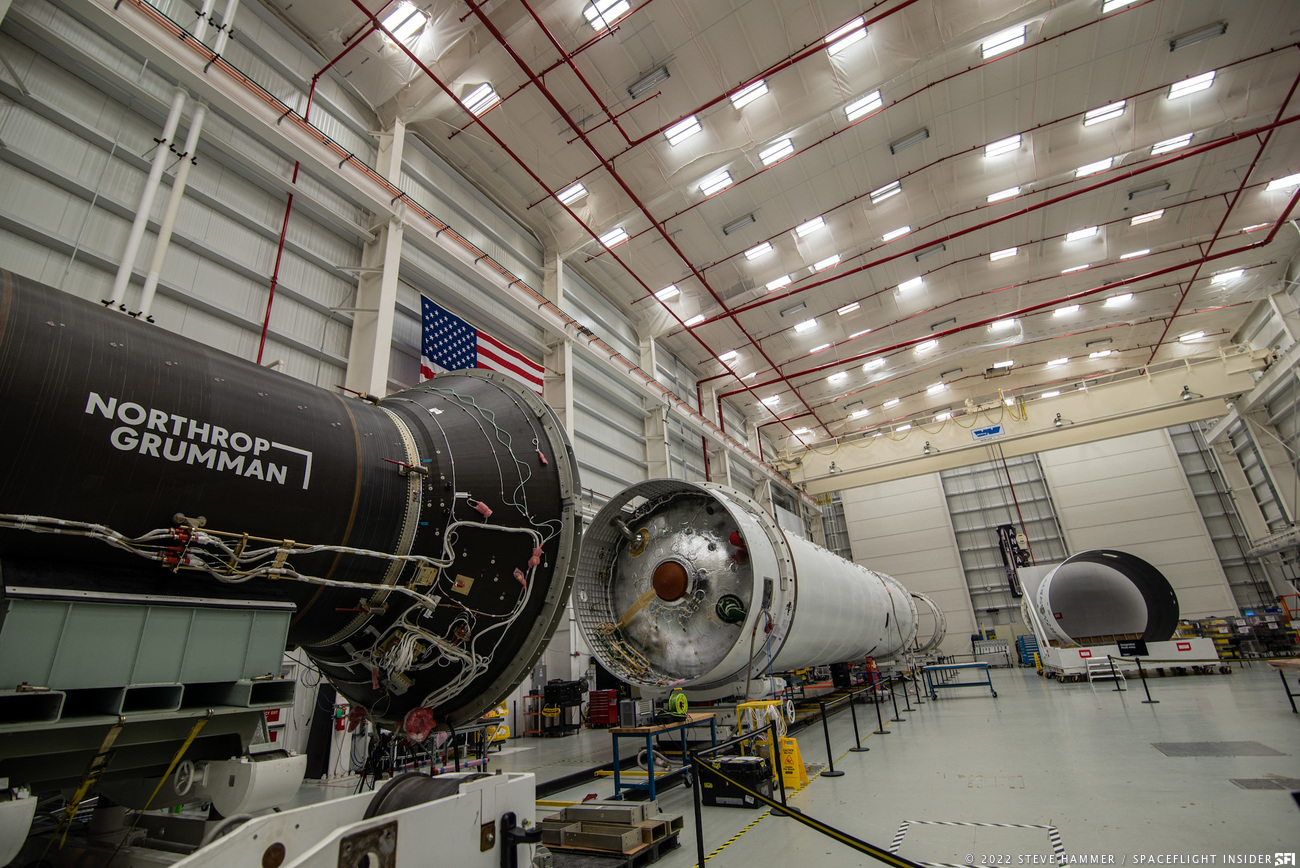 The final first stage for the Antares 230+ series, as well as the Castor 30XL upper stage, wait in their hangar for launch sometime next year. Credit: Steve Hammer / Spaceflight Insider

The first stage core structures and propellant systems of Antares 230+ are manufactured by Yuzhmash State Enterprise under the design authority of Yuzhnoye SDO in Dnipro, Ukraine. Additionally, the RD-181 engines used on the first stage are manufactured by the Russian company Energomash and the delivery of these has stopped as part of Russian sanctions against the United States.

In August, Northrop Grumman announced a partnership with Firefly Aerospace to build a new Antares first stage core. The new vehicle will be known as Antares 330 and is expected to utilize Firefly’s composite technology and seven Miranda engines on the first stage. This will expand on the two companies’ nearly year long relationship to build a new medium launch vehicle.

Both 230+ and 330 will use a Northrop Grumman Castor 30XL motor for the second stage. The Castor family of motors was originally developed in the late 1950s for the Scout and Little Joe programs, which also launched from Wallops. The 30XL uses a solid propellant and evolved from the heritage CASTOR 120 motor used on the Minotaur-C launch vehicles.

Northrop Grumman is honoring astronaut Sally Ride as it continues its tradition of naming the Cygnus spacecraft for pioneers in the aerospace industry.

In 1983, Ride became the first American woman astronaut serving on the crew of the second Challenger mission, STS-7. After a career with NASA she became a champion for diversity and worked to inspire girls and boys of all backgrounds to imagine themselves in careers in science, technology, engineering and math.

According to Associate Program Scientist for the International Space Station Program Heidi Parris, the NG-18 Cygnus payload will include nearly 1,800 pounds (800 kilograms) of hardware and samples to support about 40 different investigations, 20 of which are brand new studies.

In addition to the science, there are crew provisions and hardware for space station upgrades including support for installing new solar arrays. 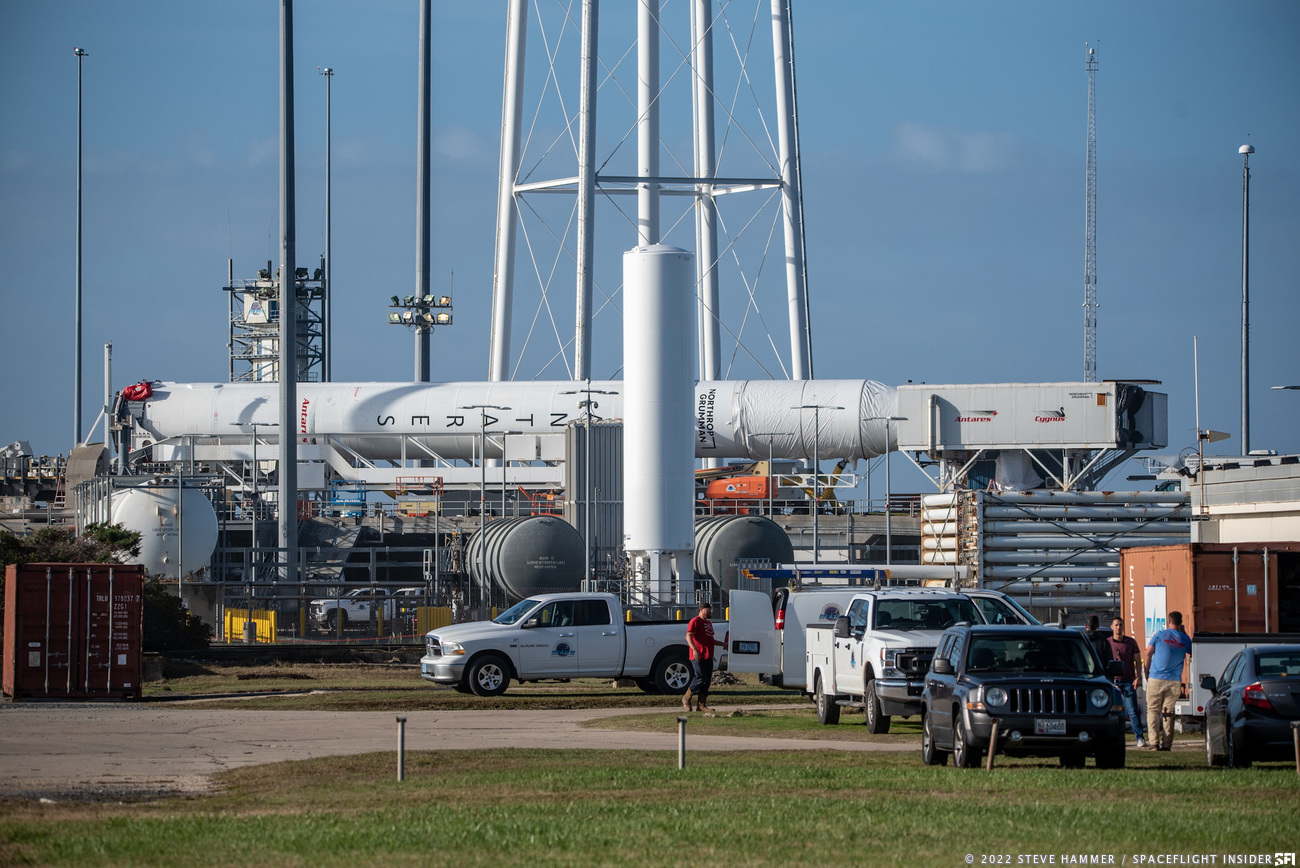 Antares sits in the horizontal position to allow last-minute items to be loaded into the Cygnus spacecraft. Credit: Steve Hammer / Spaceflight Insider

Some of the science going up are as follows:

Wildfires have been on the increase worldwide, resulting in damaging debris flows. These differ from normal mudflows in that they contain water repellent hydrophobic particles. Ingrid Tomac, an assistant professor in the University of California San Diego’s Structural Engineering Department explains, “We would like to better understand how the trapped air in post wildfire mud flows connects to sand particles,” and “removing gravity, therefore, could provide insights into the internal structure dynamics of these sand-water-air mixtures and a baseline for their behavior.”

The company Redwire is sending multiple devices and supplies to the ISS in preparation for bioprinting a human knee meniscus for the Uniformed Services University. Among the devices being sent are the newly improved Biofabrication Facility, which is a 3D printer that can manufacture human tissue in microgravity, and the Advanced Space Experiment Processor, which can be used to conduct a variety of life and physical science research and small-batch production. Additionally, the company will create organelles that can be used to test drug efficacy.

First satellites from Uganda and Zimbabwe

Birds-5 is a CubeSat constellation performing multispectral Earth observations using a commercially available camera. The constellation will consist of PEARLAFRICASAT-1, the first satellite developed by Uganda; ZIMSAT-1, Zimbabwe’s first satellite; and TAKA from Japan. These satellites will provide a wide range of land use data including information that may help predict debris flows.

This investigation involves a field of bioscience called epigenetics. Epigenetics is the study of how behaviors and the environment can cause changes that affect the way genes work. The study will look at the changes that take place in plants in space with the goal of observing changes over multiple generations of plants.

This is a study of how microgravity influences ovarian cell growth and maturation conducted by NASA and the Italian Space Agency. It will provide relevant information for future prolonged space settlements.

The launch of Antares will take place just a few hundred meters away from where the very first rockets were launched at the historic Wallops Island facility in 1945. This will mark Northrop Grumman’s 18th commercial resupply services mission for NASA.