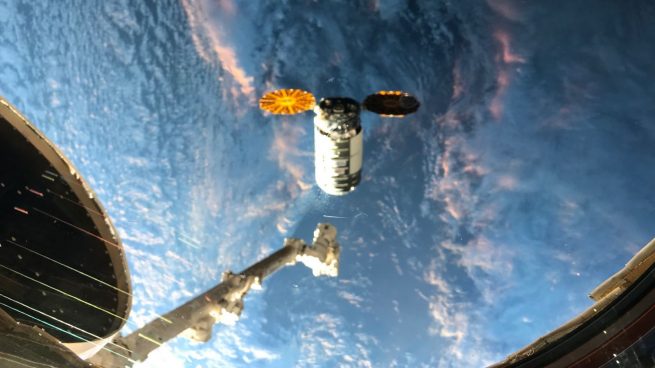 The NG-15 Cygnus spacecraft a few minutes before its capture by the robotic Canadarm2. Credit: Soichi Noguchi/JAXA

Two days after its launch atop an Antares rocket from Wallops Island, Virginia, the cargo craft rendezvoused with the orbiting outpost in the early-morning hours of Feb. 22, 2021. The unpiloted Cygnus spacecraft autonomously positioned itself some 10 meters beneath the Destiny Laboratory module, allowing ISS Flight Engineer Japan Aerospace Exploration Agency and Expedition 64 astronaut Soichi Noguchi to use the 17.6-meter-long robotic Canadarm2 to capture the vehicle at roughly 4:38 a.m. EST (09:38 UTC).

Noguchi was backed up by fellow crew member and NASA astronaut Mike Hopkins who congratulated the various teams that supported the NG-15 Cygnus mission, including Northrop Grumman, the European Space Agency, the Japan Aerospace Exploration Agency as well as NASA.

“You guys have kept the lifeline to station alive despite some very difficult challenges on the ground, and just like Katherine Johnson helped enable human spaceflight during her time at NASA, her namesake is continuing that today,” Hopkins said over the space-to-ground loop. “Well done everyone.” 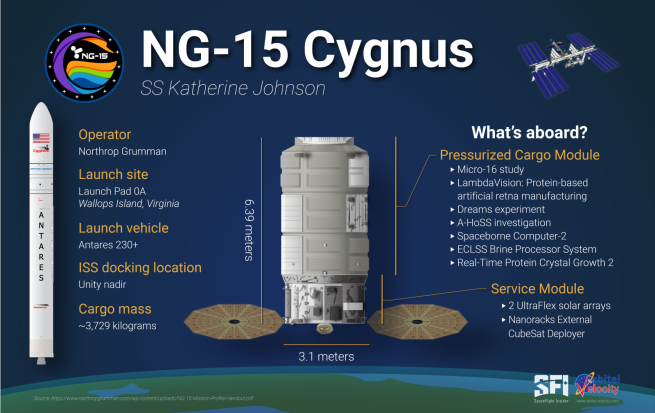 Johnson’s calculations were also instrumental in many of NASA’s early spaceflight missions, including those for the Apollo 11 Moon landing.

Following capture by Canadarm2, Earth-based robotics controllers commanded the remote manipulator system to move the Cygnus spacecraft to its berthing location on the Earth-facing port of the Unity module. It was securely bolted to the ISS at 7:16 a.m. EST (12:16 UTC).

Beginning as early as today, the hatches between Cygnus and the ISS are expected to be opened to allow the Expedition 64 crew to start to unload the spacecraft of its contents. Inside the spacecraft is some 3,700 kilograms of crew supplies and experiments.

These experiments include studies that aim to support future deep space exploration as well as those that’ll benefit us back on Earth! Other studies include an evaluation of sleep quality in astronauts, artificial retina manufacturing as well as a protein crystal growth experiment.

This cargo ship will remain berthed to the ISS for about three months before it’s loaded with trash and commanded to depart the outpost for an eventually destructive reentry into Earth’s atmosphere.