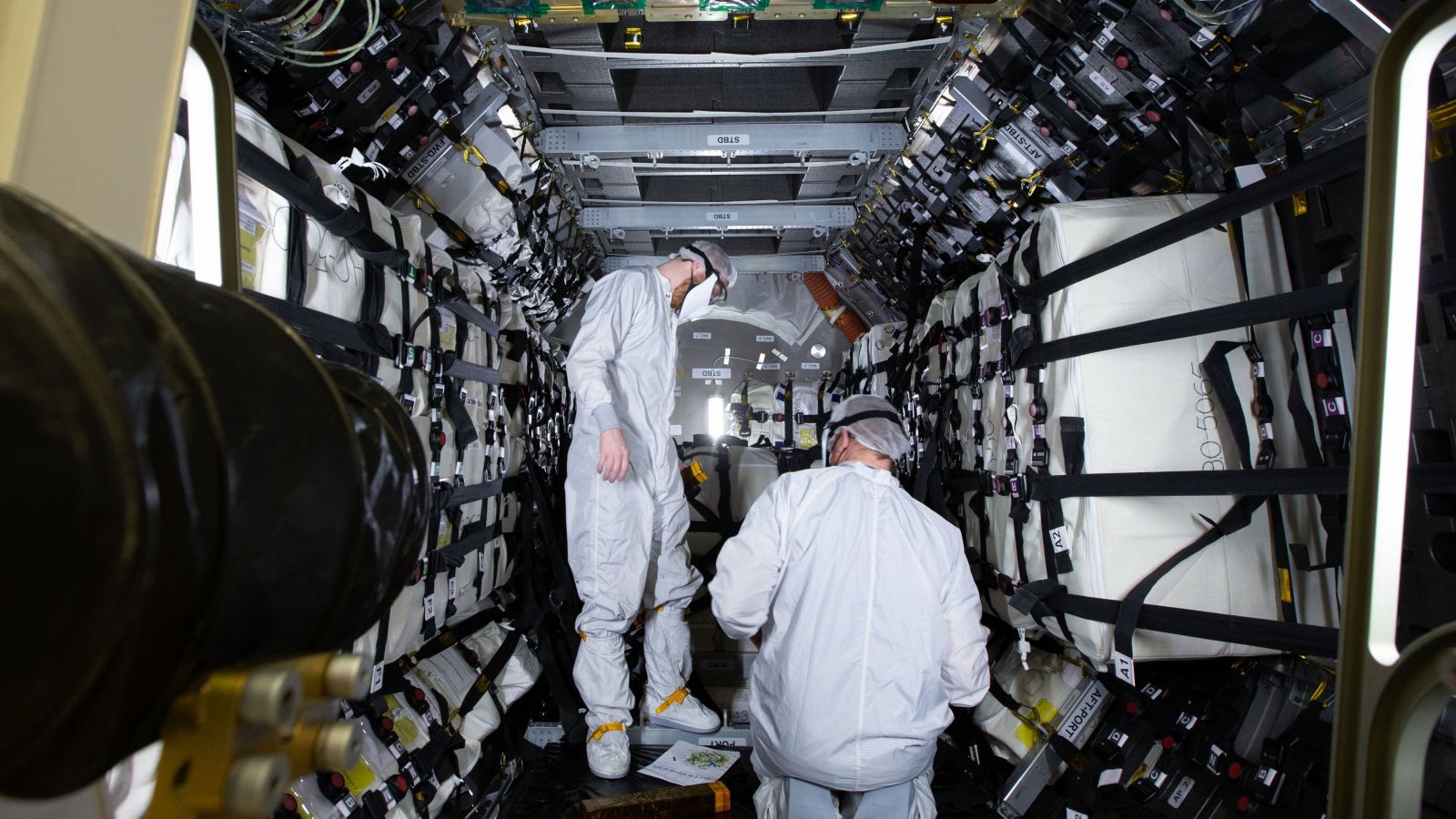 Cargo is placed in the Northrop Grumman NG-15 Cygnus spacecraft for delivery to the International Space Station. Credit: NASA 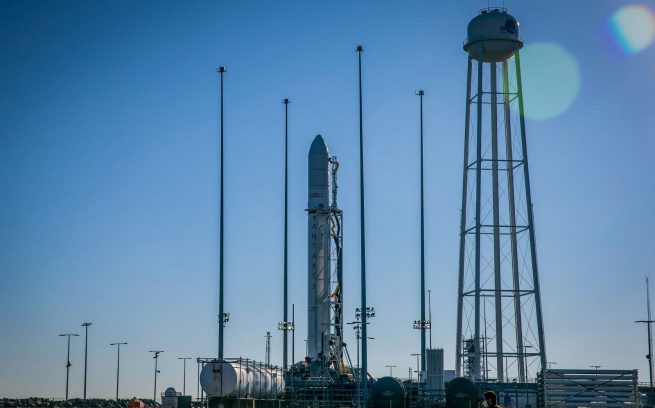 An Antares 230+ rocket stands in the vertical position at Pad 0A at Wallops Flight Facility in Virginia. Credit: NASA/Patrick Black

This is the 15th Cygnus spacecraft to be launched under NASA’s Commercial Resupply Services contracts and the 12th in an enhanced configuration.

The company continues the tradition of naming each Cygnus for an individual who “has played a pivotal role in human spaceflight.”

Northrop Grumman has named the NG-15 spacecraft after NASA mathematician Katherine Johnson, whose hand-written calculations were vital to human spaceflight and the advancement of rocketry.

According to NASA, there is currently a 75% chance of acceptable weather conditions for liftoff with ground winds and cumulus clouds being main concerns for the Saturday launch.

Aboard the 15th Cygnus resupply mission is about 8,200 pounds (3,700 kilograms) of crew supplies as well as experiments that support space exploration and aim to benefit humanity back on Earth. 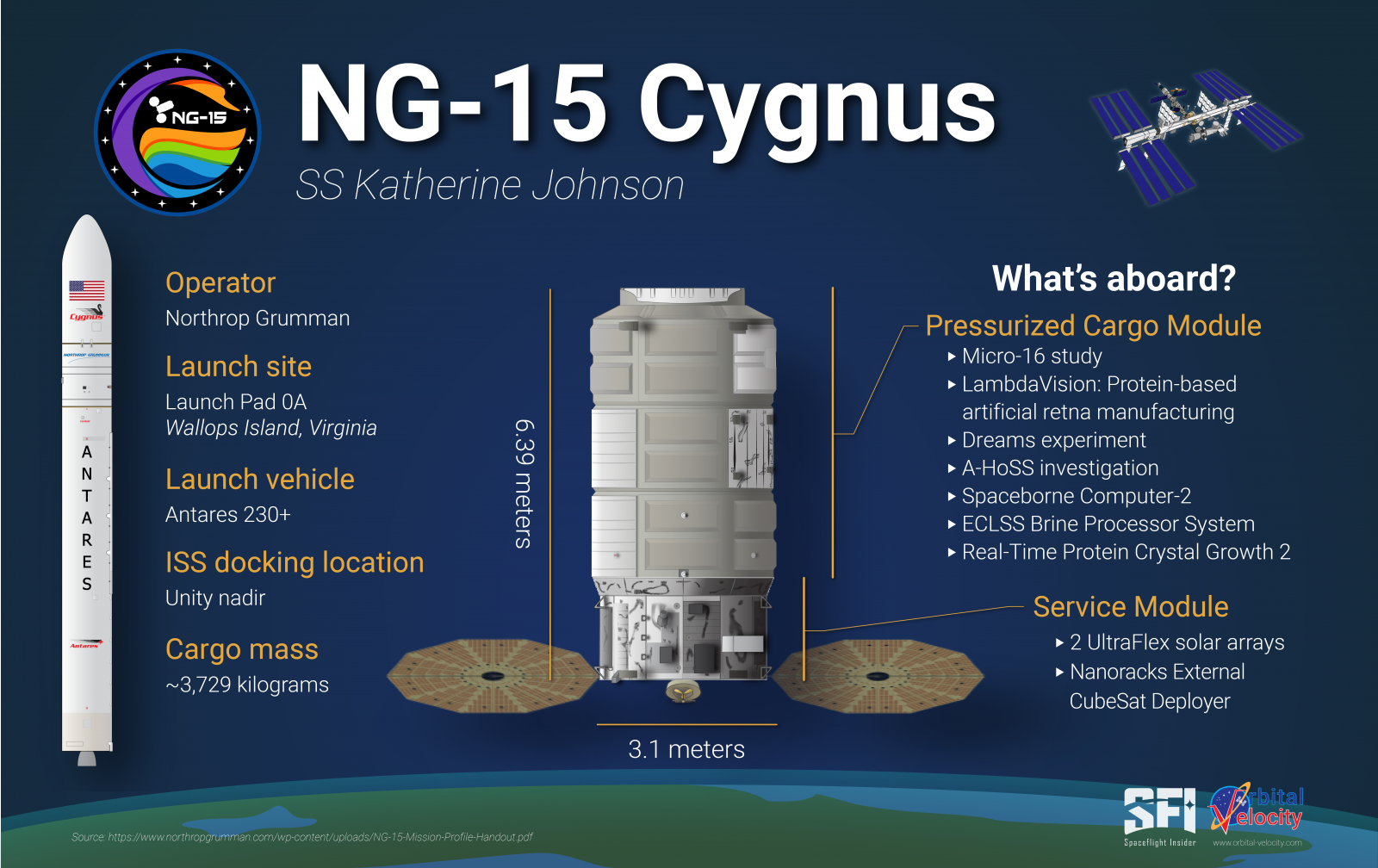 An experiment with tiny worms, Micro-16, is looking to test their strength by measuring the force the tiny helpers exert as they push little rubber pillars around on a microscope slide.

The microscopic experiment could help determine the cause of muscle weakening is space that astronauts experience due to living in a microgravity environment.

Results from this simulation are expected to help support therapies that can help aging humans on Earth as well as astronauts living in space.

A sleep monitor headband is another fact-gathering tool making its way to the ISS as the European Space Agency takes a look at the quality of sleep for astronauts.

Since quality of sleep is important for all humans, comprehensive data from this test hopes to shed light on sleep duration and other effects microgravity may have on astronauts living aboard the ISS as well as a better understanding of sleep in space in general. 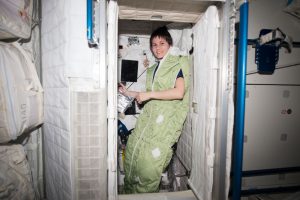 European Space Agency astronaut Samantha Cristoforetti floats inside a sleeping bag aboard the International Space Station in 2014. According to NASA, the new ESA Dreams experiment will provide a closer look at astronaut sleep in microgravity.
Credit: NASA

LamdaVison is launching an experiment to help those on Earth that suffer from retinal degenerative disease.

The company is “evaluating a manufacturing system that uses a light activated protein to replace the function of damaged cells in the eye” and hopes to verify findings that can support manufacturing these new retinas in microgravity as beneficial to proceed with processing in that environment.

Another investigation launching aboard Cygnus is related to future Artemis missions to the Moon, including Artemis 2, which is expected to be the first crewed deep space mission since 1972.

NASA wants to test the Hybrid Electronic Radiation Assessor, or HERA, detection system and confirm it can operate for 30 days without errors. This system was originally built for the Orion spacecraft but was modified for operation aboard the International Space Station.

A Spaceborne Computer study launched to the ISS in 2017 ran an “off-the-shelf” computer in space for 207 days without having to reset the system.

Spaceborne Computer-2 seeks to build on the success of its predecessor by proving that Earth-based data processing can be duplicated in space without sending all the raw data back to the ground for analysis. 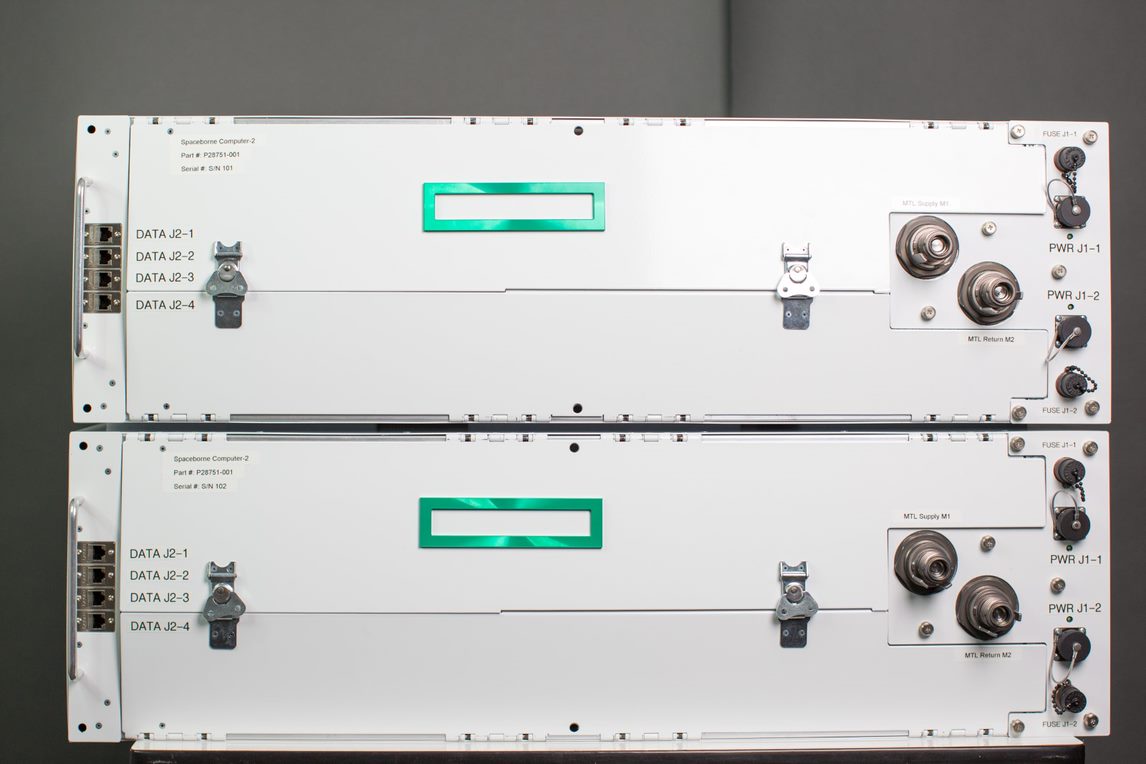 The Spaceborne Computer-2 is pictured in advance of its launch to the ISS. Credit: NASA

The Environmental Control and Life Support System is an important piece of hardware that helps provide for the recovery of water and water vapor on the ISS.

According to NASA, as crewed missions increase in duration, the need to recover 98% of water is optimal and new technology filtering out the brine and other contaminants from Urine Processor Assembly will help fulfill the mission of recovering the urine waste stream.

Over 100,00 proteins hold important information about our health and high-quality, high-protein crystals produced in microgravity are more beneficial as gravity on Earth can interfere with their growth.

These higher-quality protein crystal structures are closely related to its function. Uncovering the relationship between the two can lead to a better understanding of its function and helps scientists produce drugs that may help target disease and the subsequent treatment thereof.

Spending several months at the ISS

These are just a few of experiments heading toward the ISS aboard the NG-15 Cygnus spacecraft.

Once in orbit, the vehicle will take about two days to reach the outpost where it’ll be captured by the Canadarm2 remote manipulator system and berthed to the Earth-facing port of the Unity module. 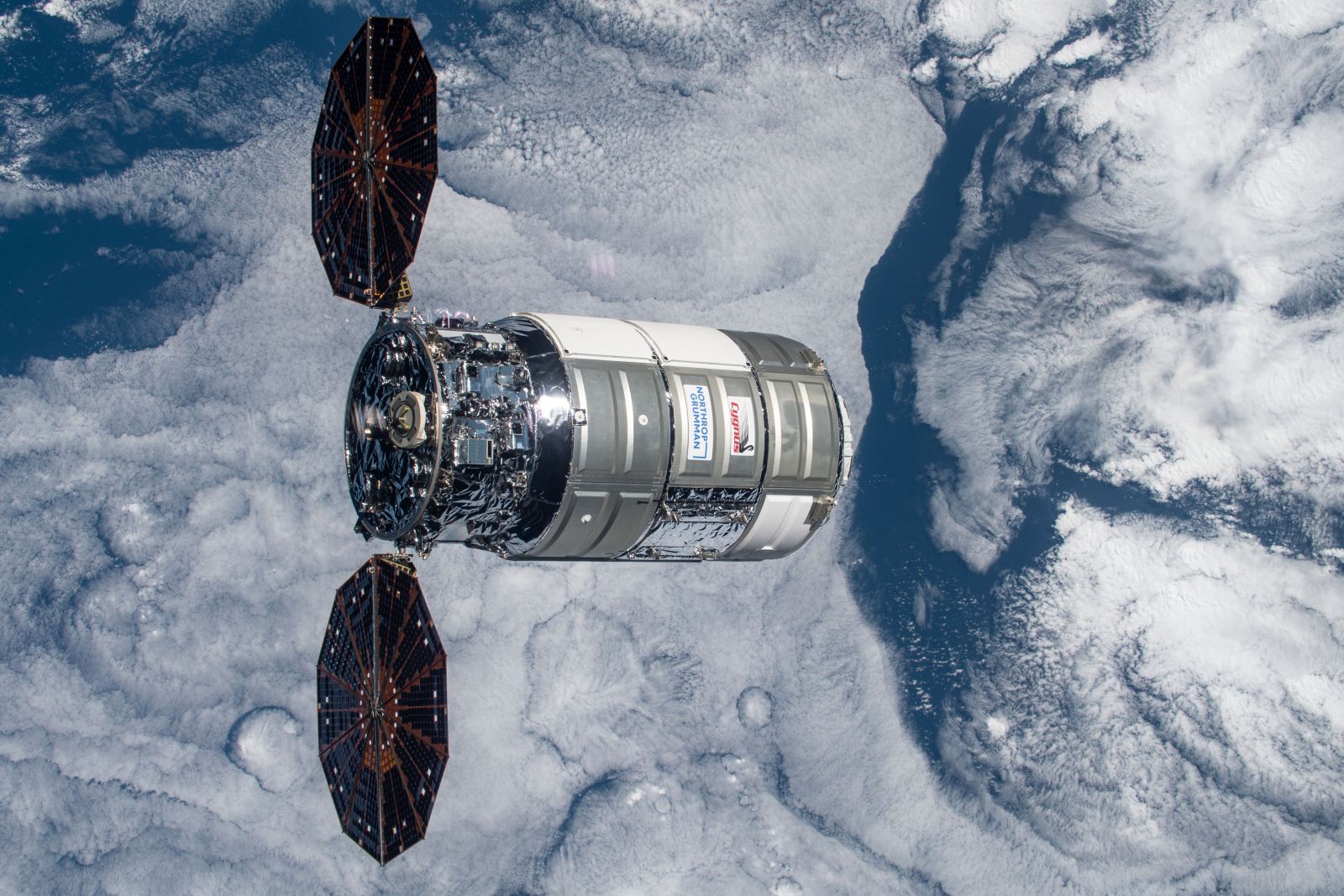 A view of the previous Cygnus spacecraft following its departure in January 2021. Credit: NASA

After the hatches between Unity and Cygnus are opened, the seven-person Expedition 64 crew will work to unload the spacecraft of its contents over its multi-month stay at the ISS.

Currently, NG-15 Cygnus is expected to remain berthed until at least May before being loaded with trash and unneeded equipment.

At the conclusion of its resupply mission, it’ll be unberthed and commanded to depart the vicinity of the outpost to perform a post-ISS mission that includes the deployment of several CubeSats via hardware by Nanoracks.

Once all of the spacecraft’s tasks are completed, it’ll be commanded to perform a deorbit burn to destructively reenter Earth’s atmosphere over the Southern Pacific Ocean.

Another Cygnus spacecraft, NG-16, is slated to launch later this year, potentially as early as July.