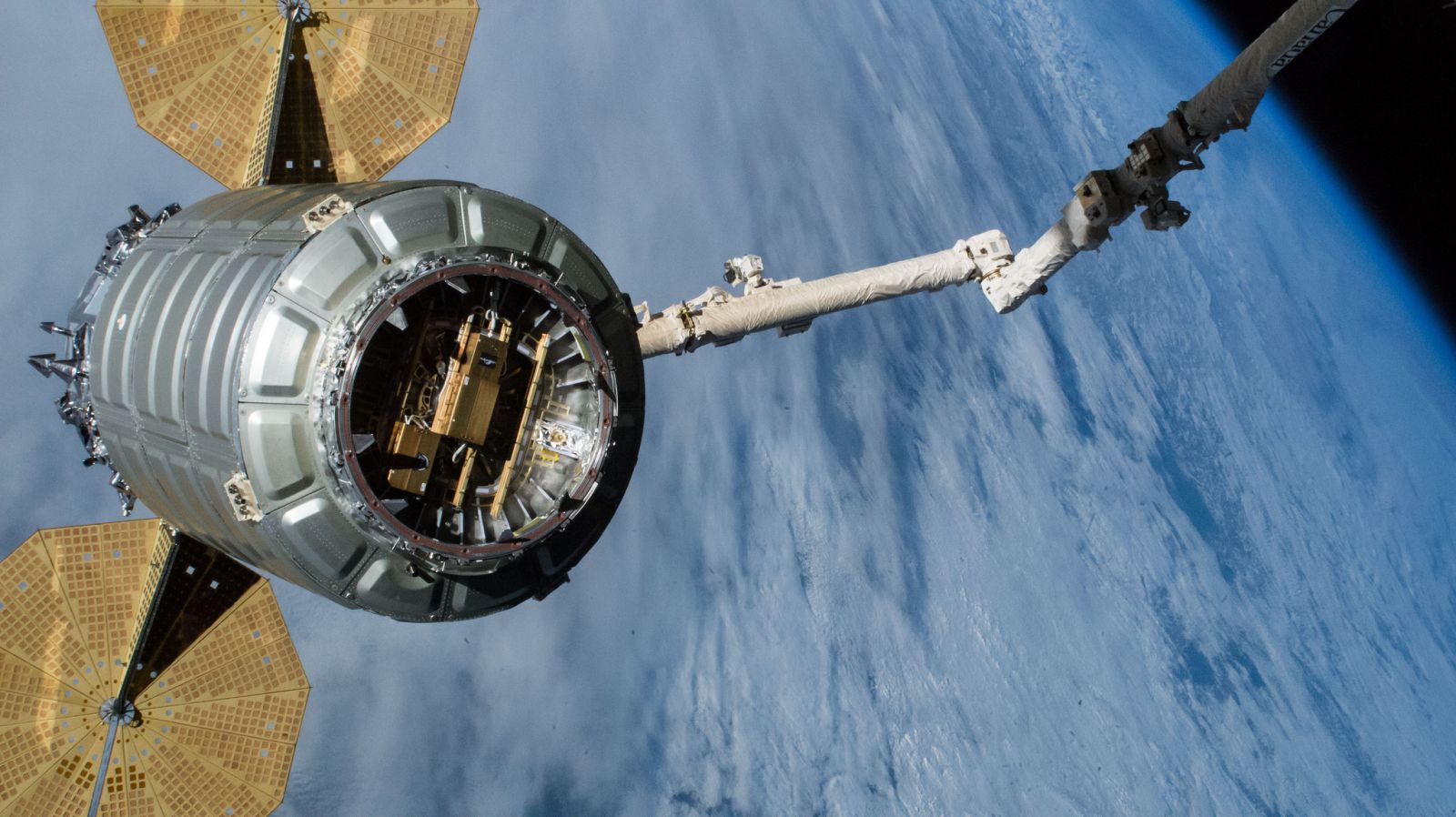 The NG-10 Cygnus was unberthed and released from the International Space Station on Feb. 8, 2019. Since then it performed a post-ISS mission to deploy several CubeSats, including some via a “SlingShot” deployer, seen here attached to the spacecraft’s hatch. Photo Credit: NASA

Northrop Grumman’s NG-10 Cygnus has performed its deorbit burn to fall back into the atmosphere, breaking apart as it re-entered over the Pacific Ocean.

Having launched Nov. 17, 2018, with some 7,400 pounds (3,350 kilograms) of supplies and spent 81 days attached to the International Space Station, the NG-10 Cygnus, named SS John Glenn by Northrop Grumman, was loaded with 5,500 pounds (2,500 kilograms) of trash before being unberthed Feb. 8 to perform a two-week stand-alone mission. That post-ISS flight came to an end at about 4:05 a.m. EST (09:05 GMT) Feb. 25, 2019, when the spacecraft’s engine performed a deorbit burn to lower its orbit enough for Earth’s atmosphere to drag it down, safely burning it up over the Pacific Ocean east of New Zealand.

“It was a flawless mission for Cygnus that further demonstrated its ability to operate as an in-orbit science platform and launch pad for deployment of commercial CubeSats on extended missions,” said Frank DeMauro, vice president and general manager, space systems for Northrop Grumman said in a company news release. “Now, we turn our attention to the next launch this spring where Cygnus will fly on an extended duration mission to further demonstrate its abilities as in-orbit test platform. These capabilities will showcase Cygnus as an evolving space vehicle that can build on the positive impact of the space station to grow new commercial partnerships.”

One of the most notable features of this post-ISS Cygnus mission was the use of a new CubeSat deployer called SlingShot, developed by SEOPS. It was brought to the outpost by the CRS-16 Dragon mission, which launched after SS John Young arrived to the ISS, and attached to the outside of Cygnus’ hatch.

With the current system of deploying CubeSats from visiting vehicles, they have to be packaged in a container on the outside of the spacecraft before launch and wait out the mission before being deployed in a particular orbit.

Attaching payload on the outside of Cygnus’ hatch allows flexibility for small payloads to be flown to the ISS anytime on any vehicle and, when the time is right, have astronauts aboard the space station attach the deployer, since they’d have access to the hatch while the vehicle was berthed. In principle, this could be done on any common berthing mechanism-based vehicle, such as Dragon and Cygnus and potentially Japan’s Kounotori cargo spacecraft.

In the hours after its Feb. 8 departure, Cygnus raised its orbit about 62 miles (100 kilometers) above the space station’s, or about 310 miles (500 kilometers) above Earth before deploying two passive optical reflector satellites: SEOPS-Quantum Radar-1 and 2. They are expected to remain in that orbit for at least two years, according to NASA.

“That is a great orbit for test demos,” Chad Brinkley, principal investigator for the facility and CEO of SEOPS, said in a NASA news release. “but if you look at the market for where rockets are trying to go, 500 kilometers is ideal for closing a business case for companies that are considering flying CubeSats to give them revenue from a satellite for two plus years.”

In a third slot on SlingShot was the UbiquityLink-1 orbit-to-ground communications hardware.

While in this high orbit, NanoRacks deployed two of three CubeSats from an external deployer. Those satellites were MySat-1 and a second CHEFSat satellite.

MySat-1 was the first payload NanoRacks deployed for the United Arab Emirates and was the first to be developed by students in that country, according to NanoRacks. 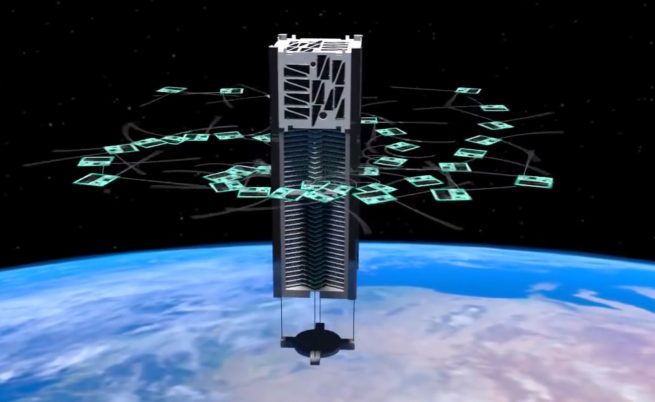 “We could not be more excited about all of the activity happening in the space industry in the UAE,” said NanoRacks Vice President of Business Development and Strategy Allen Herbert in a company statement. “We have a number of groundbreaking programs in the works, and the MySat-1 deployment is the perfect way to kick start NanoRacks activities in the region.”

After its orbit above ISS, Cygnus lowered its orbit to about 186 miles (300 kilometers), about 62 miles (100 kilometers) below the space station, to deploy KickSat-2, which itself is a deployer for 100 “ChipSats.”

Each ChipSat is about 1.3 inches (3.5 centimeters) square and are only several millimeters thick. KickSat-2 was deployed on Feb. 13 at a lower altitude to ensure the orbits of the small satellites do not last long before atmospheric drag pulls them back into the atmosphere, destroying them.

“This entire mission is a testament to the flight safety teams in-house at NanoRacks and at NASA’s Johnson Space Center, and the flight operations team at Northrop Grumman,” said NanoRacks External Payloads Manager Henry Martin in a statement. “We were able to shepherd some extremely challenging payloads through the NASA system on a timeline that met the needs of our customers. This required a lot of teams working very closely together, and we’re proud to have yet another successful mission that demonstrates the extended use of cargo vehicles.”

The next Cygnus mission is planned for around mid-April and is set to be the final flight under the original Commercial Resupply Services contract. Subsequent cargo flights by Northrop Grumman will be under the CRS-2 contract, which should start in the fall of 2019, the company said.