Next space station crew preparing for one year in space 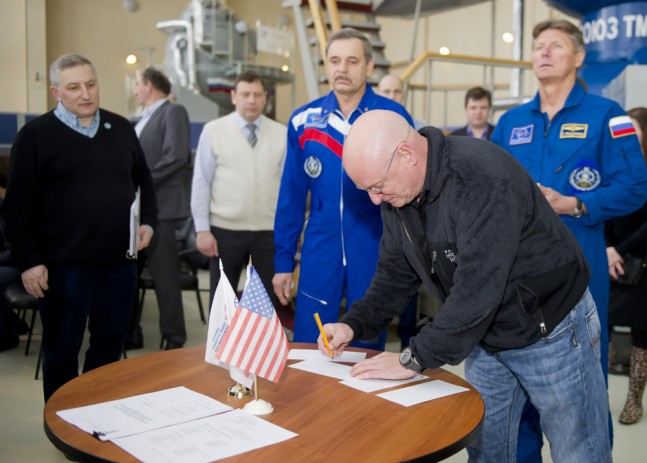 The US-Russian crew of Expedition 43 to the International Space Station (ISS) is intensively training for the upcoming orbital mission. NASA astronaut Scott Kelly along with Russian cosmonauts Mikhail Kornienko and Gennady Padalka are scheduled to be launched to ISS on Mar. 27, 2015, from Baikonur cosmodrome in Kazakhstan. For Kelly and Kornienko, it will be a special mission — they will perform the first one-year stay at the Space Station. In preparation for the upcoming mission, the crew passed the required pre-flight exams at the Gagarin Research and Testing Cosmonaut Training Center in Star City, Russia.

Crew commander Padalka has successfully passed the examination on the Teleoperator-2 simulator. The simulator is designed for long-term expedition crews to practice manual remote control of pilotless objects from the ISS.

In case of emergency, the cosmonauts must be able to tie up and dock the spacecraft manually.

The members of the primary and backup crews were examined on the Don-Soyuz simulator. On Feb. 18, Padalka and Kornienko demonstrated to the examination commission their excellent skills of redocking and manual tying up of a spacecraft at the station.

They have also successfully coped with the task of “landing” as close as possible to the designated point, experiencing minimal overload.

In the coming days, both main and backup crew will practice a “typical flight day” on a simulator of the Russian segment of the ISS.

On Mar. 4, the crew will begin the final stage of the pre-flight training — a comprehensive exam training. Meanwhile, an intensive pre-launch processing of Russian Soyuz TMA-16M manned spacecraft continues at Baikonur. On Feb. 16, the air-tightness testing of Soyuz was carried out in the assembly, integration and test building, of the cosmodrome’s pad 2B.

The works in the low-pressure chamber were successfully completed on Feb. 24, and the manned spacecraft was moved to the working place at the cosmodrome’s pad 254, where the experts of the Russian rocket and space industry enterprises unloaded Soyuz TMA-16M from the carriage, installed it on the stand, and connected the ground-based equipment to the spacecraft. The autonomous tests of the spacecraft are continuing.

Researchers expect the upcoming one-year mission to yield beneficial knowledge on the medical, psychological and biomedical challenges explorers may face as they venture to an asteroid, Mars and beyond. This mission will also provide an additional opportunity for cooperation between research teams around the world.