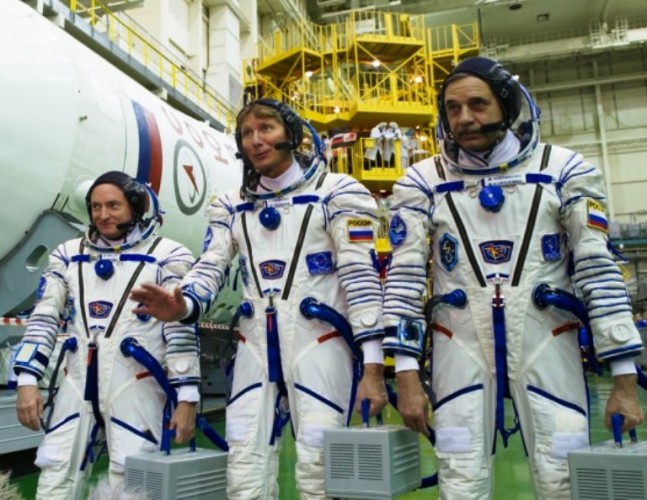 The Expedition 43 crew to the International Space Station consisting of NASA astronaut Scott Kelly and Russian Space Agency (Roscosmos) cosmonauts Mikhail Kornienko and Gennady Padalka have arrived in Baikonur, Kazakhstan, on Saturday. Together with the backup crew, they were met by the members of the State Commission and Technical Management. Commanders of the crews reported on their readiness for pre-flight training and Soyuz TMA-16M spacecraft acceptance. On Sunday, March 15, they initiated the final training phase in the processing facility.

The crews departed Star City, near Moscow, just one day after Soyuz TMA-14M crew members Aleksander Samokutyaev and Elena Serova arrived back in the Russian capital. Before the departure, the two crews also participated in the traditional visit to Red Square and pre-flight press conference ahead of the farewell ceremony. “Last day in Star City is as the Inception riddle: waiting for a train, a train that’ll take me far away,” Kelly commented on his trip to Baikonur via Twitter.

Operations at the launch site in Baikonur started for the crew with a suit-up exercise, putting on their Sokol Launch and Entry Suits for leak and fit checks under the supervision of specialists. The trio also made a visit of the Spacecraft Processing Facility to enter their Soyuz capsule, inspect the spacecraft and get acquainted with the on board documentation.

A meeting of Technical Management was held on Sunday and a decision to fill the Soyuz TMA-16M spacecraft with propellant components and compressed gases was accepted. Later, the craft will return to the processing facility for final cargo loading, inspections and the installation of the launch shroud. The crew will spend the next week with inspections of pre-packed cargo, procedure reviews and familiarization with emergency equipment. They will also conduct conferences with mission control and with the three crew members already in orbit.

The future ISS inhabitants will also have some quiet time to spend with their families and for personal preparations for their long mission.

The Soyuz FG rocket with the Soyuz TMA-16M spacecraft will lift off from the Site 1/5 located at the Baikonur Cosmodrome at 19:42 UTC on Mar. 27. The Expedition 43 crew will dock to the ISS after four orbits to join Terry Virts (NASA), Samantha Cristoforetti (ESA) and Anton Shkaplerov (Roscosmos). Padalka will return to Earth in September with European Space Agency Astronaut Andreas Mogensen and spaceflight participant Sarah Brightman, while Kornienko and Kelly will perform the first one-year stay at the ISS.

NASA has been given the directive of sending crews to the planet Mars. Long duration stays on board the orbiting laboratory could prove beneficial to aiding the space agency in acquiring the skills to accomplish this feat.