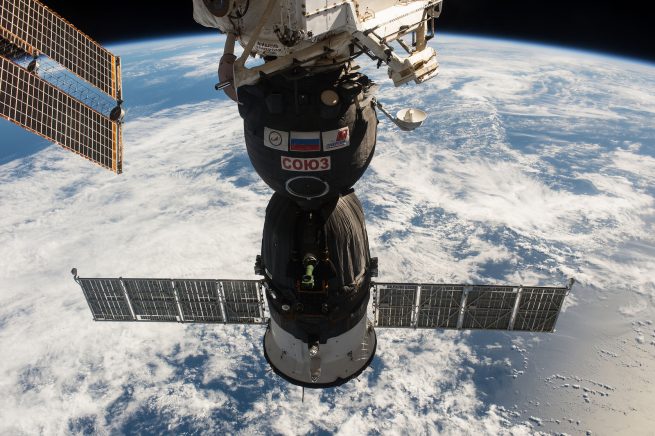 Since 2011, NASA has relied on Russian Soyuz spacecraft to ferry U.S. astronauts to and from the International Space Station. Photo Credit: NASA

While the first Commercial Crew flights are just around the corner, NASA is looking to buy a little more buffer time in order to ensure uninterrupted access to the International Space Station.

First reported by NASASpaceflight, a procurement document published on Feb. 13, 2019, shows the U.S. space agency is looking to buy two more seats aboard Russian Soyuz spacecraft. These seats would presumably be on Soyuz MS-15 and Soyuz MS-16 in the fall of 2019 and spring of 2020 respectively.

“NASA has contracts with two U.S. commercial companies for crew transportation to the ISS,” the procurement reads. “Each provider has two test flights planned before the first ISS crew rotation flights; an uncrewed test flight and a short duration, minimum crew test flight. Further, each provider has an additional abort test planned.”

According to the procurement, the agency is hoping to create a larger buffer between the first Commercial Crew flights and operation crew rotations just in case problems are found during the test flights, which could further delay the program.

“The consequences of no U.S. crew on ISS warrant protection by acquiring additional seats,” the procurement continues. “The absence of U.S. crew members at any point would diminish ISS operations to an inoperable state.”

Currently NASA and SpaceX are targeting March 2 for the first unpiloted test flight of Crew Dragon. An in-flight abort would follow in June before a crewed evaluation flight not long after that.

Assuming no further delays occur, that would mean about eight years will have passed since the last orbital human spaceflight from U.S. soil. That mission was STS-135 and saw Space Shuttle Atlantis close out NASA’s 30-year Space Transportation System program in July 2011.

For now, the next crewed flight to the ISS is planned to be Soyuz MS-12 on March 14, 2019. It will see Russian cosmonaut Aleksey Ovchinin and NASA astronaut Nick Hague attempt to travel to the outpost again after their Soyuz MS-10 in-flight abort in October 2018. They will be joined by NASA astronaut Christina Koch.

The Soyuz MS-12 trio are expected to remain aboard the outpost until October 2019. However, there have been multiple reports in Russia that Hague’s stay aboard the outpost, as well as NASA astronaut Andrew Morgan (slated to launch in June 2019), could be lengthened to nine months. Although, NASA has yet to confirm if these extended missions are in the works.

Those potential mission extensions stem from Russia’s want to free up a seat to fly a United Arab Emirate astronaut, who was originally planning on a short 10 day mission launching in Soyuz MS-12 and landing in an open seat on Soyuz MS-10 before last year’s in-flight abort forced flight assignments to be rearranged. The Emirati astronaut was notionally moved to Soyuz MS-15 for launch and a landing in Soyuz MS-12 should it be vacated by Hague in an extended mission.

Should the two new seats be purchased, the Emirati astronaut would again be bumped regardless of whether Hague and Morgan get a mission extension as there is another U.S. astronaut manifested for Soyuz MS-15 in addition to a Russian cosmonaut.

Soyuz MS-16, however, currently has two cosmonauts manifested and no U.S. astronaut. The procurement would add another U.S. astronaut to that flight.

This should be a national disgrace and embarrassment were it not for Trump’s national emergency declaration as well as Congressional Democrats promoting their new green deal. NASA’s commercial crew woes remain low on the American people’s consciousness but I only sorry for the Emirati cosmonaut, who keeps getting bumped.

Unfortunately far too much time and money was wasted on SLS. Thankfully SpaceX and Boeing will provide commercial crew this year.

The SLS is going to be our best launcher.

Because of the international Orion Lunar Missions and the reusable, super large, and ultra propellant efficient 2,600 Isp to 14,000+ Isp electric propulsion third stages and space tugs America’s SLS will launch.

A billionaire is not really the best designer and implementer of useful and realistic national space goals and Geo-strategic space plans.

“Those issues should be resolvable, but they illustrate the point that dependence on a patron or space baron is a single point failure situation.”

And, “A patron with deep pockets can do much to foster a field of endeavor, but the weakness is that progress may end when that individual dies, becomes disinterested or bankrupt, or otherwise decreases the resources needed to implement that vision.”

Mr. Miner,
Keep your comments succinct and show some courtesy. Your repeated dissertations and assertions have received numerous complaints. Moreover, they are engendering open hostility, something that is counter-productive to a civil conversation.
Jason Rhian – Editor, SpaceFlight Insider