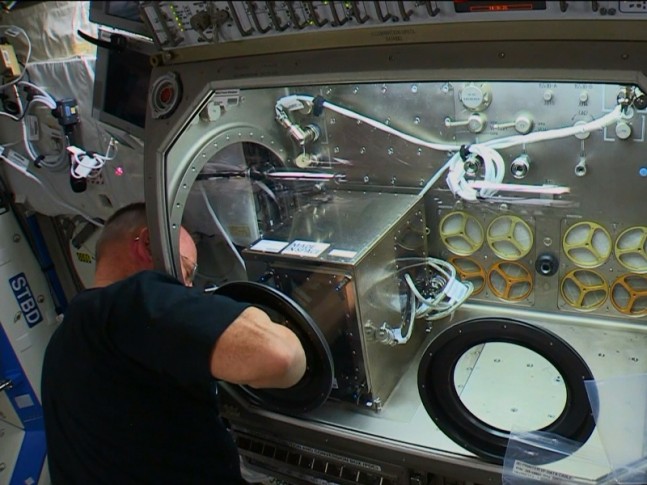 Wasting little time since it arrived at the International Space Station (ISS), the Expedition 41 crew has installed a Made In Space-produced 3D printer in the station’s Microgravity Science Glovebox. The space station’s current commander, NASA astronaut Barry “Butch” Wilmore, spent a good portion of Monday, Nov. 17 to install the device. The U.S. Space Agency hopes that the printer will validate procedures which could help future crews, on long duration missions be more self sufficient.

The printer was sent to the station atop a Space Exploration Technologies’ (SpaceX ) Falcon 9 V1.1 rocket. It was included in the payload carried aloft by the Dragon spacecraft carrying out the SpX-4 mission on Sept. 21, 2014. Its safe arrival to the station represented the culmination of the efforts of Made in Space.

“The fact is that, today, the reality of space travel really isn’t what we all imagined it could be. We are currently very dependent on Earth,” said Made in Space’s Jason Dunn. “Currently, space travel is an Earth-dependent form of exploration…we need to fix that.”

Now that the 3D printer is in place, Wilmore will calibrate the device and begin testing how it functions in the microgravity environment.

Once that is done, crew on the ISS will test out the capabilities of additive manufacturing or 3D printing on orbit. This technology could provide huge dividends for future deep space missions. As it stands now, spare parts have to be stored on board – costing crews heavily in terms of mass. As one might imagine, knowing exactly which component might fail – is impossible. Having a 3D printer on board could alleviate that problem.

Through this technology, the specifications for numerous spacecraft components and an array of other parts could be stored on a hard drive. Once a part fails, the crew could simply pull up those specs and using a cache of material flown just for these purposes – “print” a new one. Made in Space did extensive testing of their printer through NASA’s Flight Opportunities Program. Photo Credit: NASA

“We recognized that if we could put (additive) manufacturing on the space station we actually had a chance at making a sustainable business, today that could help fund the company to advance and, one day, do bigger things. With the Flight Opportunities Program we started that effort in 2011,” Dunn said.

While Wilmore is working on getting the printer up and running, his fellow Expedition 41 crew members will have more “mundane” matters to handle.

Samokutyaev and Serova were also part of a cardiovascular exam that employed the station’s exercise bike.

The 16 different nations that are presently a part of the ISS program, are not slowing down the station’s normal ebb and flow, in fact things are set to pick up. A Soyuz TMA-15M spacecraft is currently being prepared for a Nov. 23 launch. Liftoff will employ the venerable Soyuz booster and which will take flight from the Baikonur Cosmodrone located in Kazakhstan. The crew will consist of Russian cosmonaut Anton Shkaplerov as well as European Space Agency astronaut Samantha Cristoforetti and NASA astronaut Terry Virts.