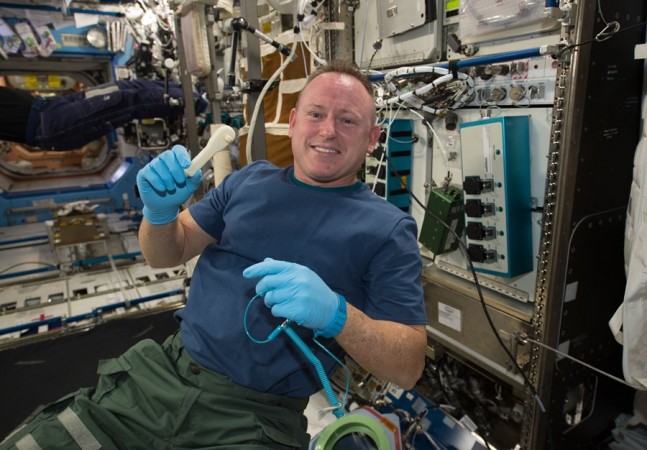 While not quite the ‘replicator’ from the Star Trek television series and movies – a new technology is proving its worth on orbit. NASA and the commercial space company Made In Space – have successfully ‘printed’ a small ratchet wrench, that did not exist on the International Space Station (ISS) before it was transmitted up to the Expedition 42 crew currently on board the orbiting laboratory. Using NASA’s data uplink system and printed out using a special 3D printer. It was the first step toward using technology which might make missions into deep space more feasible.

3D printing, officially known as additive manufacturing, has become all the rage given the “disruptive” nature of the technology. Traditionally, when parts are manufactured on Earth, they are either machined or molded. In machining, the process starts with a block of raw material and the part is carved from the block, resulting in a finished product but leaving a lot of wasted material behind.

The Earth-based version of the wrench that was produced on orbit. Photo Credit: NASA

Conversely, the manufacture of molded parts relies on the pressing of raw material into a mold, thereby creating a part usually using high pressure. While molding eliminates a lot of waste, customization is not always possible. Molds are designed to create thousands, if not millions, of parts from a single design.

Additive manufacturing combines the best of both worlds. Using this technique reduces manufacturing waste. It also allows parts to be customized as needed for a particular project.

“For the printer’s final test in this phase of operations, NASA wanted to validate the process for printing on demand, which will be critical on longer journeys to Mars,” explained Niki Werkheiser, the space station 3-D printer program manager at NASA’s Marshall Space Flight Center in Huntsville, Alabama. “In less than a week, the ratchet was designed, approved by safety and other NASA reviewers, and the file was sent to space where the printer made the wrench in four hours.”

Additive manufacturing has been around for nearly 20 years – but, until recently, the equipment has been extremely expensive. The primary use of 3D printing had been the creation of ‘engineering samples’ – parts manufactured to show designers how things might look. The designers could then adjust the parts before more traditional manufacturing practices were put to task producing those components.

Today, additive manufacturing is a fast-growing part of the business sector. Many companies now produce small tabletop units that are inexpensive enough for small businesses and individuals to own. This has led to an explosion of designs that nearly anyone with a 3D printer could produce.

Made In Space constructed the printer for NASA specifically for use on the ISS. When the printer was delivered in September of 2014, it included a small SD card with the parts that would be printed and tested. All the parts had backup copies should anything go wrong during the manufacturing process.

“If you can transmit a file to the station as quickly as you can send an email, it opens up endless possibilities for all the types of things that you can make from CubeSat components to experiment hardware,” Werkheiser said. “We even may be able to make objects that previously couldn’t even be launched to space.”

Unlike the other objects printed on the ISS, this small ratchet was the first object not sent on the backup media. The only copies of the design existed on Earth prior to printing. It was transmitted to the astronauts from Mission Control located at NASA’s Johnson Space Center in Houston, Texas. The design file was checked several times for data accuracy before the crew printed it out on the station. “The socket wrench we just manufactured is the first object we designed on the ground and sent digitally to space, on the fly,” said Mike Chen, CTO of Made In Space.

So why print a ratchet? The Made In Space team overheard ISS Commander Barry Wilmore mention during a discussion with Earth that they could really use a small ratchet.  The team then designed the wrench and sent it up to the ISS.

“Because it’s a lot faster to send digital data (which can travel at the speed of light) to space than it is to send physical objects (which involves waiting months to years for a rocket), it makes more sense to 3D-print things in space, when we can, instead of launching them,” Chen explained.

All of the parts created on the space station are scheduled to return to Earth for testing. NASA wants to know if there are any structural differences as compared to those same parts manufactured on Earth.

Mike Chen and his team are bullish on the future. He concluded his comments by saying, “On the ISS this type of technology translates to lower costs for experiments, faster design iteration, and a safer, better experience for the crew members, who can use it to replace broken parts or create new tools on demand. But what I’m really excited about is the impact this could have on human space exploration beyond Earth orbit.”

While NASA is slightly more conservative in its approach to the use of this technology on orbit – the space agency has high hopes for its use on future missions. International Space Station Expedition 42 Commander Barry Wilmore holds up the coupon with the wrench printed on it. Photo Credit: NASA

“We wanted to work this just like we would for tools that the astronauts will 3-D print and use on the station,” explained Werkheiser. “This wrench will not be used in space, but what if it were a tool the crew needed? We are breaking new ground not only in the way we manufacture in space but also in the way we operate and approve space hardware that is built in space, rather than launched from Earth.”

Once NASA has had an opportunity to review how things went with these first tests – the agency has stated it will continue to pursue its development as the agency pursues the goal of sending crews to deep space destinations such as an asteroid towed to lunar orbit and, perhaps one day, Mars.

“We can’t wait to get these objects home and put them through structural and mechanical testing,” explained Quincy Bean, the principal investigator for the experiment at Marshall. “We really won’t know how well this process worked in space until we inspect the parts and complete these tests.”

NASA and Made in Space will now test both the components, tools and other items that are produced on the $100 billion orbiting laboratory – as well as the printer itself.

“For our next phase of operations, we are working with the astronaut office to identify existing tools that we can make with the printer.” Werkheiser said. “We can’t wait until it is routine to see station astronauts use tools that they built in space.” The station has 16 different nations participating on the research that the orbiting laboratory does on orbit. Photo Credit: NASA

“This wrench will not be used in space…” So print two; send one back to Earth for testing and let them use the other one. What better way to test it? And we wonder why anything to do with NASA and space flight costs a fortune.

“Mike Chen … “On the ISS this type of technology translates to lower costs for experiments, faster design iteration, and a safer, better experience for the crew members,”

“it’s a lot faster to send digital data … to space than it is to send physical objects (which involves waiting months to years for a rocket), it makes more sense to 3D-print things in space, when we can, instead of launching them,” Chen explained.”

“explained Werkheiser. “This wrench will not be used in space, but what if it were a tool the crew needed? ”

So safety is number one, and the crew needs a wrench apparently to tighten bolts on equipment to keep them safe. But it takes months to years to get a wrench flown up. So?

Print a wrench and send it back to earth, test it, and in a couple years print a new wrench…. does something seem convoluted or just me.

“And we wonder why anything to do with NASA and space flight costs a fortune.”

I always notice how just about anything that is NASA exclusive is either damned with faint praise or just plain insulted away on space forums. On the other hand anything that is associated with SpaceX is held up as a glorious achievement. Crashing on a barge is turned into a new age. This double dealing poisons the public image of NASA while SpaceX relies almost completely on the space agency for it’s existence. The Ayn-Rand-in-Space libertarian NASA haters have been at it for years and now much of their garbage is mistaken for truth. New Space is a parasite destroying the future of space exploration. SpaceX has very limited capabilities with their kerosene hobby rocket that is a throwback to the early 1960’s with it’s cluster of low thrust engines and lack of a hydrogen upper stage. But expert public relations and a space agency infiltrated with two-faced double agents at the highest level has resulted in endless infomercial “press releases” inferring SpaceX is our real space program. It’s bad enough that NASA budget cuts over the past decades have resulted in a forced-into-retirement astronaut killer and an Albatross space station going in endless circles. Going nowhere. Now the con artists and their sideshow are doing everything they can to “privatize” space.
New Space is the worst thing that has ever happened to space exploration.

Bandagin
I think you might have missed out on why others are so enthusiastic about SpaceX. They are trying to do what NASA used to do right up to 1975 when politicians pulled the rug out from underneath them.
This article, about the 3-D printer, is about something great. A proof of concept project with huge potential. If successful, resupply manifests can be simplified, and eventually worn items could conceivably be recycled back into new.