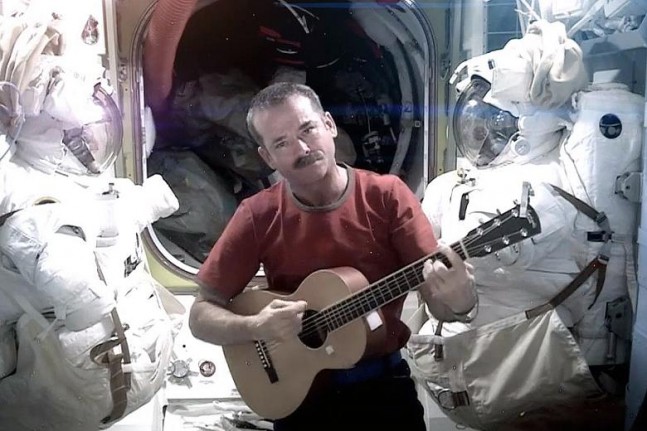 Chris Hadfield produced a rendition of "Space Oddity" - but don't expect to see or hear it too much in the future. Image Credit: NASA

“Far above the world, Planet Earth is blue,” crooned everyone’s favorite singing spaceman, Chris Hadfield from his perch on the International Space Station (ISS). A year ago, while commander of the ISS, the Canadian covered David Bowie’s 1969 tune Space Oddity from an orbit more than 260 miles (420 kilometers) high. Now the Youtube video of the performance, which quickly went viral, is to be taken down.

Hadfield’s recording was no spur of the moment inspiration. It was made over a period of six months and involved Canadian producer Joe Corcoran, who did the musical arrangement, and compatriot film-maker Andrew Tidby, who engineered the classy video, later watched by an Internet audience of 22 million. Playing the piano intro was Emm Gryner – a member of Bowie’s band in 1999-2000. Hadfield and Gryner had previously collaborated on another song, “Christopher”, to celebrate his first spacewalk in 2004 and share the same hometown, in Sarnia, Ontario. Hadfield had one of the most unusual venues in un-human history (to date). Photo Credit: STS-129 / NASA

Born in 1959, Hadfield joined the Canadian Armed Forces before being accepted into the astronaut program of the Canadian Space Agency in 1992. Three years later, he flew his first space mission aboard STS-74, which involved a visit to the Russian Mir space station. Another shuttle assignment followed, STS-100 in 2001, and then a tour of duty with the Expedition 34 crew to the ISS beginning in December 2012.

When Expedition 35 commenced in March 2013, Hadfield assumed the role of commander. Forbes magazine described Hadfield as “perhaps the most social media savvy astronaut ever to leave Earth.” His regular twitter posts and lyrical descriptions of the panoramas of our home planet from low Earth orbit garnered him an army of followers.

The Canadian also found time to record music for an album and the most famous performance of Space Oddity since David Bowie released the tune in the same year that astronauts first landed on the Moon – an event that inspired the young Hadfield to become a spacefarer himself. The video was released onto Youtube, with Bowie’s blessing and a one-year license, upon Hadfield’s return to Earth.

The license expires today and the five-and-a-half-minute recording, which has attracted more than 22 million plays, will no longer be watchable on-line. Yet it has helped inspire a new generation of spaceflight enthusiasts with its spectacular views both inside and outside the ISS backed by one of the most iconic tunes of the Space Age.