Kounotori 9, also called HTV-9, was launched at 1:31 p.m. EDT (17:31 UTC) May 20, 2020, from Tanegashima Space Center, which is located on the Japanese island of Tanegashima, about 40 kilometers south of Kyushu, the southwesternmost of the main islands of the Japanese archipelago.

The spacecraft’s carrier rocket, the H-2B, took about 15 minutes to deposit the spacecraft into a parking orbit.

Inside the cargo vehicle is about 6,200 kilograms of supplies bound for the Expedition 63 crew, including the final set of lithium-ion batteries to finish the years-long process of replacing the old nickel-hydrogen units on the space station integrated truss. 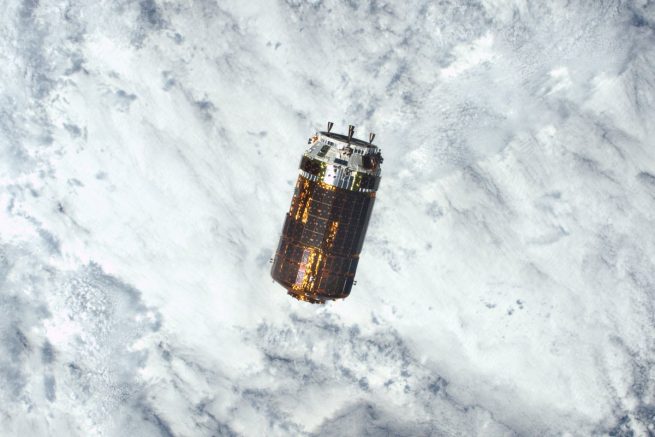 A file photo of a previous Kounotori spacecraft approaching the ISS. Credit: NASA

The Kounotori spacecraft and H-2B rocket are manufactured by Mitsubishi Heavy Industries. The expendable spacecraft is approximately 4.4 meters wide and 10 meters long and has a mass of about 10,500 kilograms, not counting any cargo.

It’s first flight was in September 2009 with the Kounotori 1 mission. JAXA — the Japan Aerospace Exploration Agency — has typically flown one spacecraft about every year to year-and-a-half.

Kounotori, which in Japanese means “white stork,” has four sections, a Pressurized Logistics Carrier at the top, which has a volume of about 14 cubic meters and includes a berthing mechanism; an Unpressurized Logistics Carrier in the center of the vehicle, which also includes an Exposed Pallet that carriers external experiments or orbital replacement units, such as lithium-ion batteries in the case of this mission; an Avionics Module; and a Propulsion Module that contains four main thrusters.

Additionally, at the top and bottom of the spacecraft are a total of 28 attitude control thrusters.

Moreover, built into the side of about half of the vehicle are solar cells to power the spacecraft during its mission.

After the Kounotori 9 mission, Japan’s next cargo resupply mission is expected to utilize a new vehicle currently called HTV-X. According to NASA, the new vehicle will have a reusable pressurized cargo section, is lighter and can carry more cargo. 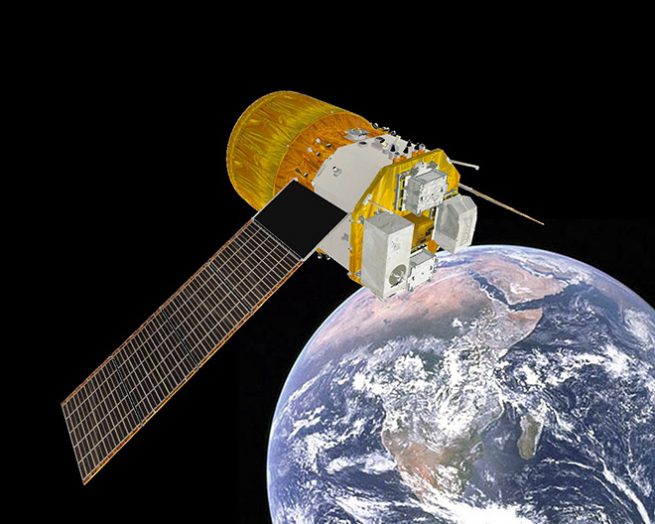 An illustration of an HTV-X spacecraft in space. Credit: JAXA

Additionally, HTV-X will have a docking adapter, rather than a berthing port, and will be able to autonomously navigate to one of the outpost’s international docking adapters.

The first flight of HTV-X is scheduled for sometime in 2022 and has the potential to also be used to service the planned Lunar Gateway later in the decade.

The H-2B carrier rocket was specifically designed to launch the Kounotori cargo ship, which is why the spacecraft’s acronym is HTV, which stands for H-2 Transfer Vehicle.

H-2B stands 56.6 meters tall and has two stages, plus four strap-on boosters to augment its thrust during the first two minutes of flight.

Kounotori 9 will mark the last time the H-2B is flown. JAXA plans to build a more-powerful booster called the H3.

According to the Japanese space agency, the H3  is set to fly for the first time as early as 2020 and is planned to be the country’s new flagship rocket and will replace both the H-2B and H-2A.

According to JAXA, the pressurized compartment of the Kounotori 9 is carrying several experiments to the International Space Station, including an integrated Standard Imager for Microsatellites, a Solid Combustion Experiment Module and related equipment for FLARE, which stands for “Flammability Limits At Reduced-g Experiment.”

Other items being sent to the outpost include broadcast-related equipment as well as fresh food and crew provisions for members of Expedition 63. Also being sent up is a new EXPRESS rack, the European Drawer Rack Mark II, a tank for the Water Storage System and a high-pressure nitrogen tank. 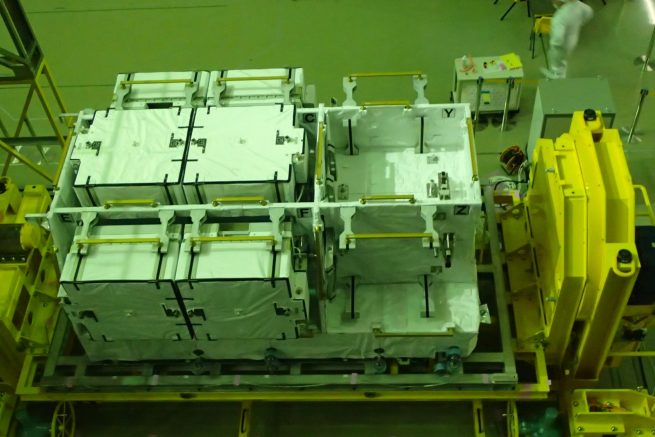 Additionally, the Unpressurized Logistics Carrier is set to have several more lithium-ion batteries to replace the remaining nickel-hydrogen units aboard the ISS. This set is destined for the far starboard truss segment and will be installed by spacewalkers as early as June.

Now that the spacecraft is in orbit, it is planned to take about five days to reach the outpost where it will position itself below the station’s Destiny module to allow for the 17.6-meter-long Canadarm2 remote manipulator system to capture the vehicle. At the controls of the arm will be NASA astronaut and Expedition 63 Commander Chris Cassidy.

Over several hours, the arm will position Kounotori 9 just below the Earth-facing port of the Harmony module and berth the spacecraft.

Next up, Crew Dragon

After this vehicle arrives at the ISS, the next visitor to the station is set to be the crew of SpaceX’s Crew Dragon Demo-2 mission. It’ll bring with it NASA astronauts Doug Hurley and Bob Behnken.

As things stand now, the Demo-2 mission is set to launch on May 27, setting up Crew Dragon and its two occupants to arrive at the ISS the next day, May 28.

Once there, the Demo-2 duo is expected to stay at the ISS for at least 30 days, however there is a possibility their flight is extended by up to 119 days, depending on how the vehicle handles. According to NASA, the limiting factor for this mission is the degradation of Crew Dragon’s solar cells.

In addition to the various evaluations on Crew Dragon, it is expected that Behnken will partner with Cassidy to perform a number of spacewalks to install the batteries brought to the ISS aboard Kounotori 9. Hurley is set to support the spacewalkers inside the outpost.