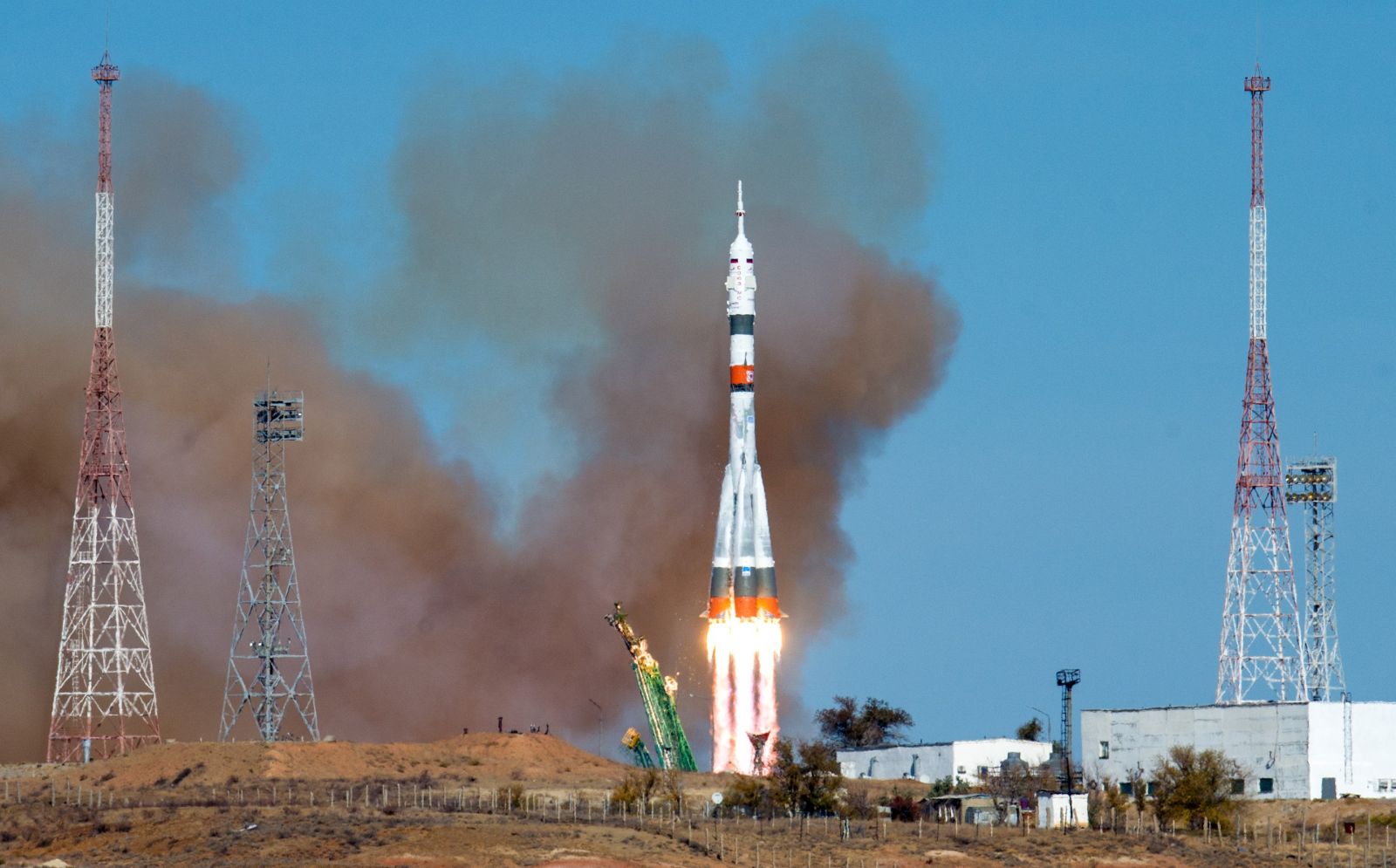 The Soyuz MS-17 launches with the crew of ISS Expedition 64 from the Baikonur Cosmodrome In Kazakhstan on October 14, 2020. Image: NASA/GCTC, Andrey Shelepin

On Wednesday, October 14 at 1:45 AM EDT, three astronauts and their Soyuz MS-17 spacecraft left the Baikonur Cosmodrome in Kazakhstan to begin a six month mission to the International Space Station.

Flying atop the Russian Soyuz 2 rocket, the Expedition 64 crew consists of NASA astronaut Kate Rubins, as well as Russian cosmonauts Sergey Ryzhikov and Sergey Kud-Sverchkov. Docking of the Soyuz occurred at the station’s Rassvet module at 4:48 AM EDT, after completing two Earth orbits following liftoff. The Expedition 64 crew then joined Expedition 63 Commander Chris Cassidy of NASA, and Roscosmos cosmonauts Anatoly Ivanishin and Ivan Vagner, who have been on orbit aboard the ISS since April. The crew of Expedition 63 are scheduled to board their MS-16 Soyuz for a return trip to Earth, currently scheduled for October 21, with Cassidy transferring command to Ryzhikov on October 20.

The Expedition 64 mission will consist of several science experiments for use in human technological developments as well as biological sciences that can only be conducted in the microgravity environment of the International Space Station. The Expedition crew will grow by four additional crew members when the crew of the SpaceX Crew-1 mission arrives at the station, currently scheduled for no earlier than mid-November. 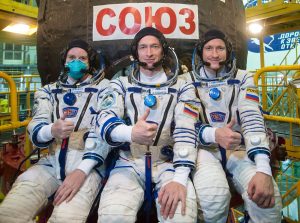 The crew of Soyuz MS-17 and ISS Expedition 64, NASA astronaut Kate Rubins, left, and Russian cosmonauts Sergey Ryzhikov, center, and Sergey Kud-Sverchkov, right, pose for a photo with their spacecraft during a fit check on September 28, 2020 in Kazakhstan. Image: NASA/GCTC, Andrey Shelepin

Expedition 64 marks the second space flight for NASA astronaut Kate Rubins, who celebrated her 42nd birthday by taking the eight and half minute ride to orbit. A microbiologist by trade, Rubins joined the astronaut corps in 2009 as part of NASA’s Group 20 astronaut class. Her first flight into space began as part of the Soyuz MS-01 for Expedition 48/49, during which Rubins spent almost 12 hours working through two EVA excursions. In August of 2016, she became the first astronaut to sequence DNA in space, using a USB-powered micro DNA sequencer.

Russian crew member Sergey Ryzhikov is also a veteran cosmonaut, having racked up 173 days in space during a previous long duration stay on the ISS, in part of which Rubins served as a crew mate. A veteran fighter pilot in the Russian Air Force, Ryzhikov was selected for the Cosmonaut Corps in October of 2006, and made his first spaceflight as part of the MS-02 Soyuz, serving as a Flight Engineer for the ISS Expedition 49/50. Prior to taking command from Cassidy for Expedition 64, Ryzhikov will again serve as a Flight Engineer for Expedition 63.

Fellow cosmonaut Sergey Kud-Sverchkov is making his first flight into space, serving as Flight Engineer for Expeditions 63/64. Kud-Sverchkov was born in the very city he launched to space from, Baikonur, Kazakhstan, and comes to Roscosmos with an engineering background. In 2006, he graduated from Moscow State Technical University with a degree specializing in rocket engines, ultimately working for RSC Energia, the manufacturer of the nations Soyuz rocket and spacecraft, prior to being selected as a cosmonaut in 2010. Both Ryzhikov and Kud-Sverchkov were originally scheduled to be the backup crew for this mission, however crew changes in early 2020 due to a medical problem with the prime crew of Soyuz MS-16 resulted in their being bumped to the prime crew position.

While Soyuz MS-17 marks the 145th crewed flight of the Soyuz spacecraft, it was the first time the spacecraft utilized the “ultra fast” rendezvous method with the International Space Station. This new rendezvous technique consists of the spacecraft completing only two Earth orbits before catching up with the ISS, approximately 3 hours after launch. As MS-17 reaches the end of its scheduled 145 day time on orbit, it will be relocated from the Rassvet module to Poisk, in order to make way for the arrival and docking of the Soyuz MS-18. Soyuz MS-17 is expected to land on April 17, 2021 at Kazakh Steppe Lansing site in Russia.