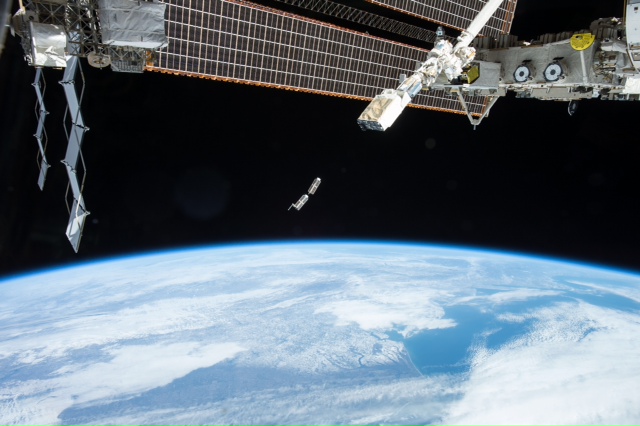 The NanoRacks cubesat dispenser deploying a pair of Planet Labs Dove satellites into orbit from the ISS. Photo Credit: NASA

On Friday, Feb. 27, two small Dove satellites belonging to Planet Labs were successfully deployed into orbit from the International Space Space (ISS). This was the first deployment attempt since the recent completion of on-orbit repairs to the station’s satellite deployment system. More Dove satellites will be deployed through March 15 when the deployment window closes.

Last summer, the satellite deployers, which are built and operated by the company NanoRacks, developed problems that prevented some cubesats from deploying and caused others to deploy when a command to deploy had not been given. Attempts to deploy the cubesats were halted while NanoRacks worked on ways to repair the system. NanoRacks has been working closely with NASA, JAXA, Roscosmos and other ISS partners to repair the deployers currently aboard the station. The repair work included the installation of a new, simplified command system and secondary latches to safe the deployers in case of any operational problems. The hardware for the repairs arrived aboard a SpaceX Dragon cargo spacecraft and the crew successfully installed the new latches on February 17. The first deployment was made as planned ten days later on February 27. The 28 Dove satellites that make up Planet Labs’ Flock 1 mission, seen here before delivery to the International Space Station, will be the largest single constellation of Earth-imaging satellites ever to launch into space. Image Credit: Planet Labs

“Over the last six months, NASA and JAXA have worked tirelessly with NanoRacks to ensure that the on-orbit hardware adaptations make our CubeSat deployers safe and ready for operations. It’s a testament to the ISS Program’s ability to cooperate with commercial partners and utilize the resource they have on orbit.” said NanoRacks External Payloads Account Manager Conor Brown.

The Planet Labs Doves are small Earth-observing satellites designed to be deployed in constellations or “Flocks.” Each satellite is 30 centimeters long, 10 centimeters high and 10 centimeters wide. They orbit the Earth at an altitude of 400 kilometers and can provide imagery with a resolution of 3-5 meters. The Doves deployed on Friday were two of 10  remaining Flock 1-B satellites that were brought to ISS aboard the Orb-2 cargo mission. Two new Flock-1D satellites which came up on the SpaceX CRS-5 mission are also waiting to be deployed. Twenty-six Flock-D Doves were lost aboard an Orbital Sciences Antares rocket during the launch failure of Orb-3.

NanoRack has also developed a new satellite deployment system that can support both cubesats and larger microsatellites weighing up to 100 kilograms. The system, named Kaber, is scheduled to be launched to the ISS aboard SpaceX’s seventh Cargo Resupply Mission.   Welcome to SpaceFlight Insider! Be sure to follow us on Facebook: SpaceFlight Insider as well as on Twitter at: @SpaceflightIns