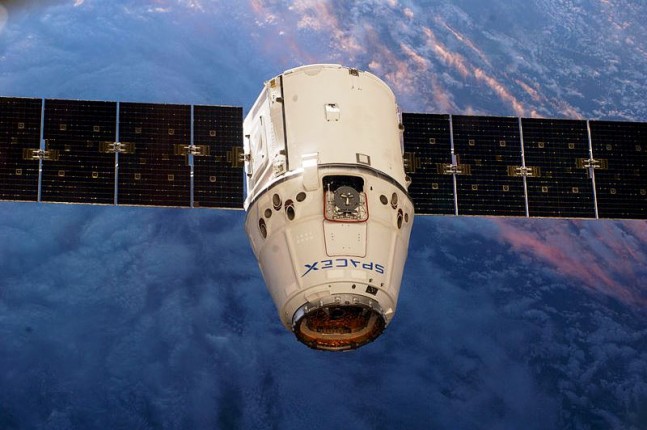 NASA Ames, through an effort carried out by Space Florida flew the "HEART FLIES" experiment to the ISS on the SpaceX-3 mission which launched last month. Photo Credit: Expedition 39 / NASA

Drosophila melanogaster —that is, fruit flies — are the payload, and the goal is to observe the effects of spaceflight on the structure, function and gene expression of fruit fly hearts. It is the first study of its kind.

The project, led in part by Dr. Sharmila Bhattacharya, director of the Biomodel Behavior and Performance Lab at the NASA Ames Research Center and a co-principal investigator for the project, should help scientists understand the effects of spaceflight on the human cardiovascular system and to use that information to create appropriate precautions and treatments for future astronauts.

“Many of the genetic and molecular mechanisms involved in heart development and function are remarkably well conserved between flies and mammals, and sophisticated assessments of Drosophila heart function and structure can be performed,” according to the NASA website.

The payload flies will be compared with a control group of ground-based flies. Two normal strains of the fly are included in the study, along with a strain that is genetically predisposed to abnormal heart rhythms. The flies will be in orbit for about thirty days.

Dr. Peter H. Lee is the principal investigator for the study, and Dr. Rolf Bodmer and Dr. Karen Ocorr are co-investigators with Bhattacharya.

Project HEART FLIES and Project MERCCURI both launched with CRS-3. The other five winners of the ISS Research Competition are currently scheduled to launch on SpaceX CRS-4 on July 25, 2014.